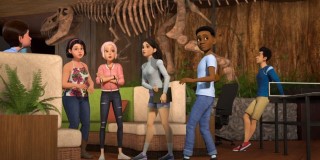 This article has been contributed by Samuel Loh, aka legOtaku.

Camp Cretaceous (2020) follows the story of a group of teenage campers left behind on Isla Nublar in the aftermath of the Jurassic World disaster of 2015.

The Netflix series bridges the gap between Jurassic World and Fallen Kingdom; and sets up shocking developments for next year’s Jurassic World Dominion. 4 new sets based partially on the series have now been released, and I would like to compare their accuracy to the source material. 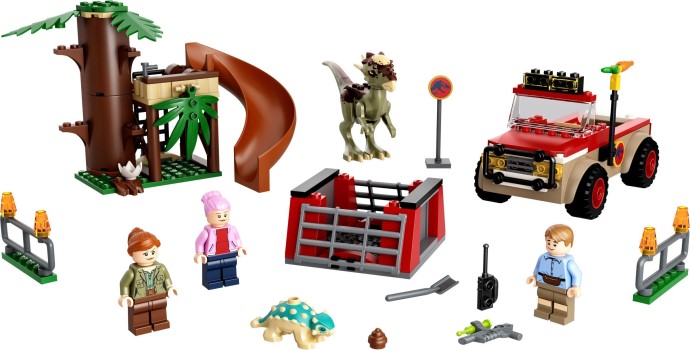 This Juniors set is actually quite accurate. We’ve got a truck based on the classic Jeep Wrangler colour scheme from Jurassic Park, and I’m happy to see they included the red wheels.

The treehouse build is actually Camp Kenji; a survival shelter constructed by the main characters out of the wreckage of Camp Cretaceous after the Indominus Rex attack. The slide actually should be mirrored, but it’s understandable that a new piece was not created.

The minifigure selection is good; although at no point does Claire Dearing interact with the characters or appear physically in the show. Brooklynn is basically a internet sensation while Ben Pincus is a nervous kid who experiences a major level of growth as the story progresses.

The dinosaurs in this set are actually some of the most accurate that Lego has ever produced. Bumpy as a baby has accurate teal printing here as opposed to the unrelated sand green baby Ankylosaurus seen last year. The Stygimoloch is based on the wildland skin from the videogame Jurassic World: Evolution and marks the second time a set has borrowed from videogame material. 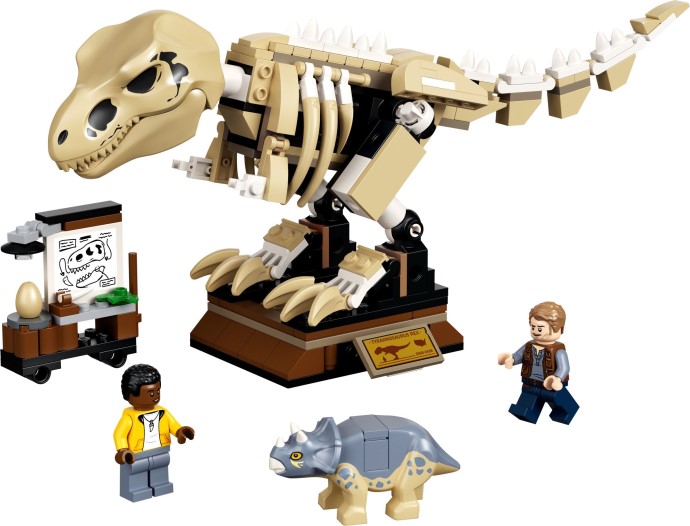 This set (whose title was originally speculated to be T Rex Dinosaur Fossil Escape) draws inspiration from the Samsung Innovation Centre (SIC) seen in Jurassic World. The plaque attached to the excellently built T-Rex fossil mimics the same format as those seen in the SIC.

While a large fossil was not seen in the rotunda, the asymmetrically printed fossil may be based on the various structures seen adorning main street in the film. You could even stretch it to say it’s based on the fossil seen in the common area of Camp Cretaceous based on the branding. Darius Bowman is the teams neo-paleontological expert and the same Owen minifig returns, again. Both are well-designed, but I’m ticked that the latter has to be shoehorned into sets when he doesn’t appear in the show. The sand blue baby triceratops is based on a deleted scene involving Lex Murphy from Jurassic Park. 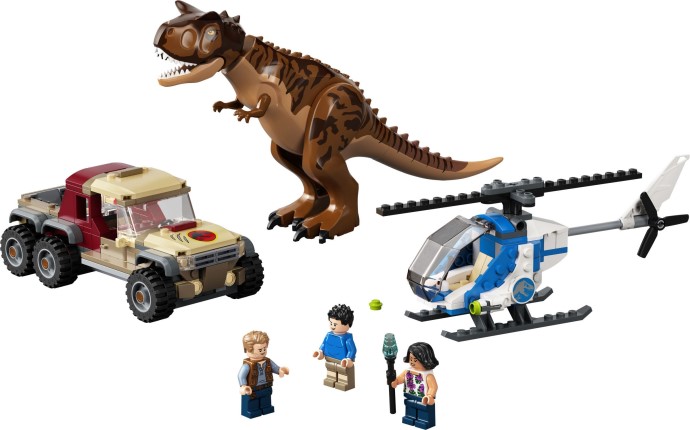 This set takes the highest amount of inspiration from the show and includes one of the threats from Season 1.

Figure 6: Toro the Carnotaur. Note the scar on the right hand side of her head.

Toro the Carnotaur got her scar while pursuing Ben and Kenji directly into a fence and carried a relentless vendetta against the group until she was defeated in the final episode of Season 1. She then briefly popped up again in Season 2 only to be embarrassingly defeated by a transformed Ben and an adult Bumpy.

The dark orange colour scheme looks fantastic and I’m happy that the designers incorporated her asymmetric scar in the printing. Collectors be advised; it is strongly speculated that Toro was one of three Carnotaur present on Isla Nublar; so hang on to your Fallen Kingdom Carnotaur. Kenji Kon is the stereotypic son of a rich investor seen in almost every instalment of the franchise; while Sammy Gutierrez is a farmgirl who was sent in to spy for Mantah Corp; a shady company which may be tied to the plot of Jurassic World Dominion. Also, there’s another Owen minifig.

The truck is meant to be a Mercedes AMG 6×6 which has had all the branding stripped off of it. However in the process of dodging the licensing most of the traits from show’s model have been stripped. The wheels are grey and not red, the main body should be light grey not tan and most of the distinctive features of the real life vehicle such as the front bumper have been removed. But this is still an important step forward in terms of media accuracy and I appreciate that we finally have the roof piece in tan for the cloth top of Jeep Wranglers. The helicopter bears resemblance to 75915 but doesn’t appear to resemble anything in the show. 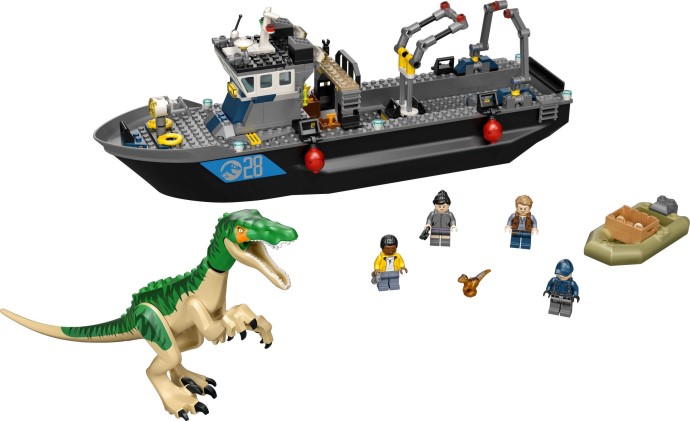 This set is honestly just a bizarre mish-mash.

The boat bears no resemblance to anything in current media, but may have drawn inspiration from the Arcadia in its concept; the landing-ship-tank (LST) cargo ship seen in Fallen Kingdom transporting dinosaurs to the mainland. A boat does appear in Season 2 of Camp Cretaceous, but it’s a medium-sized black pleasure yacht. It belonged to dinosaur poachers Mitch and Tiff who attempt to silence the campers only to be eaten alive for their efforts.

Figure 9: Chaos, Grim and Limbo from left to right.

Further, the trio of Chaos, Limbo and Grim are introduced of which the latter is the inspiration for the Baryonyx in this set. Grim was fatally shot by Tiff and Chaos is strongly speculated to be same individual from Fallen Kingdom as well as 75935. Grim’s green colour scheme and orange head highlights are accurate to the show model; in spite of reusing the same inaccurate raptor claw leg designed for the Indoraptor.

The boat’s is sparse in features due to the need to accommodate the dinosaur capture equipment and the set also comes with 2018’s baby raptor. Yazmina Fadoula is the team’s athlete and her leg print is neat to have. Darius, Owen and the ACU trooper are reuses from other sets.

Overall I’d say this whole wave is fairly accurate; which is pretty good in terms of Jurassic World sets. The designers have attempted to work around the design limitations and have taken some important steps forward for future sets such as the asymmetrical printing and balance of location based sets.

The dinosaurs are top par as usual and the minifigs do reflect their show counterparts in most respects. However it’s still not quite there yet as the elements seem to have been hurriedly thrown together; having taken inspiration only from the general details of the show it is based on.

The campers could have benefited from the use of medium legs though I understand that could have cost the designers element tubs for other necessary parts. Darius and Ben are portrayed as their Season 1 appearances and have not yet been updated to reflect their changed outfits.

So why was this the case? With the pushback of Jurassic World Dominion to 2022; the sets meant to be released this year were accordingly moved back as well. Thus the need for new sets to be redesigned in a very short timeframe to fill the void. Elements from potential sets were thus strapped together and rebranded as Camp Cretaceous for this wave. It’s frustrating, but I’m still looking forward to next year as the series will venture into unknown territory in both the story and in the brick.

The new sets were released on September 1st and can be bought here. If you are interested in looking at more Lego Jurassic World content; please consider following me on Instagram at legOtaku (where I build the dinosaurs Lego hasn’t got around to yet).