Take LEGO Ideas 21325 Medieval Blacksmith from a world of knights and castles to one of dragons and magic with a fantasy-themed expansion, and a retiring Jurassic World set.

Hachiroku24 is back with another fan-made build, this time tackling a way to grow a LEGO Ideas set beyond its medieval borders, and instead embracing otherworldly elements with adventurers facing a dire dragon dilemma.

The diorama has been shown off on YouTube and includes a guide on how to build it for yourself. Within the build, warriors of all shapes and sizes are coming to the blacksmith to gear up before facing the prehistoric pest that sits atop a nearby tower.

If you fancy recreating the model for yourself, then you’ll need two sets specifically with 21325 Medieval Blacksmith playing a pivotal part in the build. If you don’t happen to own the LEGO Ideas instalment yet, then read our review to find out why it should also play a pivotal role on your wishlist.

The second set you’ll likely need to recreate the display exactly is Jurassic World’s 75935 Baryonyx Face-Off: The Treasure Hunt, which is due to retire in July according to Brick Fanatics’ sources.

The Jurassic World model may not have much longer on the market but if you prefer, you could switch out the winged Baryonyx for a dragon of your own design, or maybe even something more sinister such as NINJAGO 71742 Overlord Dragon, which we’ve reviewed too. 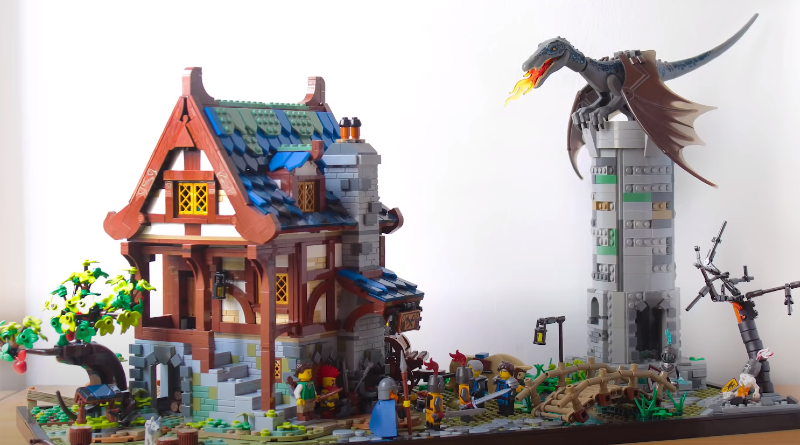