The first LEGO Marvel Eternals set has popped up on LEGO.com – but probably not in the way anyone was expecting.

We’ve already seen a first glimpse of the four Eternals sets courtesy of the January consumer catalogue, but we’re still waiting for an official reveal – along with any hint of a firm release date. The accompanying Marvel Cinematic Universe movie has been pushed back to November 2021 as a result of the pandemic, an entire year after its original premiere date.

Rather than releasing any of its four planned tie-in products early, though – as it did with Minions – the LEGO Group seems to have postponed them to later in the year. Now, the first of those sets has arrived on the United Arab Emirates region of LEGO.com, suggesting they may actually be launching pretty soon.

76155 In Arishem’s Shadow probably isn’t quite what you’d call a complete listing, though: there are no official images, and you won’t find it on (for example) the UK, US or German versions of LEGO.com. Most likely it’s simply been added in error, which puts us right back to square one with regards the release date for the LEGO Marvel Eternals sets.

It has given us a full product description for 76155 In Arishem’s Shadow, however, which offers a little more context to the characters included in the set:

Kids join forces with 4 Eternals to defeat a Deviant bat. The Eternals have cool powers: Ajak is the only one able to communicate with the powerful extra-terrestrial beings, the Celestials; Sersi transforms matter into whatever she desires; Ikaris has superhuman strength; and Kingo can blast terrestrial energy. The set also includes a posable Celestial figure that can hold an Eternal minifigure in its hand. And, if you’re buying for a minifigure fan, this awesome LEGO playset is the only one to feature the Ajak and Kingo minifigures!

Next up on the Marvel slate is Shang-Chi and the Legend of the Ten Rings, the tie-in sets for which have just been officially revealed (but were hardly a big secret). We’ll keep you posted on a launch date for both those and the Eternals sets. 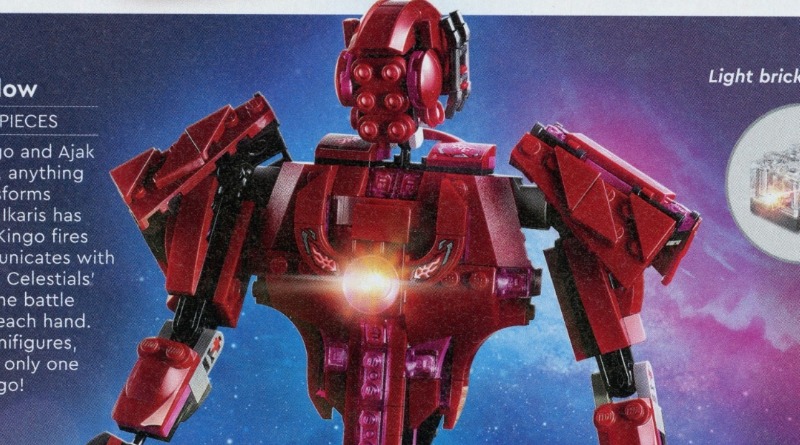