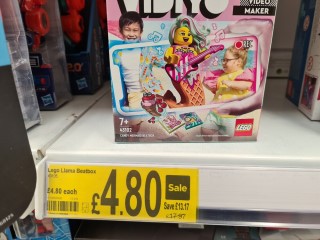 Vidiyo was launched with much fanfare at the beginning of March, with a range of unrealistically priced sets accompanied by a flaky, sluggish and demanding app, if some of the reviews at the App and Play stores are to be believed.

In the UK, the six BeatBoxes have an RRP of £18 but every large retailer other than LEGO.com and The Entertainer has reduced the price to £12 now, and it seems that ASDA has them on clearance already, as this photo by freethegeekman on Twitter testifies.

So, I wonder, what’s the situation like in other countries? Have they been reduced where you live? Do you think they are selling well? Are your kids enjoying them? Do you think the theme has flopped, or is it too soon to write it off?