As LEGO stores around the world receive makeovers, a record-breaking store opens up in Sentosa, Singapore.

Near the Universal Studios Singapore globe, the 3,165 square foot retail location is larger than the current biggest shop in Suntec City. We’ve already seen that the LEGO Group has introduced various new elements to their stores, like the range of experiences available at the flagship New York location, and this one is no exception.

The Sentosa shop will feature a Mosaic Maker, so you can take home a personalised image of yourself in a brick-like format. In keeping with being the biggest store in the region, it will also house the largest Pick A Brick wall as well, where you can choose from more than 128 choices of LEGO pieces.

Various Singapore-themed builds can also be spotted around the location, including an ‘I Heart SG’ sign and a lion dancer model otuside the entrance, made up of 70,950 LEGO bricks.

“At the LEGO Group, we continue to innovate new play themes and experiences for children and adults alike,” Cesar Ridruejo, General Manager, Southeast Asia at the LEGO Group, told Geek Culture. “The opening of Southeast Asia’s largest LEGO Certified Store here in Singapore epitomises this, with new features such as the first-ever LEGO Mosaic Maker in Southeast Asia and the prominent inclusion of adult fan creations that demonstrate the endless possibilities one can imagine and create with LEGO bricks.”

The new LEGO Store open on 25 June and, as with all store openings, there are some special offers to snap up. Gift-with-purchase LEGO Sentosa Arcade sets are exclusive to the store, including Mini Hockey, Bumper Cars, Arcade Machines, and LEGO Ideas Generator. You’ll need to spend a minimum of Singaporean $88 to take one of the items home, only available while stocks last. 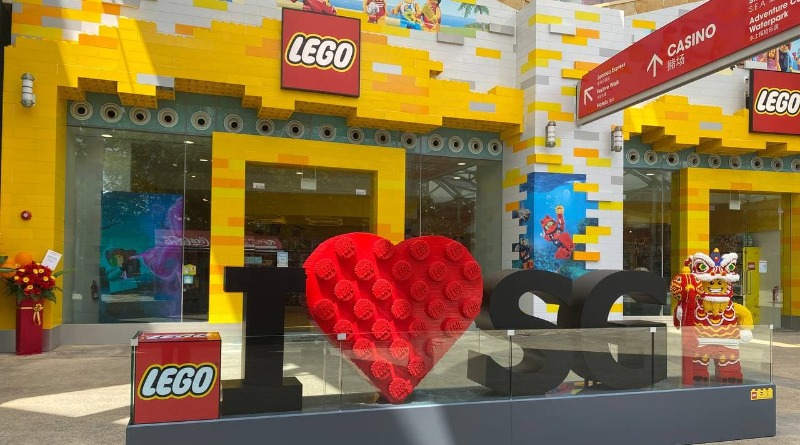