The sun is shining again and with spring around the corner, Brick Fanatics examines whether 40461 Tulips might just see anthophiles blossom into fully-fledged LEGO fans.

It’s not the first time the LEGO Group has produced a tulip-themed set, but with the recently-released (and currently still sold out at LEGO.com) 10280 Flower Bouquet showcasing exquisite advances in realistic design, it makes perfect sense that a new tulip model is available alongside the new adult-targeted Botanical Collection range.

Sometimes a LEGO build can be deceptively complicated or parts-intensive despite outer appearances, but in the case of 40461 Tulips it’s mostly a matter of what you see is what you get.

As depicted on the front of the box there are three tulips included within the set, each one in a unique but altogether cohesive and spring-appropriate colour palette of white, bright light yellow and lavender.

Each flower head is built first in exactly the same fashion but with different coloured bricks for added variety. Making use of the supremely useful modified bricks with studs on three sides, we’re able to construct an entirely studs-out cube on top of three 2×2 round plates allowing the flower head to be built outwards rather easily.

It’s interesting to note that each flower makes use of two lime green 2×2 round plates, with the third closely matching the colour of the petals. The exception is the lavender tulip, which unfortunately repeats the yellow plate – most likely because a 2×2 round plate doesn’t exist in lavender at the time of writing this review. It’s not a major eyesore by any means, but it does seem like a missed opportunity for a new element re-colour.

Each petal side has a downwards-facing 1×2 cheese slope below a 3×2 curved slope with studs and wing end and, as simple as that sounds, it really achieves the perfect look. A single 2×2 jumper plate on the top/inside of the ‘cube’ with an added plant flower stem completes the tulip head.

The build concludes with the flower stems and the sight of the rarely pleasing ‘3x’ symbol. The easiest and least time-consuming approach for many builders is to tackle all three simultaneously, but should you have any family members or curious onlookers nearby now is the time to get them involved.

Comprising mostly of lime green Technic axle connectors and red notched axles, it’s a pretty easy build, and unless you have trouble lining up axles or especially weak finger muscles, there shouldn’t be any issues here.

Within each of the botanical-themed sets from the LEGO Group in 2021, the leaves have been represented by an assortment of techniques and elements, with 40461 Tulips employing the use of a Hero Factory blade/weapon for the job. First introduced in 2014 and appearing in no less than 44 sets since then, the Hero Factory weapon makes its debut in bright green for this set.

With two leaves allocated per flower, the assembly line of stems is complete and once inserted into the flower heads, LEGO 40461 Tulips is ready for display.

Until the day comes where we see a LEGO Honey I Shrunk The Kids-themed set, minifigures wouldn’t be appropriate (nor to scale) here. Therefore, no minifigures are included in this set.

It’s a very reasonable price, and with plenty of seasonal opportunity coming up it unfortunately appears destined to be yet another LEGO.com/LEGO Store-exclusive that’s slightly challenging to get hold of.

Not all LEGO sets are destined to be purchased by everyone, which in many ways is the beauty of LEGO collecting. Hundreds of sets are released each year with a multitude of price ranges, number of pieces and themes. With that in mind, it’s clear that 40461 Tulips won’t be a set that automatically appeals across the board – but does that make it a bad set? Absolutely not.

The white, yellow and lavender colours of the petals here make for a bright and jolly selection, but it’s almost a pity more pieces weren’t included, allowing for a single colour choice if preferred. It’s also worth noting that while the brightly-coloured lime green stems work well as a standalone set, it does stand out a bit more when placed alongside the darker green stems from 10280 Flower Bouquet and 40460 Roses. This is just nit-picking, though, because at this price there really isn’t much to complain about.

If the LEGO Group is hoping to grow its adult market with these gateway models, then it’s definitely going the right way about it. 40461 Tulips is a satisfyingly simple build, but the end result is aesthetically pleasing – and if you already own either of the other flower models from 2021, you’re going to want to add this set to your collection. 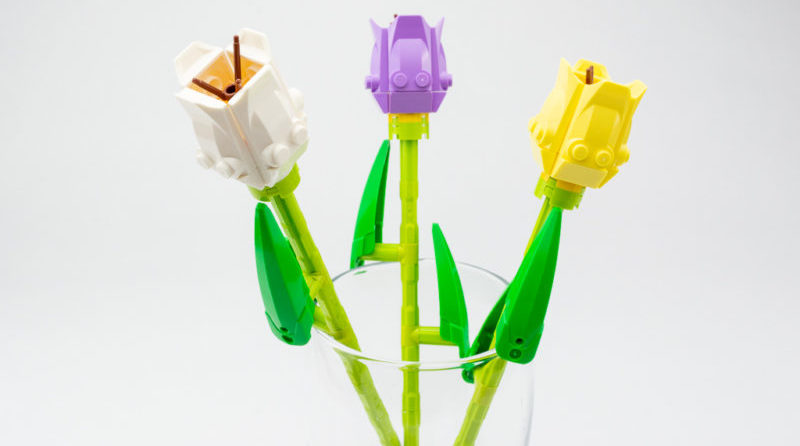