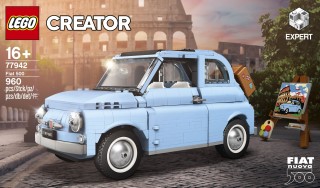 Following their accidental unveiling during August, LEGO has officially revealed five new sets which are variations on existing models.

These five products comprise a pilot scheme, assessing how customers respond to various colours and versions of each model, with their performance at different retailers.

Unfortunately, availability of these sets will be limited to the UK, which has been chosen as a representative market. The models have been released today and will be available until the 30th of November, or while stocks last.

Here is The LEGO Group’s official statement regarding this pilot:

The LEGO Group is running a pilot with a small number of products to gain a deeper understanding of what our fans want from our portfolio and where they prefer to shop for new or unique products.

The pilot includes variations of some of our existing products, so we can find out more about the colours and sizes of sets that fans of all ages want to see more of in our portfolio.

The five sets in the pilot are:

Enjoy thrilling prehistoric adventures with this cool 3 in 1 Mighty Dinosaurs playset. Watch out for the powerful brown T. rex as they stalk their prey! For even more action, you can rebuild the T. rex into a fearsome Triceratops with three sharp horns or a Pterodactyl ready to rule the skies. The choice is yours with this brilliant 3 in 1 set.

Enjoy thrilling prehistoric adventures with this cool 3 in 1 Mighty Dinosaurs playset. Watch out for the powerful blue T. rex as they stalk their prey! For even more action, you can rebuild the T. rex into a fearsome Triceratops with three sharp horns or a Pterodactyl ready to rule the skies. The choice is yours with this brilliant 3 in 1 set.

Build an icon of Italian automotive design with this LEGO Creator Expert light blue Fiat 500 model. All the details of the classic 500F legend from the late ‘60s are there in colourful LEGO brick form, such as the opening roof, luggage rack and detailed interior. It even comes with a folding easel and a miniature painting of the car in front of Rome’s Colosseum for that extra touch of ‘La Dolce Vita’!

Boom! An electrical cabinet has burst into flames. Time to mobilise the LEGO City firefighters! Roll up the Fire Station door, launch the fire response buggy, jump aboard the motorbike and head to the scene of the fire. Use the extinguisher and shoot the buggy’s water cannon to knock out the flames. When you’ve secured the area, head back to base and prepare for your next mission!

Join the firefighters and fire dog at the LEGO City Fire Station Headquarters. This 3-level control centre is packed with cool equipment. Slide down the fire pole and roll up the garage doors to deploy the 4×4 and the huge fire truck with its cherry picker and extra-long fire hose. Then head for the helipad to launch the awesome fire helicopter. Prepare for the ultimate in firefighting action!

What is your opinion of the product pilot and these sets? Let us know in the comments.

Brickset recently participated in an interview with Lena Dixon, Senior Vice President of Product Development, and Mike Psiaki, Senior Designer, on this topic. We will be publishing information from this interview during the next couple of days, but will also be responding to questions in the comments.