The #60258 LEGO City Tuning Workshop was introduced in 2020, and it is still considered one of the best recently released LEGO City sets. It features a substantial building (the tuning workshop), five vehicles, and a whole bunch of accessories and characters. It is an excellent starter set for building a LEGO city, a booster for an already established city, and it is even of interest to those who collect the LEGO Modular Buildings. Let’s take a look.

The set comes with six separate instructions booklets; five for the vehicles, and one for the tuning workshop itself. What I find most impressive about the vehicles is the great variety. The first instruction booklet is for the tiny blue car and the very cool dark-orange motorbike. Note that this is a new version of the classic style bike that so far only appeared in a handful of sets, with the dark-orange variation exceptionally rare.

The second instruction booklet is for the small camper, as well as the doghouse with a new bulldog design that is exclusive to this set. The classic-style camper is one of my favorite vehicles, and it looks just as cool in real life as in pictures. Here, the camper serves as an advertising platform and small office for a car dealership that sells ) “dodgy cars at bargain prices” (according to the official set description), but it could also be modified into a regular camper. The interior can be accessed through the side door, and there is also a large opening flap on the other side for more access. Note that the only vehicle that has a trailer hitch to pull the camper is the little blue car, but of course, you can easily modify other cars to pull it as well. 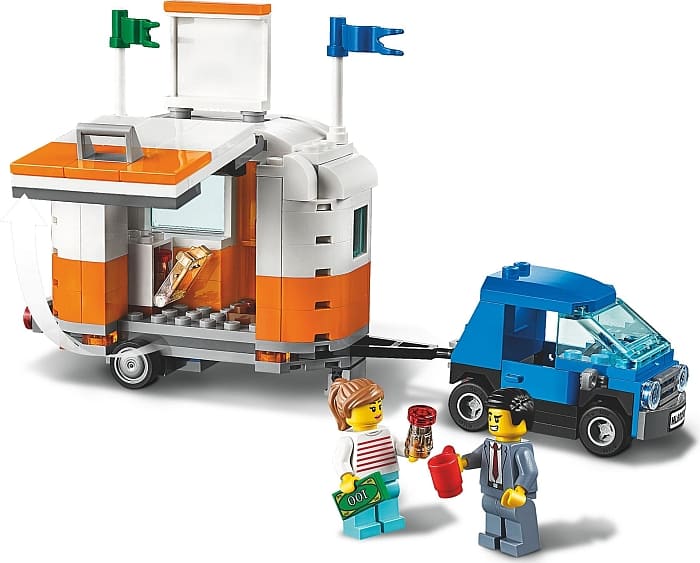 The third instruction booklet is for the lime-green sporty-looking car. This is a simple but solidly built 6-stud wide vehicle with enough room for one minifig and maybe a bit of luggage. It looks good with our without the included stickers.

While all the vehicles are good models, I do feel that their scale and size are not consistent and kind of all over the place. They are all designed to fit one minifig, but their width is anywhere between four studs to eight studs. The tow truck and the lime-green sports car work well together. But they look too large next to the other vehicles. So, if you want to use them all, you may want to see which size works best for your city and either modify the other ones to match the scale, and use the others for another project, or just eliminate them. 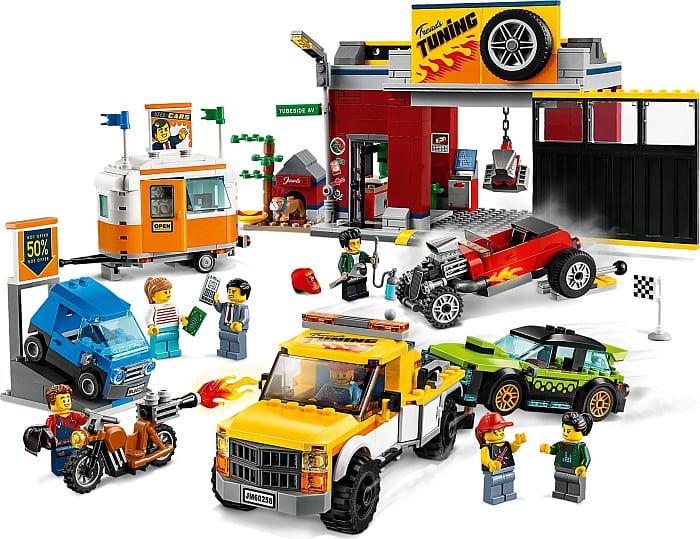 The sixth instruction booklet contains the steps to build the tuning workshop. This is a 14×22 stud building, fully built-up on two sides, and open on the other two sides and the top. The garage door slides to the sides, and there is also a separate entry for customers. The inside is nicely built up with a workbench and tools, and there is also a working engine hoist that can move side to side and up and down (operated by a slider and a knob). I love the two printed welding visors (one dark-blue and one red) that are exclusive to this set. 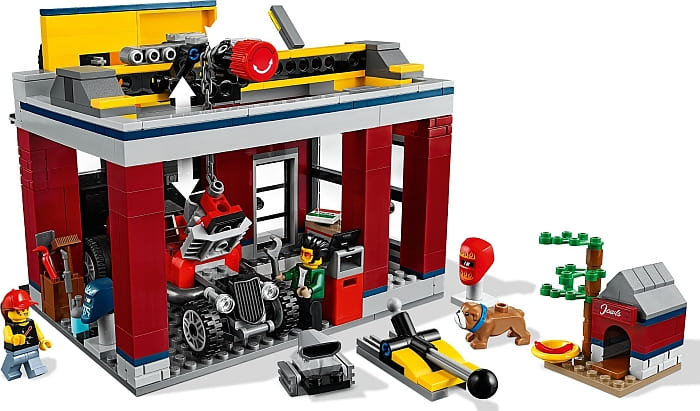 The set also features seven minifigs, all with nicely detailed torso prints. You even get one minifig that is exclusive to this set. The dark-green jacket of the little dude named Tread Octane only ever appeared in this set.

Although the repair shop is ready to be added to a LEGO city as is, the design and color-scheme are so nice, that some LEGO fans got inspired to turn it into a larger building compatible with the LEGO Modular Building collection. In the example below, LEGO fan KTBrickworks placed on the garage on a standard 32×32 baseplate, filled up the two open walls, added a roof as well as a little garden at the side. This is the simplest modification to make the garage compatible with the LEGO Modular Buildings. Instructions and a parts-list for this model are available at Rebrickable.com. 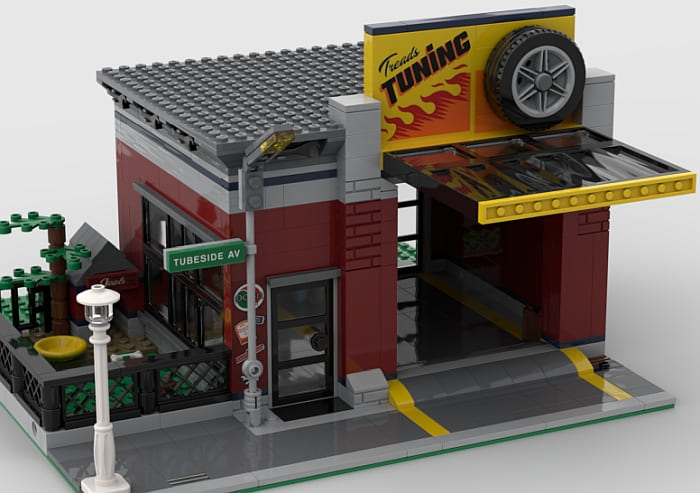 Another option is to add upper floors over the garage to match the height of the LEGO Modular Buildings. This could be done in several ways, but to give you an example, I included a video below by MrBookieboo. He added a second floor over the garage using the same color-scheme and architectural style, and I love how he blended it with a modified version of the dark-tan building from the #76108 LEGO Super Heroes Sanctum Sanctorum Showdown set.

To recap, the #60258 LEGO City Tuning Workshop is one of those sets that gives you plenty to work with; a great variety of vehicles, a nice building that can be used as-is or modified to your liking, a large selection of minifigs, and useful accessories. And as I mentioned the set has several exclusive and rare elements as well. The dark-green torso, the two printed welding visors, and the bulldog are exclusive to this set, and the motorbike in dark-orange is very rare. Overall, I’m very impressed by how much is crammed into this 897-piece, $100 set. If you want to check it out, it’s available at the LEGO City section of the Online LEGO Shop.

What do you think? How do you like the LEGO City Tuning Workshop? Do you have this set already? Did you modify it in any way? Feel free to share and discuss in the comment section below!