LEGO NINJAGO 71753 Fire Dragon Attack remakes a classic set for a new generation, stoking the flames for a set that has a legacy to live up to.

NINJAGO Legacy has served up an interesting collection of models since its launch in 2019, recreating iconic creatures, characters and vehicles from previous waves of NINJAGO, in recognition of an updated parts catalogue and new design techniques.

71753 Fire Dragon Attack tackles a new design for a secondary build in 2507 Fire Temple, a full 10 years after the set was originally released, with a striking design that showcases how far the LEGO Group has changed in the past decade.

All 563 pieces of 71753 Fire Dragon Attack, apart from those used for the minifigures, go into the main event: there are no side builds here. And it’s with great effect, because whatever position you choose to display the model in, the detail and lifelike shaping of the dragon is impressive, with plenty of pose-able parts to fit any situation.

The sculpted body of the dragon features a yellow underbelly and a mix of red and dark red on the back, combined with black spines that use building on the side to achieve a simple but effective look. Attached to the body – which makes up the largest structure of the brick-built creature – are two wings and a pair of legs.

Each of these continues the colour scheme of 71753 Fire Dragon Attack, with blends of yellow and red for the top and bottom of the creature respectively. The clawed feet attached to the legs provide a wide enough base to keep the dragon stood up straight, though be prepared for the claws to give way if you lean it too far forward.

The wings are an especially impressive part of the set, replacing the brick-built and mostly bare structure used in the original model with an exclusive fabric design. The elemental look of the wings feature black spines with flames burning from them, and once the arms have been raised, they can be folded out to form an intimidating brick-built beast.

Moving to the head of the creature, the neck features the same red and yellow design with black bars that can hold a saddle using a pair of clips. This allows you to imagine the dragon as tamed or untamed, and the unique moulded head recalls the traditional look of the original Fire Dragon, scaling it down and removing the play feature in a change that helps the set feel more realistic – while still remaining suitably fantastical.

Unlike other LEGO NINJAGO dragons, 71753 Fire Dragon Attack’s only play feature comes through its articulation, meaning that it is well-suited for both play and display. Despite being a recurring subject for NINJAGO, this latest dragon build is a fine demonstration of just how far the LEGO Group has come over the past decade.

The most desirable minifigure in 71753 Fire Dragon Attack is the exclusive Golden Legacy Nya, featuring a new piece depicting a combined hair and headband in Nya’s signature blue colour. This minifigure is one of seven golden characters that have been released throughout 2021, as just one of the many celebrations of NINJAGO’s 10th anniversary.

A detailed golden design recalls elements of the aquatic look that Nya can be seen sporting in Seabound, as well as streaks of blue. The character’s symbol can be found printed on the back, completing the look of the Golden Legacy minifigure. A mask and sword holster are also included as accessories.

A stand with the ‘NINJAGO 10 Years’ printed piece finishes things off, matching with the other six Golden Legacy minifigures. Keeping to the in-universe time period of 71753 Fire Dragon Attack – the first season of LEGO NINJAGO – three other minifigures are included that are based on or inspired by the first season of the show.

Kai is first, representing the element of fire, befittingly for a set featuring a fire dragon. He wears red robes, a hood and the same neck element that debuted in 2020. His head has two faces, with both a cheeky smile and a determined look depending on your preference. The Sword of Fire is also included for the minifigure to hold, with the same, detailed mould that has been in many other NINJAGO models.

Zane is the third of the ninjas to be included, not depicting his yellow-skinned form as he appeared in the first season of the show but instead his modern Nindroid look.

Zane sports white robes and a hood with the same holster as Kai, giving the duo a uniform look – and similarly to Kai, he comes with his Golden Weapon, the Shurikens of Ice.

A skeletal foe completes the selection of minifigures in 71753 Fire Dragon Attack, in what is one of the most outmatched confrontations in a LEGO set to date. Wyplash makes use of the classic skeleton piece from the original wave of NINJAGO, with a blue cloth and metal implants in the ribcage. The exaggerated head mould features a missing tooth and glowing red eyes, with a connecting stud for a hat.

Facing off against the three ninjas and the huge fire dragon, Wyplash brings a simple sword and shoulder pauldrons as the only accessories. Neither of the last three minifigures will be deciding factors when it comes to whether or not you buy 71753 Fire Dragon Attack, but their inclusion is still appreciated.

Compared to other 2021 NINJAGO sets, the price-per-piece ratio of 71753 Fire Dragon Attack is just as generous, though lacks a minifigure when stacked up next to both 71737 X-1 Ninja Charger and 71747 The Keepers’ Village, which are the same price. However, the four included minifigures don’t detract from the set’s value, given the quality of the main build.

71753 Fire Dragon Attack is one of LEGO NINJAGO’s most visually-pleasing brick-built beasts to date, paying respect to the original design while introducing new elements and features that help it stand out.

Although the majority of its minifigure selection leaves something to be desired, the same cannot be said for the main model, which delivers a lifelike draconic recreation with an impressive wingspan and a striking design.

71753 Fire Dragon Attack is an excellent introduction to NINJAGO for new fans, but also has plenty to offer veterans, too. It’s one of the most impressive builds in the theme to date – at least where its dragons are concerned – and a clear representation of the progression we’ve seen across the past 10 years. You can’t ask for much more from a set designed to celebrate a decade of NINJAGO.

Support the work that Brick Fanatics does by purchasing your LEGO NINJAGO sets using our affiliate links.

How long does it take to build LEGO NINJAGO 71753 Fire Dragon Attack?

The building experience provided by LEGO NINJAGO 71753 Fire Dragon Attack will take around one hour and 15 minutes to complete – longer than you can usually expect for a set of this price.

How many pieces are in LEGO NINJAGO 71753 Fire Dragon Attack?

How much does LEGO NINJAGO 71753 Fire Dragon Attack cost? 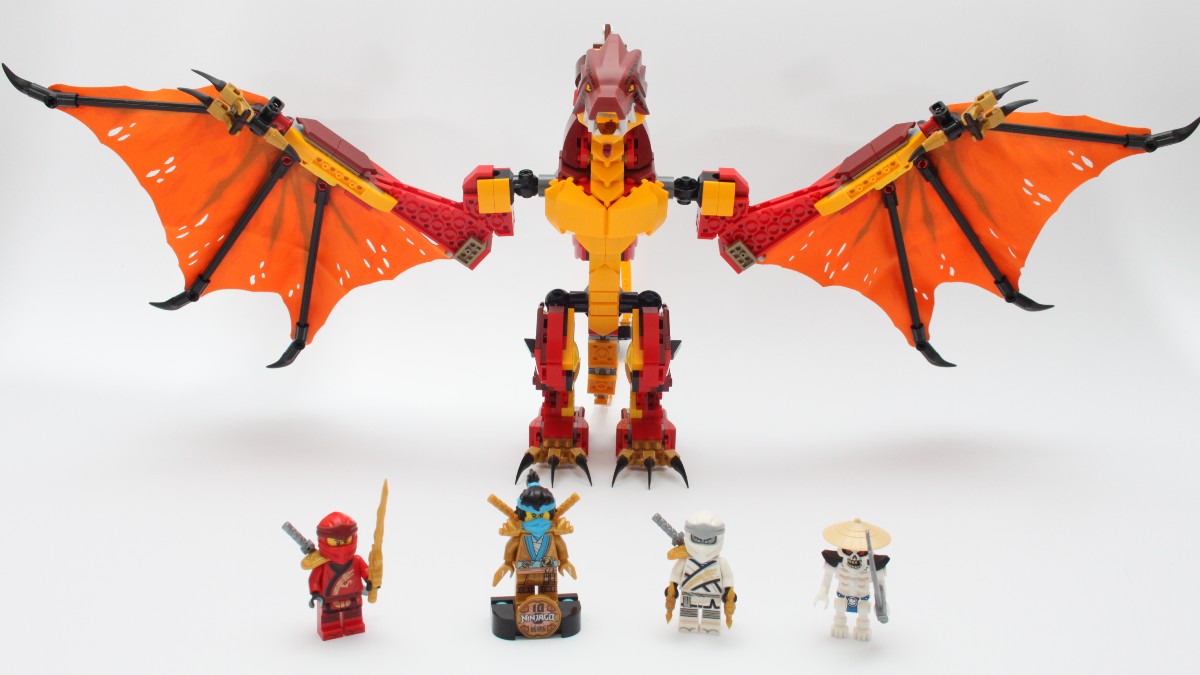