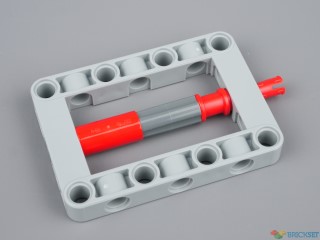 Last week we wrote an article about being unable to dismantle some subassemblies in 75313 AT-AT. It became our most-read news article ever after being linked to by the communities on Reddit, HackerNews and elsewhere. Several YouTubers even made videos about it.

On Tuesday Vice.com ran a story on the subject, and it seems that it managed to elicit a response from LEGO:

“All LEGO sets are designed to be rebuildable, including the LEGO Star Wars AT-AT.

“This set is a complex build intended for those aged 18+ and uses Technic pieces to secure elements of the set. Once assembled, these pieces can sometimes be more difficult to take apart, but it is still possible. In the case of the elements that attach the upper body to the lower part of the set, builders should tap to the side of the Technic rod until it starts to stick out and then remove it using the LEGO tool which is provided with the set. Alternatively, you can ease the model onto its side and the rods will come out.

“Regarding the pieces used to construct the legs; once assembled the Technic rods can be removed by pushing the rod from one end and securing the end of it with your fingernail. Then push back the cross-axle extender and keep repeating this movement until enough of the end protrudes out to be able to remove it.”

I can accept that tapping the rods holding the body onto the legs might dislodge them enough to be able to remove them, but I’m pretty sure that the assembly used in the legs can’t be disassembled using the method described. There is just not enough play between the elements to push the end of the axle out far enough to be able to grip it.

So, LEGO does not want to admit that it’s an oversight in the design, then…

Thanks to RonnyN for the news.