The LEGO Star Wars designers have revealed how they’ve ‘changed strategy’ to get popular minifigures into cheaper and more accessible sets.

For a while, the modus operandi of LEGO Star Wars seemed to be that the most desirable characters – particularly the villains – were walled off behind the theme’s most expensive sets. But that’s changed in recent years, with minifigures including Darth Vader, Maul and Ahsoka all available in much cheaper products.

The latter two, for instance, are both about to hit shelves in a single box with 75310 Duel on Mandalore. And according to LEGO Star Wars Creative Lead Jens Kronvold Frederiksen, that’s a deliberate shift in policy to bring those desirable minifigures to a broader and younger audience.

“We have changed our strategy a little bit over the years,” Jens explains to Brick Fanatics during the recent LEGO Fan Media event. “Where in the past, we often kept some of them – the most important especially – for the higher prices, we are now thinking young kids, maybe newcomers to Star Wars, want to get into it.

“And if you are a newcomer to Star Wars, you want some of the most iconic and well-known characters – not all the niche stuff that you get to know when you’re deeper into it. So that’s also why we’ve done this and made [these characters] more accessible at low prices.”

Is the flipside of that changing strategy, then, that more obscure characters are left for those more expensive sets?

“No, it’s not,” Jens says. “It’s not a set strategy or anything. It’s more that we are aware that some of the stronger characters should also be available in smaller sets. That’s really what it’s about. We will always try to satisfy everybody, [including] the people who are much more into the universe than others.”

This new direction for LEGO Star Wars – one that’s also seen the likes of Beskar Mando and Grogu show up in a sub-£30 set in 75299 Trouble on Tatooine – also speaks to a criticism often levelled at not just the theme from a galaxy far, far away, but several of the LEGO Group’s product lines that are driven heavily by minifigures.

“There’s often a lot of speculation that we’re reserving certain characters for certain sets to try to drive some sales in that set,” says Design Director Michael Lee Stockwell. “But really and truly, what we’re trying to do is to make the right match of characters with a vehicle or scene to best reflect what’s going on in the film that we’re representing.

“It’s a puzzle to try to get it all to work out. And we have many, many meetings back and forth with Lucasfilm and Disney to try to get all those puzzle pieces in the right spot. It’s quite difficult actually.” 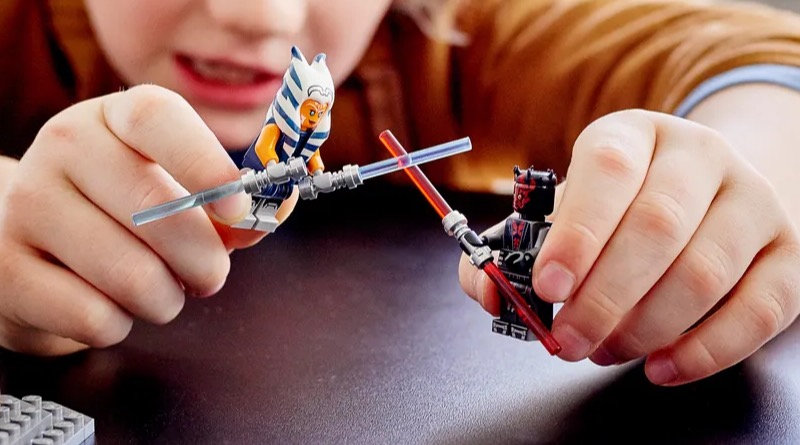