“Golden Hour,” the very first fan-made short film developed and discovered on LEGO World Builder, has officially been released by the LEGO Group! LEGO World Builder is a first-of-its-kind story development platform from the LEGO Group and Tongal, giving LEGO fans and creative talent around the world direct access to the LEGO Entertainment Team to collaborate on original stories, shows, and more. We talked about the platform several times (see links at the end of this post). 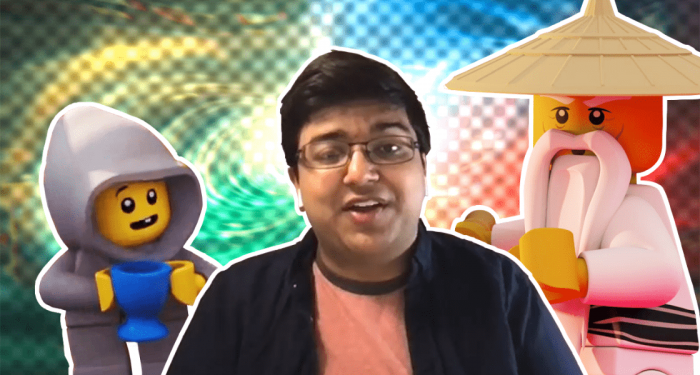 “Golden Hour” is a spinoff of the Ninjago saga created by Uday Kataria, a lifelong Ninjago fan. Uday pitched his idea for the LEGO Ninjago Legacy digital series after asking the question, “What would I want to see as a fan for the 10th Anniversary of LEGO Ninjago?” Uday’s story explores a much-debated storyline hole that LEGO Ninjago fans regularly discuss; what happened to Sensei Wu when he fought the Hand of Time in the Time Vortex battle, and then showed up as a baby in the ‘Sons of Garmadon’ season? Watch the video below!

Awesome, isn’t it? The video may also make you wonder what is it like to run a successful project on the LEGO World Builder platform, and to work along with the LEGO creative team. In the following interview and behind-the-scenes video, Uday talks about his experience. He even got to collaborate with Tommy Andreasen, the co-creator of the LEGO Ninjago TV show, on his idea!

My name is Uday Kataria, and I’ve been a fan of LEGO since I was 9 years old. Growing up, I played with LEGO bricks often, but didn’t really get into the toys with a passion until the release of the 2010 Harry Potter sets. After that, there was no tearing me away! Over the years, I’ve accumulated a large collection of sets, including my favorite themes Ninjago, Harry Potter, and Marvel Super Heroes.

However, sets aren’t the only reason I love LEGO. The Ninjago television series hooked me from the beginning, turning me into a ninja fanatic. The early seasons are still my favorite, since nothing can beat the nostalgia of my favorite heroes fighting against skeletons, snakes, and the Overlord’s Stone Army. I’ve been watching the show since the pilot episodes, following along with each new season and continuing to buy the sets even as my interest dipped in high school. I never fully left the fandom, though, and getting back into the series throughout the development of this project has been one of the best parts of the whole experience.

“Ninjago: What If…?” was a concept I had quickly developed after hearing about the launch of the first LEGO World Builder creative prompt. Alternate realities are a sci-fi trope that I love, so I applied that concept to Ninjago with the goal of splitting the ninja into teams and scattering them throughout the past, where they would face drastically different realities as the result of one significant change in each previous season. This twist would have played out over the course of 14 to 15 episodes, with the Overlord returning as the main villain. After all, what’s a better way to celebrate a huge anniversary than bringing back the deadliest villain from the show’s earliest years?

Developing “Golden Hour” was a very special and rewarding experience. I had come home from a long shift at my job last summer and was checking my email before going to sleep when I saw the news that LEGO had decided to purchase and develop my idea. I was immediately floored, since I had been putting a lot more time and effort into my other original world, “Starjackers: Pirates in Space”. Although the plot of the short is quite different from my original world, I loved getting the chance to bring back fan-favorite villains and answer one of the biggest questions in Ninjago history; what happened to Master Wu during his battle with the Hands of Time?

Hearing that the LEGO Group liked my idea enough to create it as a short film alongside four other previously planned videos was a huge rush, and I got very excited about working with the Ninjago team and Tongal to bring my concept to life. I was nervous about my initial meeting with the LEGO team and I almost overslept and missed it. That wrinkle, coupled with getting to meet the co-creator of Ninjago, Tommy Andreasen, had me tongue-tied. However, everyone was quite nice and respectful despite my young age. I always felt like a valued member of the team, not just the person who had an idea and was now sitting back and watching everything happen. I was involved in outlining the script and picking the central moments revisited in the short, so I made sure to sneak my favorite moments from the first two seasons – lookout for a shot of my favorite episode in the end montage, and try to guess which one it is!

One clear example of my everlasting love for Ninjago is my YouTube channel, GoldenNinja3000. I picked the name back in 2012, after Lloyd became the Ultimate Spinjitzu Master in what I thought was the series finale of my favorite TV show. The name stuck throughout the rest of the decade despite my distance from Ninjago at certain points in time, but I’m glad I never changed it – especially because it ended up being so relevant to the “golden” theme of Ninjago’s 10-year anniversary!

I loved being part of the production team because movies are my biggest passion outside of LEGO, and this project came around at the same time I was starting to put more effort into my YouTube channel and increase my production quality. Getting to learn about the animation process was super interesting, especially because animation isn’t a field I’ve explored before. I got to sit in on the voice recording sessions, virtually meeting the stars of Ninjago, and I also got a peek at how the CC Pixels team approached animating new projects. Seeing every piece of the process in motion inspired me to submit pitches on the Tongal website for other LEGO World Builder projects, and I’ve even started writing my own Starjackers script just for fun.

Being the first fan Creator to go through the LEGO World Builder production process has been a ton of fun, and I’ve learned so much along the way. I never thought that I’d be this involved in the process as the architect, and I love that all the great people I’ve met were so eager to work with me to create this awesome short film. I can’t wait to see what other projects come out of LEGO World Builder, and I hope all the Ninjago fans out there enjoy this short film and find some satisfying answers to that Season 7 finale cliffhanger!

Are you the next LEGO Fan Creator? Hot off the heels of “Golden Hour”, the first original fan-made Ninjago short, the LEGO Group is ready to greenlight more original Ninjago-inspired worlds – this time focusing on the stories of secondary, lesser-known characters from the series. What kind of hijinks do Griffin Turner and Karlof get up to during the Tournament of Elements? How did Misako meet the children of the First Spinjitzu Master, and what were her fighting days like? Explore the history of these characters and more in your original worlds! For more information, visit the LEGO World Builder website. And to check out the LEGO Ninjago sets inspired by the LEGO Ninjago Legacy series, visit the LEGO Ninjago section of the Online LEGO Shop.

What do you think? How do you like this LEGO Ninjago spin-off? And what other Ninjago-inspired projects would you like to see? Are you planning to submit any ideas to LEGO World Builder, or do you have some ideas posted already? Feel free to share and discuss in the comment section below!