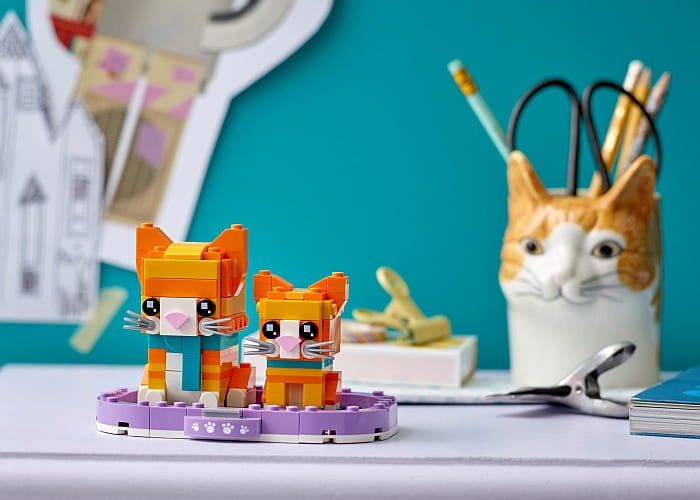 Thankfully, it looks like LEGO got us covered! Cat lovers can now look forward to the #40480 LEGO BrickHeadz Ginger Tabby, bird lovers are treated to the #40481 LEGO BrickHeadz Cockatiel, and fish lovers… are going to have to wait, because the third upcoming set is the #40482 LEGO BrickHeadz Hamster. This last set surprised me, but upon thinking about it, it made perfect sense. Variety is one of the strengths of the LEGO BrickHeadz Pets line, so adding a new pet to the mix feels like the right step. Now, let’s take a closer look at each of the new sets.

If you wanted a fairly common breed of cat, a ginger tabby is a great choice. Most of my friends who have or have had cats often had tabby cats of some color. This makes the pet lover crowd a fairly wide pool that would be charmed by this cute duo. 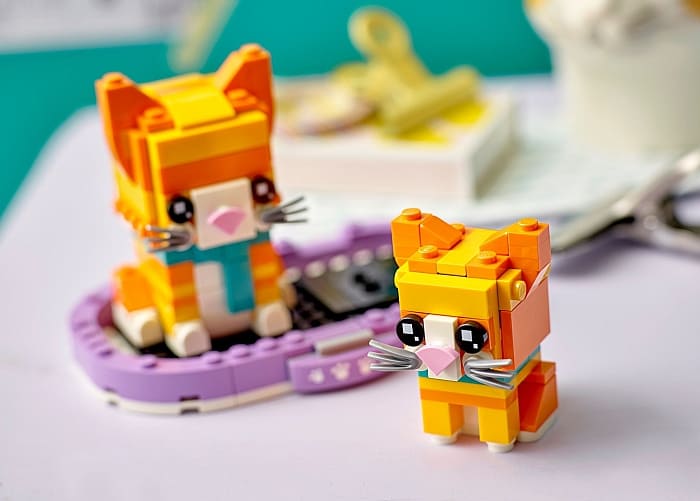 As far as building goes, there’s not too much to get excited about. Personally, one of the things I love about LEGO BrickHeadz is seeing similar shaped figures made in new and innovative ways. I can tell you right now that you won’t be picking up this set for that reason. Apart from the ears being a little more forward, the building techniques are very similar to the #40441 LEGO BrickHeadz Short Haired Cats. 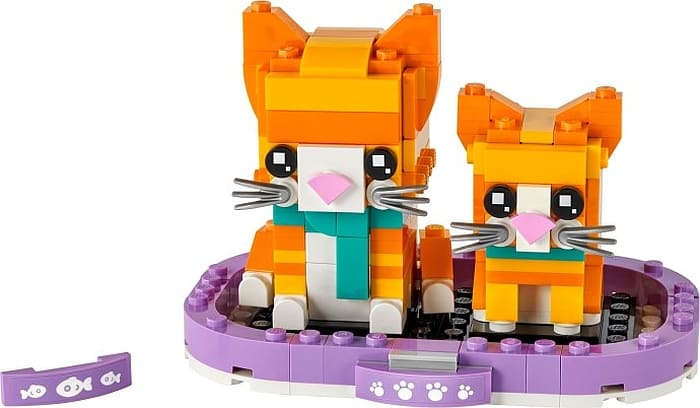 The colors of the pieces are an entirely different story. The two types of oranges are quite striking when paired together. As an added bonus, the bed and some internal pieces inside the cats are teal, which is still fairly uncommon. They even manage to include a few other parts in lavish colors to make up the inner structure of the cats. Like with all the LEGO BrickHeadz Pets sets, there are two stickers included with the set to decorate the curved slope on the bed. 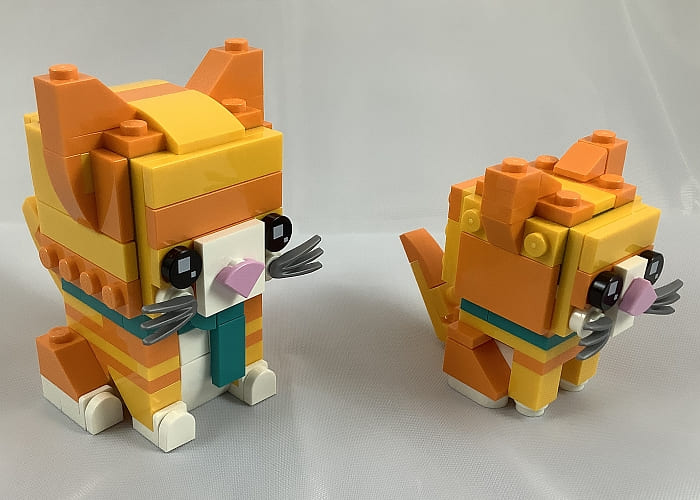 Overall, the cats are still interesting to build, especially if this is your first LEGO BrickHeadz Pets set. Though I expect people might pick up this set to make it easier to build other famous tabby cats like Garfield or Heathcliff. And if you have a ginger tabby, you’re going to want to get this set for sure. If for no other reason than to show it to your cat, it be not impressed, and then watch it knock it over. That to me is a cat video just begging to be made!

I am not a bird person, but the LEGO BrickHeadz birds are still my favorites to build. Even though this set is constructed similarly as the #40443 LEGO BrickHeadz Budgies, I felt engaged through the entire process. This has much to do with the design of the wings and tail feathers. 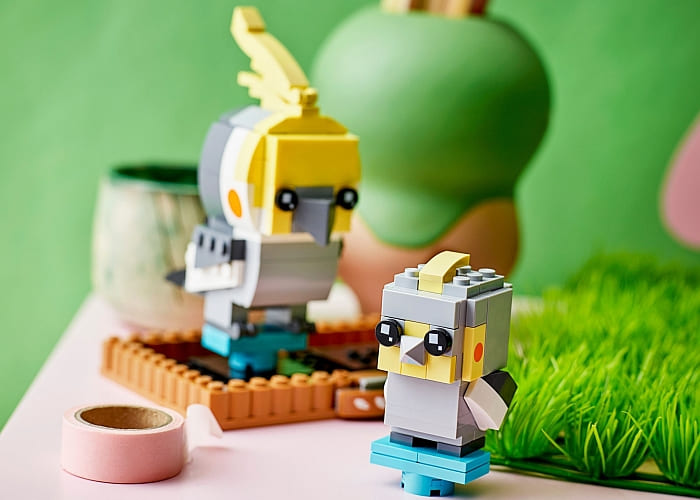 As an added bonus for builders, the cockatiel is mostly a gray bird. This means many of its parts are fairly neutral in color and can be repurposed quite easily. This set has some nice printed elements as well. The larger bird has two 2×2 curved slopes with spots on the side for the head. The chick has similar printed spots, but they are done on 1×2 tiles. 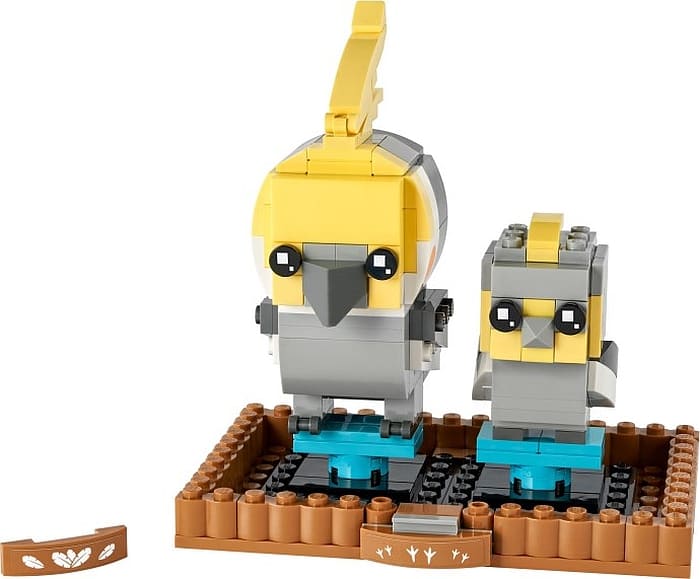 I should also mention that this set is not just for pet owners. Many people simply love to watch birds. This set is perfect to share their love of bird watching with younger generations. They can point out the distinct coloring while also presenting a fun little activity. I’m uncertain if this was LEGO’s intention, but the concept sounds interesting to me. 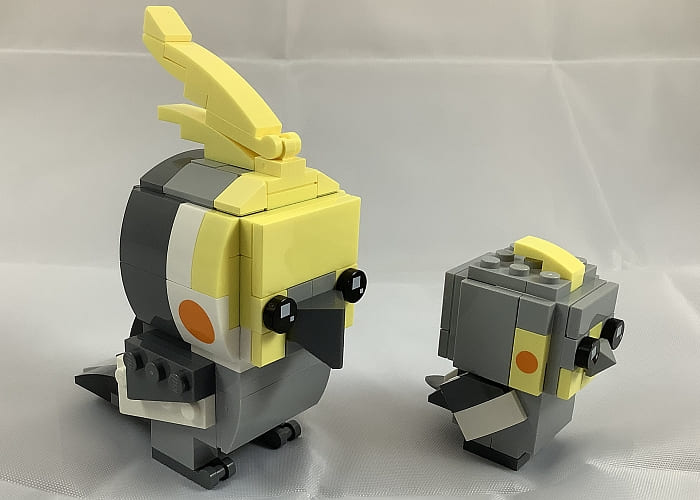 Since I am legally blind, sharing hobbies like bird watching is something far from what I can do. However, as I built the model, my wife told me what colors I was adding. This gave me a basis in what a cockatiel even looked like. And since birds aren’t really a pet you handle or cuddle up with, this is my type of speed to get more familiar with them. I’m also glad we’re getting a named breed of bird, it adds to the depth of the model.

As I mentioned, this set caught me by surprise. Given that the second wave of pets matched up with the first wave for the other three sets, I was expecting a new fish. With that said, this is an awesome departure. from the established pattern When I was younger, my brother had a hamster, and this LEGO BrickHeadz sets is pot on with the chubby cheeks and subtle shaping of the head. 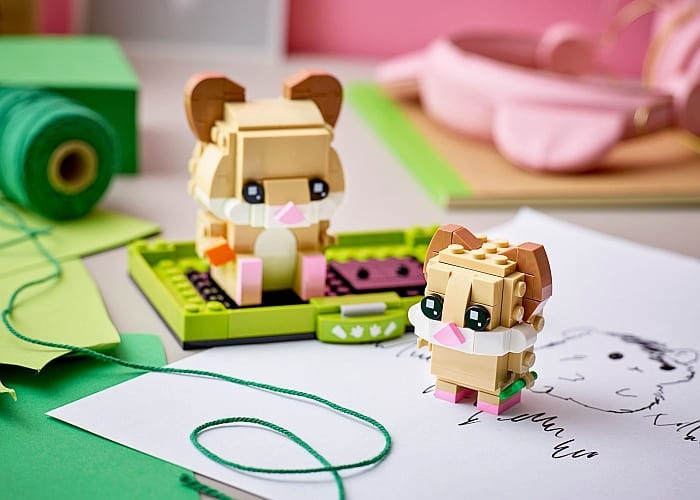 It is interesting to see that the adult and the baby hamsters are in two different poses. Nearly every time we see an adult and baby combo, they are in the same pose. The only exception I can think of is in the #40466 LEGO BrickHeadz Chinese New Year Pandas, where one of the babies is on its back. This different pose gives the baby a little extra character. 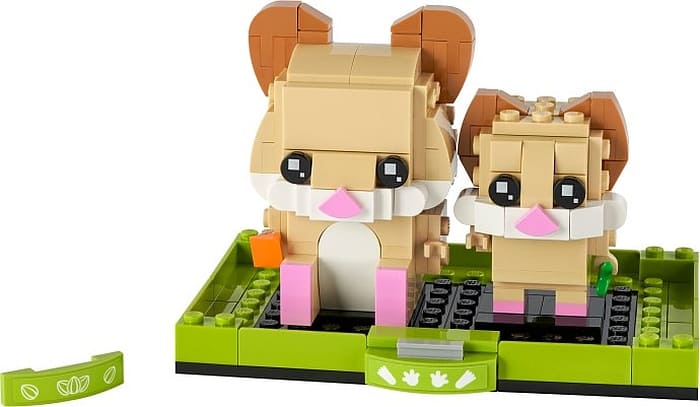 As for the build, the adult is placed in the same orientation as the adult panda, and also the #40436 LEGO BrickHeadz Lucky Cat. Considering the fact that most of the time hamsters are either climbing or running on all fours, there wasn’t another good pose for the BrickHeadz version that would still look like a BrickHeadz. I enjoyed building the round tummy. It’s been quite some time since we’ve seen a build like that. 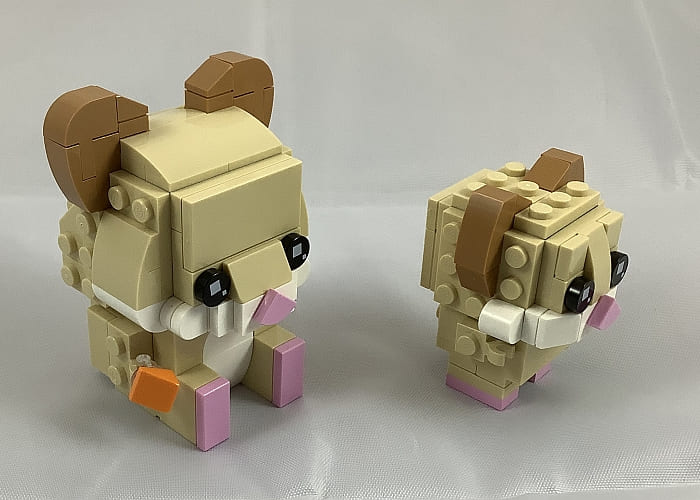 As for the baby hamster, it definitely stands on its own, and it a pretty interesting build. In order to get the ears just right, LEGO designers had to hollow out a good chunk of the head on each side to accommodate the parts used. I’ve seen something similar in larger LEGO BrickHeadz, so it was nice to see this technique used on a smaller character.

Parts wise, the tans are nice to have as are a few nougat-colored pieces. Plus, there are some very bright lime elements making up the stand. Here, we also get two stickers; one features a paw print and the other appears to be featuring food pellets.

Overall, this set does stand apart from the other pets sets, given the fact that it features a different type of creature. The build is entertaining, but I expect that this set will really only be a day one purchase for those with pet hamsters, and of course people who collect all the LEGO BrickHeadz they can (like myself).

I’m glad to see so many LEGO BrickHeadz Pets coming out in the first year of the collection. This gives people hope that eventually LEGO will get around to making their beloved pet. For this reason, I believe these sets are made in more limited batches for a niche audience. My worry is that if they don’t sell well then LEGO may pull the plug on the LEGO BrickHeadz Pets line all together.

Every LEGO BrickHeadz pet I’ve built so far is full of charm, but I believe that only a BrickHeadz fanatic like myself will strive to collect them all. Otherwise, people may only get the ones that are important to them. I’m hoping all the experience LEGO has had making LEGO BrickHeadz characters finds a way to continue these adorable sets since they do offer a different experience than the intellectual property characters. Personally, I think they will work as long as they also pack interesting parts along with each unique model. This way, builders wanting cool parts can help with making this line a success. In the video below, I discuss all three sets in a bit more detail.

What do you think? How do you like the LEGO BrickHeadz Pets collection? And what do you think of the latest additions? Feel free to share your thoughts and discuss in the comment section below!