Last week I showed you the large underwater and above water landscape I built from the recent waves of LEGO Ninjago sets (see: LEGO Ninjago The Island & Seabound Sets Combo), and I promised that we would take a closer look at the techniques I used to create it! 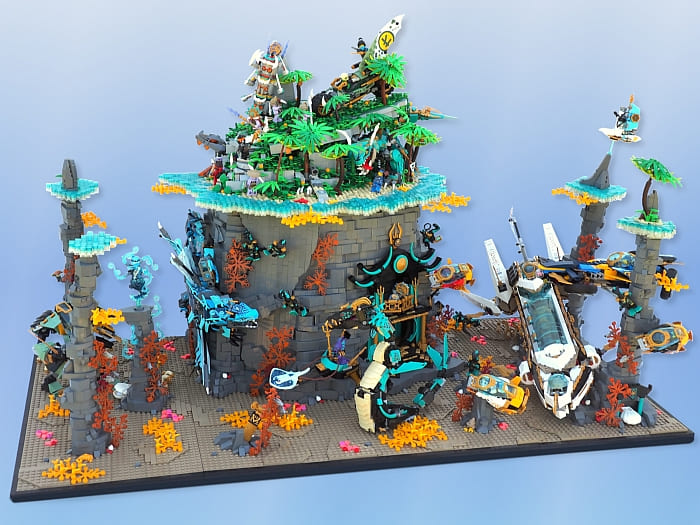 We’ll start with the biggest part of this creation: the massive rock wall.  Sideways rock is my go-to technique for tall cliffs because you’ll often see horizontal lines in natural rock formations.  You can also get a lot of mileage out of ordinary dark-grey bricks with this kind of technique, instead of having to rely on slopes.  Besides bricks and slopes, I used a bunch of large dark grey rock panels turned sideways. 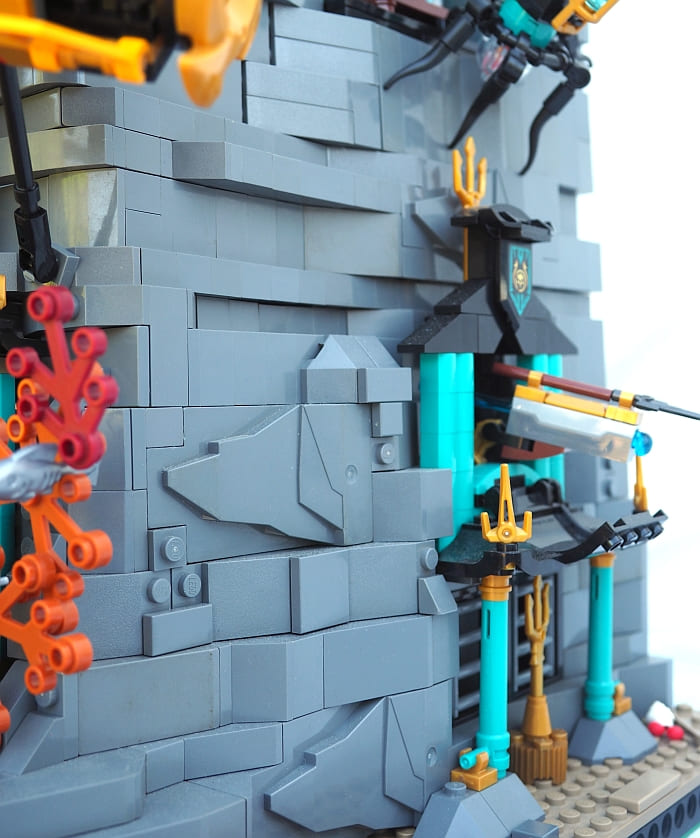 Lately, I’ve been using a “slinky rock” technique originally developed by Eli Wilsea.  My version uses LEGO Technic axles running through bricks with LEGO Technic pin holes in them.  I alternate between layers of various thicknesses.  This technique can be very sturdy, but I didn’t want to waste dark-grey bricks, so most of my layers aren’t attached by more than a couple studs.  (If you’d like to know why they’re called “slinky rocks”—you’ll see in the video below!) 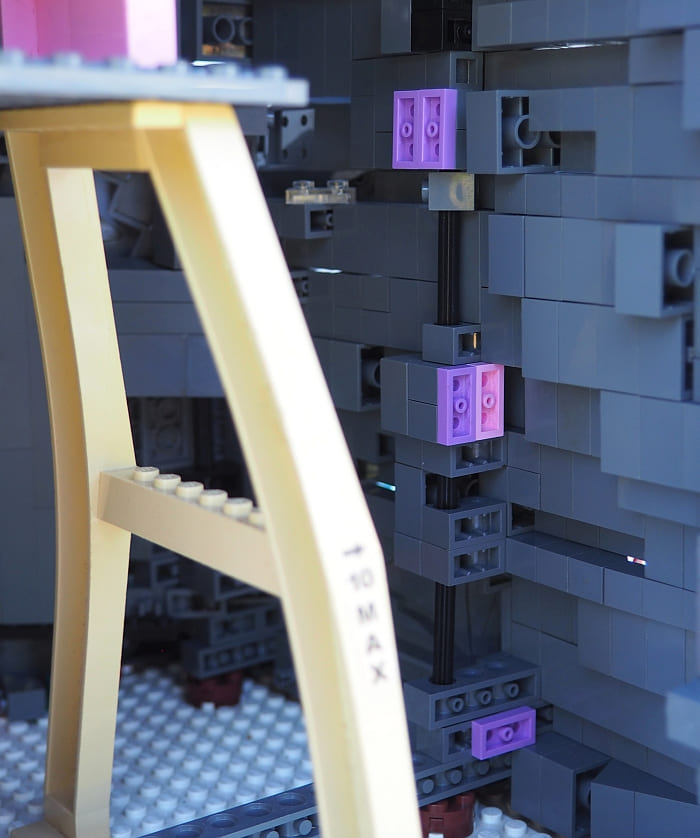 You can get a closer look at the way these rocks are built here inside the pillars.  I used some 1×2 bricks with two holes and some with only one hole in the center, allowing for half-stud offsets between layers.  Also, most of the layers rotate freely. 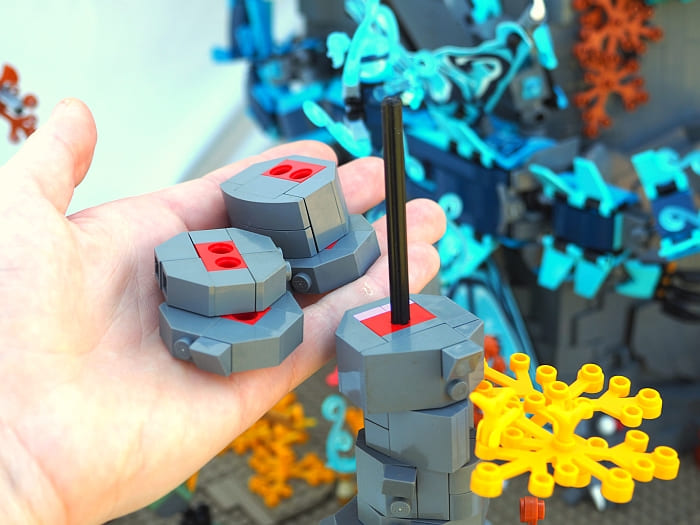 The top layer is extra thick, so I can end with a completely dark-grey top that covers over my axle nicely. 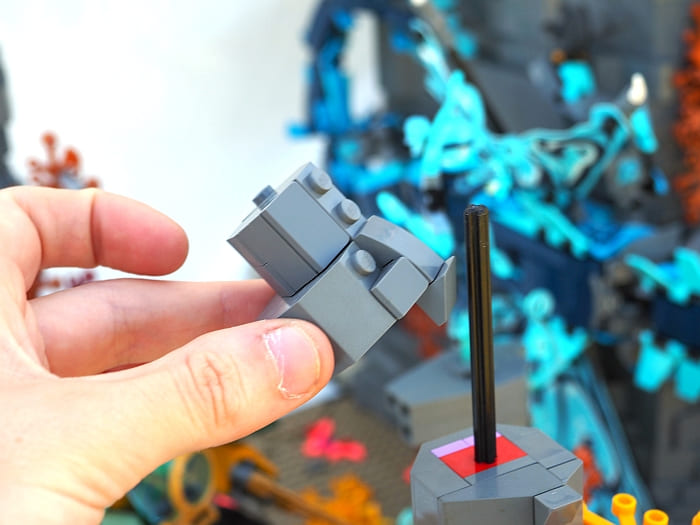 Although I relied on this technique for most of the rockwork in this build, I do have one long slab of bricks around the corner.  I did this mostly to get more out of my longest dark-grey pieces! 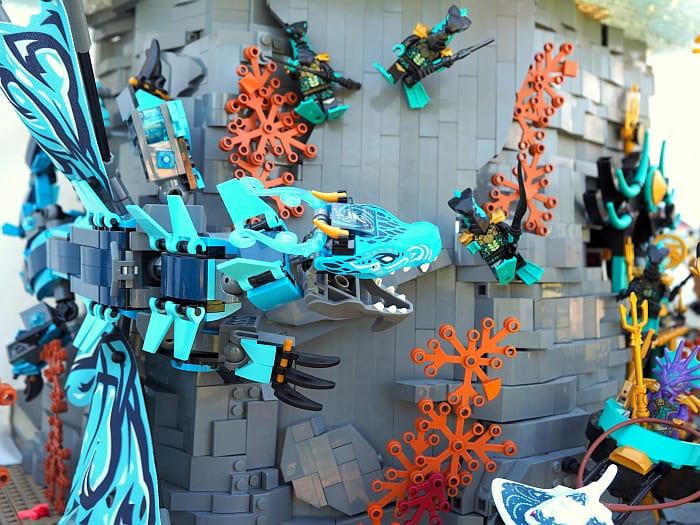 Now that we’ve seen how the rocks were built, let’s see how I used them to support the dragon and submarines.  The #71754 LEGO Ninjago Water Dragon is attached to the cliff face by four studs.  I didn’t think this would be enough but turns out the dragon really isn’t that heavy.  So since there was no need for me to tear it halfway apart in order to embed a LEGO Technic axle inside it, I didn’t bother.  Four studs did the trick instead. 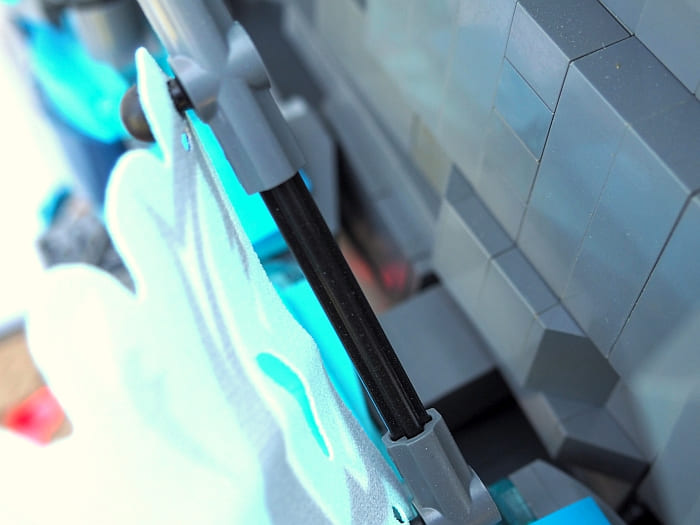 The support system for #71752 LEGO Ninjago Ninja Sub Speeder is more elaborate.  I attached light-grey axles between two pillars of rocks in order to give it a resting spot.  The submarine puts plenty of pressure on the axles, but they handle it well and bend without breaking. 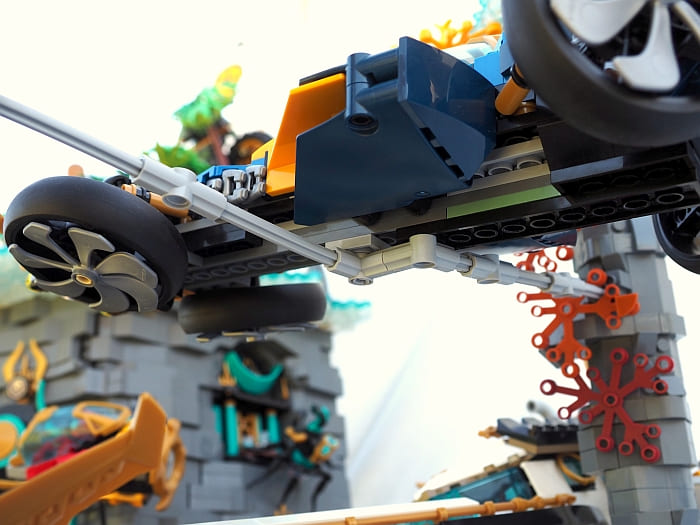 The #71756 LEGO Ninjago Hydro Bounty is right underneath Jay’s submarine.  For the most part, it just rests on the ground, but I did attach a few bricks to its base and left a hole in the rock for them to fit into.  It’s not attached, but this arrangement keeps the Bounty from sliding out of position. 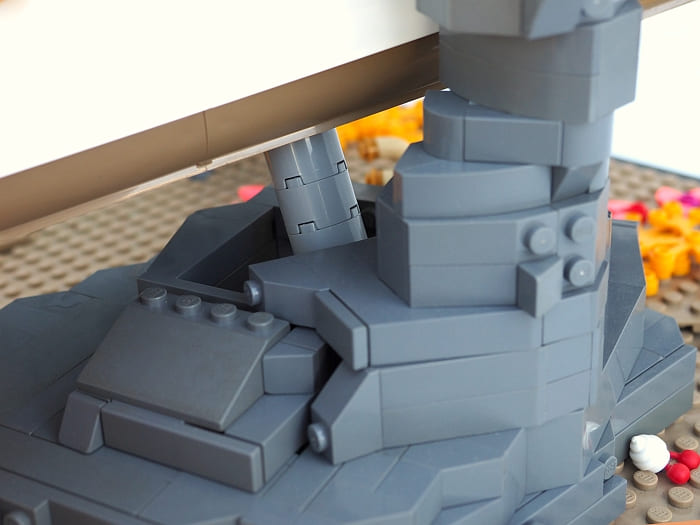 The smaller submarines are attached to the rock using a few bar and clip connections. 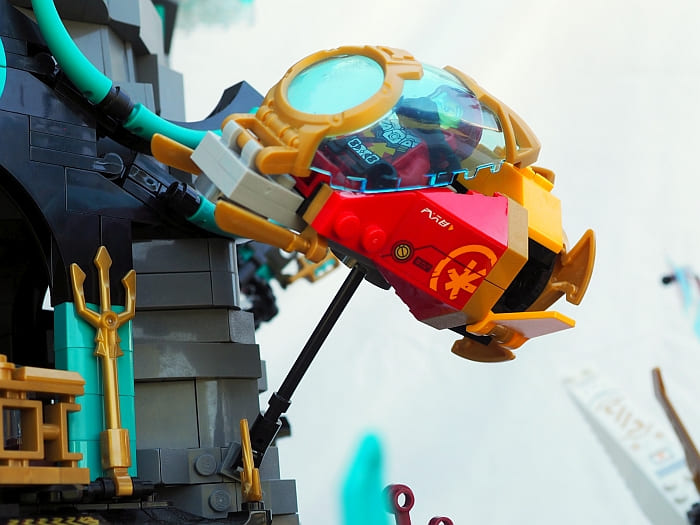 We’ve already caught a glimpse of what the inside of my giant rock looks like, but here’s a complete view where you can see just how hollow it really is.  In fact, for the size of this creation, it’s unusually light.  I trusted the rock walls themselves to provide most of the support for the island layer and only built the bare minimum for internal support. 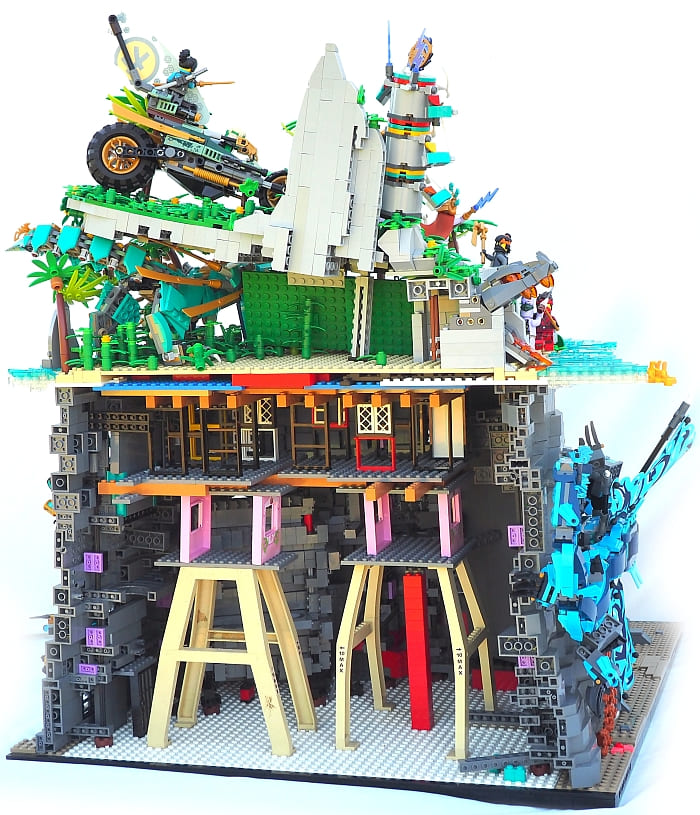 The next technique to talk about is the water.  There are four layers in my water—two layers of trans-clear 1×2 plates, a layer of 1×1 round trans-light-blue dots, and finally a layer of trans-light-blue 1×2 tiles.  I definitely ran out of pieces building this water; I had hoped my collection would hold out for a couple more inches of water all the way around the island, but there was no way! 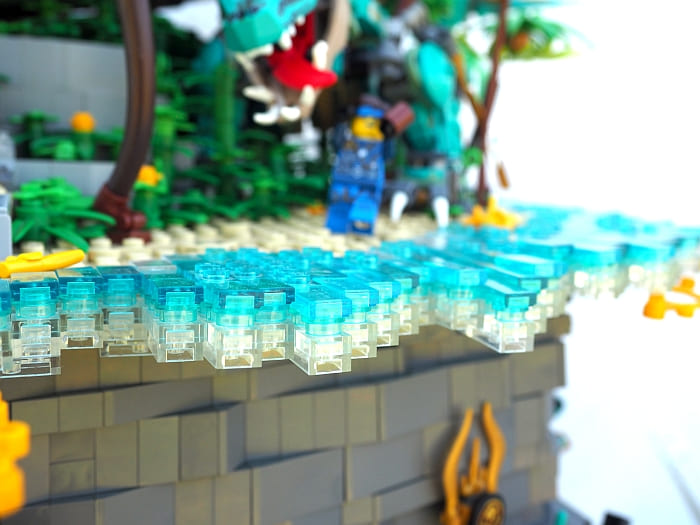 Lastly, there are two things to point out about the coral and seaweed.  First of all, I got some great advice from another builder, who suggested I try warm red and yellow colors, in order to make sure my seaweed wouldn’t camouflage the sets.  That worked great and helped keep the above and underwater visually distinct too.

Secondly, a good tip when you’re building coral or really any kind of plant; find a few pieces you have a lot of and see if you can combine them in a plant-like way.  In this case, I used flowers and quarter tiles, elephant tusks and gold round plates, and twigs and minifigure hands.  But I’m hardly exaggerating at all when I say that a few dozen of any LEGO piece makes good coral.  It’s especially good if you can combine two or more similar pieces for an assembly and then repeat that many times. 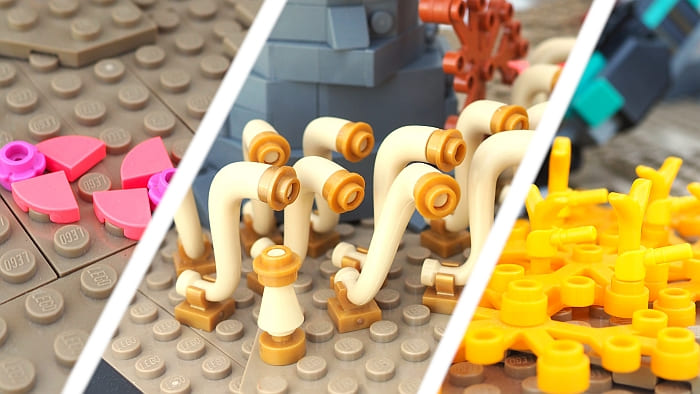 If you’d like to see some of these techniques in more depth, I put together a short video to explain more!

Building a habitat for these Ninjago sets was a lot of fun and I was able to flesh out some techniques that I’d only dabbled in before, like the slinky rocks and the seaweed!  But I think the best part was planning the colors in order to make the whole creation as eye-catching as possible. 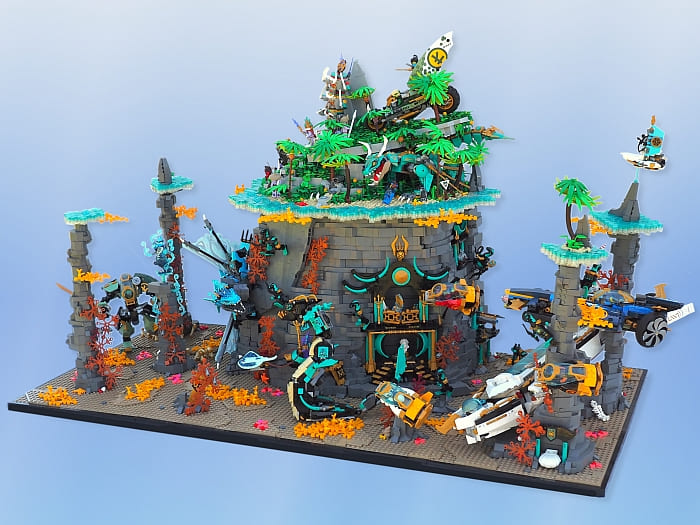 What do you think?  Are any of my techniques here new to you?  What would you have done differently if you’d been building a habitat for these sets?  Is there any technique you wanted to know about that I didn’t explain?  Feel free to share your thoughts or ask questions in the comment section below!