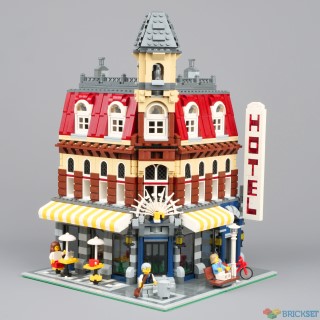 Today sees the release of the latest modular building, 10297 Boutique Hotel, so I thought it would be a good opportunity to look back at the first, 10182 Cafe Corner, which was launched in April 2007.

What started as a ‘nights and weekend passion project’ [1] for designer Jamie Berard 15 years ago set the standard for what has subsequently become the popular series of sets now known as the modular buildings collection.

Because many people started collecting them after this first one retired in 2009 it’s become highly desirable to completests and thus incredibly expensive on the secondary market, commanding prices upwards of $2000 for a new example on BrickLink. Even if you’re thinking of buying the parts individually you’ll be in for a shock at the price of some of them.

How does it compare to more recent building in the series, and is it worth forking out a fortune for? And, how does it look next to 10297 Boutique Hotel?

Prior to the release of 10182 Café Corner, sets aimed at adults were either Star Wars or large-scale sculptures. This was the first minifig-scale one that was similar to the sort of MOCs AFOLs were building at the time for their train or city layouts, which should come as no surprise given that Jamie was an active AFOL doing just that before landing the coveted designer job.

It was like nothing that had gone before: civilian buildings were virtually non-existent in the City lineup, so it was something for which there was pent-up demand among discerning AFOLs.

However, partly because LEGO had not produced a model like it before, there was a lack of suitable pieces available, particularly windows and doors, which led to compromises that only really become apparent when you look back at it now.

The three-storey building is part café, part hotel, although there are no interior details or walls to delineate them.

The building has a definite continental European vibe to it and each floor utilises parts-intensive building techniques for their facades, the likes of which we had not seen before. The 45-degree corner of the building and brick-built lettering on the sign were also novelties in official sets at the time.

There’s plenty of nice parts usage (NPU) evident, such as frogs, parrots and skis used for architectural details, and vehicle wheel arches above the windows, so not only did the model set the physical standards for the modular building series, it also set the bar for details and techniques.

The interior is largely empty, although there is a flight of stairs leading from the door on the side to the higher floors.

Two of the doors on the ground floor are the old-style five-high ones, one of which, it turned out, made its last appearance in this set, years after it had been out of use elsewhere. Consequently, they are among the most expensive pieces to source, with the black one on the corner costing about $10 and the grey one on the side around $30!

The windows on the first floor are the part of the model I like the least. They are formed using the old-style 1x2x3 panels without strengthening on the sides, which will set you back around $40 for 20 used ones, if you can find a seller with that many in stock. However, they’ve only been used because there was nothing else more suitable available at the time. The current style of 1x2x3 windows, introduced in 2009, would look much better and of course they can be glazed.

It’s a similar story in on the second floor: the windows used are thick chunky juniorised ones because, again, the1x4x3 version we are accustomed to now was not available at the time.

I’ve had the set bagged up in storage for at least 10 years, so I was relieved to find that none of the white parts have yellowed when I rebuilt it over Christmas. I don’t know whether the brown bricks have faded or whether they were different shades when new, which would not surprise me.

What did surprise, though, was how many pieces we now take for granted were not available in 2007, in particular 2×2 corner and 1×3 tiles.

One thing that’s evident when looking at the featureless back: the lack of interior details has resulted a more uniform exterior than many of the more recent modulars.

The first buildings in the series made a point of using the classic smiley head for the minifigures but compared to today’s finely printed and expressive figures the three included with this set look plain and boring. I have no idea why, but two of them cost around £10 each on BrickLink!

There’s no doubt that 10182 Cafe Corner is a classic set and rightly sought-after, although I don’t think I’d pay the price it commands now for it, given you could buy ten currently available ones for the same money. If I were to source the pieces to built it I’d replace the windows and doors with their modern equivalents.

I think the first modular can easily hold its own when compared to the latest. Of course the newest one is dripping with details and interesting colours, but given what was available at the time back in 2007, Jamie did a very commendable job.

The two buildings don’t really work side-by-side in the arrangement below, though: the hotel sign is obscured by the art gallery and palm tree above it.

It’s slightly better this way round, but the older building is set back further from the edge of the pavement than the new one which leaves a lot of the latter’s rather unsightly side wall exposed.

I don’t often have the inclination or the time to rebuild old sets, but I did enjoy constructing this one again: it highlighted how far the hobby has come in 15 years but also how revolutionary it was when released. No doubt some of you reading this will prefer this set to more recent ones, but not me.

If Jamie had not burned the midnight oil designing this one and persuading the powers that be that it would be a good idea to release it, we might not have had the fan-favourite modular buildings collection at all…