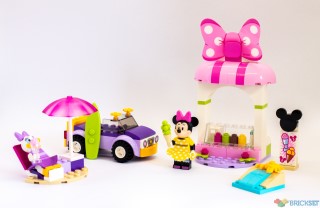 The new Mickey and Friends subtheme aimed at preschoolers aged 4+ contains five sets of various sizes, each featuring either Mickey or Minnie, along with their friends (the clue is in the name!) 10773 Minnie Mouse’s Ice Cream Shop is the middle of the five, with exactly 100 parts.

As with the other two sets in the theme I was provided to review, I handed this off to my daughter (who is just over five) to build and return to me for photographing—she hasn’t quite mastered the use of my photography set-up yet! Any mistakes in the photography is all me; the excellent build quality is entirely down to her…

Two unique minifigures are included with the set—Minnie Mouse and her friend, Daisy Duck. Minnie’s wearing her iconic polka dot dress, although in yellow rather than red, and her ever-present bow is pink. Surprisingly, Minnie’s head has never appeared in a set this small before beyond the original CMF: previously, your only options were either the two large D2C models (71044 Disney Train and Station and 71040 Disney Castle,) or in black and white with the Ideas 21317 Steamboat WIllie or second Disney CMF.

The yellow dress is brand new, and looks fantastic, with excellent detail of a waistband and neckline that continues onto the back. The choice of dual-moulded arms to give the dress sleeves was the correct one, in my opinion—yellow print on black wouldn’t have been able to achieve the same vivid colour.

The white-on-yellow polka dots continue onto the skirt, which is only the second appearance of this circular cut of fabric (the first was red with white polka dots in 71044.) The design is a big improvement over the previous fabric dress pieces that required folding, although it does tend to stick straight out on all sides when not pinned down by an arm or two. Daisy also makes use of this part, but in Medium Lavender instead.

Speaking of which, Daisy’s head is similarly rare, and her torso is also unique, with a print of a white strip across a lavender v-neck dress that likewise continues onto the rear.

Daisy’s legs are dual-moulded in white and flame orange, which has been used previously for other ducks in the Disney universe. Minnie’s, however, are unique to the set, with her white bloomers printed onto the front of a pair of black legs, and pink shoes also indicated by printing.

Minnie’s titular Ice Cream Shop is the first thing to be built, along with a display stand showing the menu. It’s very clear that this is a Disney set, and whose ice cream stand it is! Not only are the prices of the ice creams highlighted with the classic Mickey Mouse silhouette, but the menu is topped with the new black double-thickness tile in the same shape, and the stand itself sports an enormous Minnie Mouse bow on top! This made of stiff-but-flexible plastic, and held in place using the new part developed for the Dots photo frames, new in bright purple.

At the base of the stand, four different flavours of ice cream are available, along with some cherries stored in a cupboard, and a till. Minnie’s supplied holding a cone, and Daisy a sundae glass, but beyond those, there’s no way to actually serve the ice creams.

The ice cream shop may be Minnie’s, but the rest of the set belongs to Daisy, on a trip to the beach. There’s a small sun lounger underneath a parasol for her to relax upon (ice cream in hand,) and a tiny patch of shore where blue waves lap against the sand. Oh, and there’s also a crab!

The majority of the parts beyond the shop, however, make up Daisy’s car. In keeping with the character, it is predominantly purple, with yellow/orange highlights. A surfboard is attached to the back, and flowers adorn the windscreen. The headlights and radiator grill are printed: a design unique to this set, with a flower on the grill matching those on the roof.

As this is a set designed for preschoolers, the chassis is a single piece, and my daughter had no trouble putting it together. There’s room inside for Daisy to sit, and the classic steering wheel and windscreen. With the chunky tyres, it looks like a perfect little off-road buggy for a trip to the beach.

100 parts doesn’t sound like much, but when put altogether, it’s a fun and colourful scene with plenty going on. As you’d expect from the Disney licence, the two minifigures are excellent quality, and it’s great to see Minnie available in her iconic design in a more accessible set than before.

As to the suitability to the age range, my five-year-old daughter had no trouble building the set entirely unaided, and in a single sitting; with many of the other sets aimed at 5 and up, she finds the instructions slightly daunting and the length of time they can take to build off-putting. The new instruction design in this 4+ subtheme has helped significantly, as mentioned in my review of 10772 Mickey Mouse’s Propeller Plane.