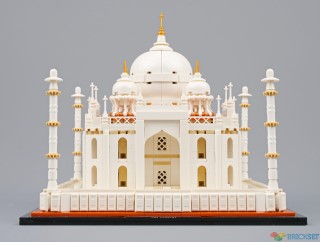 The Taj Mahal is one of the seven wonders of the modern world and this is the second LEGO version of the mausoleum, the first being the 6,000-piece 10189 released during 2008.

The new Architecture version, 21056 Taj Mahal, has around 1/3rd the number of pieces and will be available from June 1st in Europe/ROW and August 1st in the USA and Canada.

The building is on the southern bank of the river Yamuna in the Indian city of Agra. It was commissioned in 1632 by Mughal emperor Shah Jahan to house the tomb of his favourite wife Mumtaz Mahal, and now also houses his as well.

This is the view that greets you when you visit the site and as you can see the four minarets (towers in the corners) are an important and prominent feature of the structure. Although they are not as tall as the central dome, they look to be a similar height from this angle. More on that later…

The building is constructed on a sturdy 30×30 base which, like all Architecture sets, has a black tile border and printed tile.

It’s raised by a brick to form the marble base upon which the building sits. The central section houses the tombs of the emperor and his wife, represented here by two white 1×2 ingots.

The next stage of construction involves placing around 200 white and tan 1×1 tiles onto 2×3 plates. It takes time and patience to ensure they are all positioned squarely, around half and hour or so, and I was glad when I’d finished!

With the base out the way, we can begin on the main part of the building, the mausoleum. It’s built in eight subassemblies: four corners and four side sections, which thus involves some repetitious building. The corner sections incorporate some interesting building techniques to form the 45-degree angle.

The eight subassemblies are attached to the base to create the uneven octagonal shaped building.

A removable dome section is added to the centre before finishing off the edges of the roof with 1-high fence pieces.

The building’s main onion-shaped dome is cleverly constructed using a variety of SNOT techniques which I will leave for you to discover for yourself.

The central section of the roof rests on tiles which allows it to be removed to access the interior.

Four smaller domes are placed at the corners of the main one and the absence of any suitable arches to form the lower part of them has necessitated the use of droid arms to approximate their shape. It’s not entirely successful, in my opinion, but a clever solution nonetheless. It’s actually quite hard to build them because all the arms need to be lined up with the top ring before clipping any of them onto it.

The last parts to be added are the four minarets in the corners. They are constructed using 1×1 round bricks at the bottom with Technic axle connectors above.

Unfortunately, as you can see, they are far too thin compared to the size of the main mausoleum. The real building is 56m square and the minarets have a diameter of exactly 1/10th of that. The model is 18 studs square, so the towers should be 1.8 studs diameter, not just one.

If you refer back to the aerial picture of the real building above, you’ll also notice that the base of the model is too small. The real one is 95m square so, with the 56m square building in the centre, there’s a 20m gap all around it. The model’s building is 18 studs wide, so each stud represents about 3m of the real building. Therefore, there should be at least 6 studs around it, not 3.

The main part of the structure, however, looks excellent: packed with realistic details, interesting parts usage and building techniques and, while it probably isn’t 100% proportionally accurate, it looks to be.

The minarets are totally inadequate and therefore spoil what otherwise would be an excellent model. In fact, when I first glanced at the picture on the front of the box, I thought they’d been omitted, they are so puny.

The view from this angle really highlights how bad they look compared to the actual site.

As I mentioned above, the roof lifts off, as does the dome in the middle, to reveal the tombs in the centre.

I can’t really understand why the minarets are so thin when, surely the solution is to use 2×2 round bricks? So, to see what they look like, that’s what I’ve done here.

They perhaps look a little crude and bulky, and some tapering at the top would be welcome, but in my opinion they are more to scale with the building than the 1-wide ones.

They would look better and more in proportion had the base been enlarged as well so that those at the front are further away from the building which, from this angle, would then also give the impression that they are similar in height to the main dome, as in the picture of the real building. That would require a total rebuild, and probably two copies of the set unless you can muster enough 1×1 tiles and the white 1×2 ingots to use around the edges.

The shrunken base and puny minarets spoil what would otherwise be an excellent model. I appreciate that selective compression is a useful technique to reduce a model’s dimensions to keep the size and cost manageable, but in this case it has ruined it completely.

So, as it is, unless you’re prepared to heavily modify it to correct the proportions, or can live with the inaccuracies, I really can’t recommend it. It’s a shame, because the main mausoleum section is on the whole pretty much perfect.