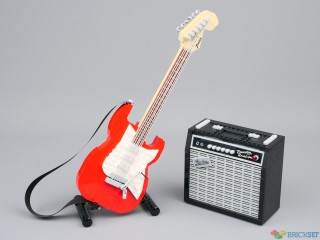 21329 Fender Stratocaster is based on Tomoell’s entry to the LEGO Ideas Music to our ears competition held last year.

The distinctively-shaped electric guitar was first manufactured in California during 1954 and has since become the instrument of choice for rock guitarists the world over, including Eric Clapton, George Harrison, Jimi Hendrix, Buddy Holly and Hank Marvin.

The 1,074-piece set is released on October 1st and will be priced at $99 /£89 / €99. In addition to the instrument, it also contains a 1960s Fender guitar amplifier, which might look like a boring square black box, but is actually so much more…

Parts are packaged in numbered bags, with those in 1-8 providing the pieces for the guitar. The body of the instrument can be built in either black or red, so two of the bags don’t need to be opened once you’ve made your choice.

Bags 9-12 contain parts for the amplifier.

In addition to the actual instructions, the 173-page manual contains background information about Fender, the guitar, the designers and fan designer Tomoell.

There are two small sticker sheets. The one on the top sheet is designed to be stuck on your actual guitar rather than the model. Three of the others are for the amplifier. Most of the decorated elements on the guitar are printed.

There are quite a few interesting elements in the set, including the aforementioned printed pieces that you’ll see later in the review, and this 40cm long guitar strap which is made from a similar material to minifigs capes.

I’ve not come across the 1×2 curved slope before: a 1×3 version was introduced earlier in the year. Again, it comes in red and black.

Finally, the strings are new: The six of them have a single element ID: 6371713. They are light grey, about 30cm long, and are terminated in 1×1 round studs, as per the shorter black ones.

Before commencing on the guitar a folding stand for it is built which looks pretty much identical to that in the original Ideas submission.

The core of the guitar is the same whether you choose to build the red or the black variant. All the decorated elements are printed: three 1×3 white tiles with pickup pattern, four different 2xn brown tiles for the fretboard, and a tan slope printed with the manufacturer’s logo for the headstock.

At this point of the build you will need to decide if you’re opting for red or black. I think most will choose red given it contrasts with the black amplifier.

Adding the strings is the most difficult and time-consuming part of the build. It’s simplified by applying coloured 1×1 tiles to the ends temporarily to identify each string but even so it takes some fiddling about to get them crossing the bridge in the right order and tensioned correctly, which is done much as it is on a real guitar: by turning the ‘tuning pegs’ (1×1 ends of the string) slightly.

The body is completed using a variety of SNOT techniques and various curved pieces: the end result looks accurate and excellent. Overall the guitar is about 35cm long and 11cm wide.

There’s a nameplate on the back, which is a sticker, and a pair of white 4×4 plates with reduced studs that hide the innards where the strings are attached. The tuning pegs on the back of the headstock are non-functioning.

A cable jack, knobs for volume and tone control, and a tremolo ‘whammy bar’ are all present and correct. I think the black lever is supposed to represent the slot of the pickup selector which on the real instrument is a sliding knob.

The red version looks great, and I have no intention of taking it apart at the moment, so please make do with the official picture of the black version:

Here are the parts you’ll have spare if you do the same:

There’s no indication on the box or official set images just how complex and interesting the amplifier, which is based on a 1960s Fender Princeton reverb, is.

Other than a row of controls and sockets at the top there’s not much to see at the front, and you could be forgiven for thinking there’s not a lot to it, but it’s a different matter round the back.

Just like the real thing the back is open exposing the rear the speaker cone and cabling at the bottom, and power switch and sockets at the top.

The top of the cabinet can be removed to reveal a circuit board: to my knowledge this is the first time such a thing has been modelled in an official set. The components — resistors, capacitors and so on — are represented by various 1×1 pieces in a variety of colours and the end result looks quite convincing.

The unit pre-dates the widespread use of transistors so utilised thermionic valves for amplification. These hang down underneath the circuitry on the left. One has a red lipstick core to represent the glowing cathode. The four silver pieces hanging down on the right represent large electrolytic capacitors.

The sticker at the top reads 04062020 which presumably is a date of some significance to someone.

Finally, a small pedal unit is constructed that is ‘plugged in’ to the amp using a long piece of pneumatic tube. A second piece is provided to plug the guitar into the amp as well. Both use lipstick pieces as plugs which fit into the holes in the middle of Technic pins.

The guitar is excellent, and a miniature masterpiece of SNOT techniques. I wasn’t expecting much from the amp, but its internals surprised and delighted me. A lot of effort went into creating realistic-looking circuitry and electronic components, so it’s perhaps a shame that most of the time they’ll be hidden away.

The set is certain to delight guitar players, in particular Stratocaster owners, or aspiring owners, but I suspect some will question whether including the amp and additional black pieces for the guitar was the right decision.

It seems like the design team were told ‘make a $100 set’ rather than ‘make a model of a guitar’ so what could have been an equally good display model of just the instrument for, say, $40, has been inflated by $10 for the extra black pieces and $50 for the amplifier. If you were hoping for something more affordable, you may therefore be disappointed.

Having said that, the amp does look great inside and out and complements the guitar perfectly, so perhaps it was the right decision after all.