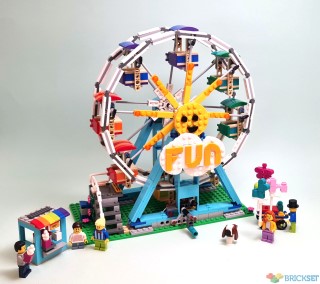 I’m very pleased to have been asked by Huw to review the new Creator 3in1 Ferris Wheel set 31119 Ferris Wheel, and I will be doing so with help from my 7-year-old stepson.

LEGO has a history of taking inspiration from larger ‘Creator Expert’ sets for some of the Creator range, and this new Ferris Wheel certainly seems to bear some similarity to 10247 Ferris Wheel from 2015, with Medium Azure supports and Yellow spokes on the wheel itself.

I bought 10247 Ferris Wheel back in the day, and it was a very popular set at the time. So, can this Creator version match it?

One advantage of the Creator 3in1 line is that you don’t just get instructions for the main build, but also for two other smaller builds. In an effort to be thorough, I’ve built them all so that you can decide if you want to or not.

As I anticipated that my young helper would want to keep the main Ferris wheel built, I started with the smallest build.

I suspect that the nature of the main build – with specific parts making up the spokes – will have made it harder to come up with alternative builds, but a swinging boats ride is a good choice, and works quite well with the parts that are available.

The build took about an hour to finish, which isn’t too bad considering I had to open all the bags! We start with the minifigures and a couple of small mini builds.

The minifigures are pretty generic, with plain legs in common colours. I’m not an expert on minifigure torsos, but it looks like the blue and white striped torso with bow tie has only previously appeared in 60253 Ice-Cream Truck. There’s two supplied here. Four of the minifigure heads are double-sided.

Something which is consistent with Creator sets is that any animals are always brick-built, and I think the representation of a dog in the small build is quite a good one – certainly better than in the later bumper car build!

The mini builds are a fairly basic gumball machine, and a very nice little toy grabber machine of the kind you find at fairgrounds which so frustrates little children. There’s a rather obvious issue with this one though, because there’s no glass in it! I think this can be slightly forgiven, as the designer has been restricted to using parts from the main build.

Halfway through the build, and we’ve built the main structure, which has a rather nice representation of a sailing ship above the canopy. There’s also stop and go buttons, an entrance gate, and it’s clear where the boats will clip onto when built.

While finishing the build, the problem of having a limited number of parts for the designer to use is also clear. It’s quite clear that compromises have been made throughout the build because of the restriction on parts. This impacts slightly on the only play feature, in that the boats have a limited (although still quite decent) swinging range.

That said, the model is a good representation of a swinging boat ride, even if it’s far from perfect, and it’s nice and easy to move the boats by rocking the exposed tops of the supports with your fingers.

From the back we can also see what looks like a motor to drive the boats, which is the last thing to be built.

In terms of play value, my helper wasn’t around for this one, but I suspect that playability is quite limited given that all you can do is swing the boats back and forth. In addition, the minifigures sit on tiles, so aren’t very stable inside the boats. Overall, it’s a nice little addition to a fairground, but with limited playability it’s hardly the main attraction.

There were a lot of parts left over from this build – far more than I expected when I started it. I did think myself lucky that I started with the smallest build, because if I’d started with the main build, I’d have had to take a lot more apart in order to build the next one…

Once I’d taken the swinging boats apart, I started on the next build, the dodgems / bumper cars.

I thought this might be the ‘medium’ build, as it has about 40 steps more than the swinging boats, but it took about the same amount of time to build, and I reckon it uses a similar number of pieces.

The minifigures get their body parts rearranged for this build, and we get to build a slightly different dog. Unfortunately, this one looks like it has smoke coming out of its ears!

Getting halfway through and we’ve built most of the ride façade, along with a little ticket booth, which has a door at the back that folds down to form a ramp.

Next, we build the lettering, the side canopies, and the barrier enclosing the ride. This has click-hinges attached to clips, so it doesn’t stay rigid if you lift it up to move it, but it does easily allow you to lift the barrier up out of the way.

Finally, we build the four bumper cars themselves. Have you spotted the major inaccuracy with the build?

A real bumper car ride has the pole extending to an electrical grid in the roof, through which it gets the electrical power to drive. This representation has the poles but no roof, leaving us with the question of how they get power!

I suspect this is quibbling though, as the designer won’t have had the parts to create a roof, and including one would have blocked being able to play with the cars. My stepson certainly didn’t notice this inaccuracy, so I think the designer can be forgiven!

There is a bigger issue with the build though, which became obvious when my stepson started playing with it – the enclosed area is simply too small to be able to play with the cars in. Indeed, after just a few moments of playing, he decided to ignore the barrier altogether and make the whole of the floor rug the arena! He also decided to use the poles as handles to hold them, and soon we had flying dodgems and jet-boosted dodgems…

It’s obvious that this build, with the non-fixed nature of the bumper cars, offers far more play value than the swinging boats would have done. In a way it’s a shame that this build has been relegated to second-build status here, with the compromises that entails, as I think a larger stand-alone bumper car ride set could have been even better play value.

That said, I’m quite impressed with what’s been managed with the limited parts available. On that note, it’s time to take it apart (my stepson was quite disappointed) and build the main Ferris wheel…

The main build is split up into 5 different bags. Bag 1 builds the mini builds and the base, bag 2 builds the supports and the steps, bag 3 builds the wheel, and bags 4 and 5 each build four of the gondolas.

I let my stepson build most of the Ferris wheel, while I was relegated to the task of part-finder…

Bag 1 proceeded well. The two mini builds were soon done, followed by the base a while later. There was some playing with the balloon cart in between, which is probably a good thing, even though it slowed progress!

This step also builds the simple mechanism which turns the wheel, which consists of a couple of gears attached to a wheel and rubber tyre. A rubber band is used to apply some pressure to keep the wheel pressing upwards against the yet-to-be-built Ferris wheel.

Bag 2 builds the supports for the wheel, the sun, the clouds, and the steps at the side. There’s also a blue and grey thing at the side next to the flowers, which we suspected is a bin, albeit a very high one.

The next bag is where it really starts to come together, as we build the wheel itself. The build from here onwards is very repetitive, but thankfully the construction isn’t too complicated. I got promoted from part-finder to joint builder to help with some of the repetition, and we got through bag 3 quickly and with very few complaints about building the same thing over and over.

Once the wheel is attached, we can work the mechanism to turn it, which my stepson was excited about.

Bag 4 builds the red and green gondolas. Again, the builds are repetitive, but splitting the workload meant they were done quite quickly.

The gondolas have a simple opening door and a place for the minifigures to sit inside. The construction ensures the gondolas are kept relatively level when the wheel turns.

This bag also builds the third variation of a dog, and in my opinion it’s the best one of the three.

The last bag builds the remaining four gondolas and secures them all into the wheel via the use of minifigure hammers. By this point we barely needed the instructions for the gondolas, and with my stepson racing me to build them, we got them finished pretty quickly.

The main build is a very nice representation of a Ferris wheel, and as befits the 9+ age rating on the box, isn’t too complicated to build. Sure it’s not as impressive (or as complex) as 10247 but it’s not as expensive, and I would probably say it’s more fun to build. In addition, if you look at funfair Ferris wheels, most of them look more like this than 10247.

Let’s turn to the play value. My stepson enjoyed playing with it, and although I doubt the playability of the swinging boats, there’s no doubt that both the bumper cars and the Ferris wheel offer good play opportunities. I would say that the bumper cars offer more scope for imagination though, and so will probably be played with longer.

My suspicion with the Ferris wheel build is that the more rigid play structure created by it means it will be played with for a few days, then put on display in my stepson’s room and mostly forgotten about. That said, it’s a nice-looking set, so will look good on display.

The set has just over 1000 pieces and will cost £75 / $80 / €80 so in theory offers similar ‘price per piece’ value to other Creator sets released this year, but somehow the finished thing just doesn’t look as substantial as other sets, and I honestly can’t say I’d recommend buying it at full price.

The best way I thought about it was this: if I were in the LEGO store with £80, I’d probably end up buying two smaller sets like 31116 Safari Wildlife Tree House and 31118 Surfer Beach House instead of this. Those two sets together are £75, and although they have a few less parts in total than the Ferris Wheel, it feels like you’d be getting more for your money.

So in conclusion, it’s a nice playable set which will make a great addition to a funfair layout but I think there are other sets which are better value, but if you can get it for 20% – 25% off, then I’d recommend it, and you and/or your young ones will enjoy playing with it.