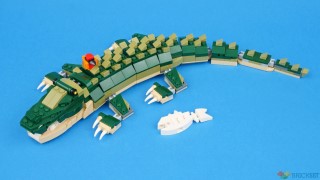 Large-scale animals are one of the highlights of the Creator 3-in-1 theme and this year we’ve been graced with two of them: 31112 Wild Lion, and 31121 Crocodile which is released next month.

In addition to the croc, the set builds a frog and a snake, and in this review I’ll take a look at all three of them.

Will you need to buy three sets to display them all the animals at once, or will one be sufficient?

Parts are packed in numbered bags and should you wish to build the alternate models first, as I did, you’ll need to empty all three bags out before you begin. However, with only around 450 parts, many of them small, it’s not too daunting.

The frog is quite chunky and while the head and body look OK, the legs and feet look a bit clumsy. Their appearance is not helped by the prominent grey of the Mixel joints.

The amphibian has a retractable tongue which is moved by pushing and pulling on its ‘tail’. A small 2-piece fly is provided for it to catch.

It’s a decent enough and fun model that kids will enjoy building, but nothing special.

The snake is made up of ten sections and when laid out straight measures about 45cm. Most of the connections between them use two pairs of the ball and socket connectors, one above the other, which keeps it from flopping down when you pick it up.

The head and the section behind it are connected in a way that facilitates vertical rather than horizontal movement so that the head can be raised, although not by much. Nevertheless, it’s possible to pose it realistically.

A small 8-piece rodent is provided for the snake to consume.

I particularly like the serpent’s eyes, which are created using a yellow 3l bar with round 1×1 ‘polo’ plates on the ends.

The alternate models are nothing special but the semiaquatic reptilian predator is spectacular! Everything about it looks very realistic. The colour-scheme is spot-on: dark- and olive-green on its upper body, tan underneath, and a splash of pink in its mouth

The cheese slopes on its back work well as the peaks and troughs of its scaly armour and of course it has a fearsome looking set of teeth and claws.

What I found interesting, something I’ve not noticed in other Creator 3-in-1 sets that I’ve built, is that several pieces that are required for the frog and snake but not this one are buried inside the croc’s body: the frog’s eyes and the two pieces for the fly, for example.

Its body and tail are built in eight sections which are connected using ball-and-socket joints. The gaps between the sections of its body are small, so they are not unsightly. There’s not much of a range of movement, but it’s just enough to form a realistic and graceful twist.

Two pairs or ball joints connect the body sections, but the tail parts use just one pair, thus allowing it to whip around in all directions.

Two ancillary builds accompany the carnivore: a fish skeleton and a small bird. I suspect crocodiles eat fish whole and don’t spit out the bones, but it’s a fun little model nevertheless.

Google provides plenty of pictures of birds perched on crocodile backs and heads, and one brave species, the Plover bird, has a surprising symbiotic relationship with the predator, which allows it to enter its open mouth to feed on rotting flesh between its teeth, cleaning them as it does so.

It’s not quite as colourful as this little fellow, though.

The main model is excellent and in my opinion the best Creator animal to date. It’s very realistic and looks for all the world like a baby crocodile when viewed from a distance. The alternate models are fun to build once, but not something you’d want to keep on display, so unlike some Creator 3-in-1 sets you’ll most likely just need to buy one copy of this one.

Thanks to LEGO for providing this set for review. All expressed opinions are my own.