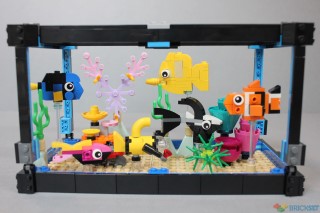 The majority of my building in the last 10 years has been limited the larger UCS Star Wars sets, and whilst they do have the occasional splash of colour, they tend to be primarily grey, black, white, or occasionally brown. And, the construction also tends to follow a similar pattern, which I’ll admit I find oddly reassuring in seemingly ever-changing world!

However, when Huw asked if I’d like to review 31122 Fish Tank, it seemed like a great opportunity to step out of my usual comfort zone and to try something a little different, and a lot more colourful!

In truth, I think the only 3-in-1 set I’ve ever built was the delightful 31021 Furry Creatures. I’d actually purchased it for my wife with the intention of ‘introducing’ her to the wonders of all things LEGO, but she looked less than impressed, so it ended up in my collection. In hindsight, whilst the cat and mouse were unquestionably cute, the set might have lacked a little colour. That can’t be said of this though, it’s positively overflowing with it!

In keeping with the others in the Creator 3-in-1 range, the front of the box displays a large image of the main build, with smaller inserts for the alternative models.

The set includes three instruction booklets, with the parts divided between three bags; two large which are only partially filled, plus a smaller one. There’s a total of 352 parts, including an impressive mix of colours; I was surprised to find that the set includes 30 blue inverted brackets which are barely visible in the box images and 18 black brackets; there’s one part which I hadn’t encountered previously, a 3×3 magenta dome top which currently appears to be unique to this set.

The construction of the tank is relatively straightforward; you firstly build the bottom section which uses all of the blue inverted brackets, followed by the top frame, which are then joined together via clips. There’s a bit of repetition, but it’s quick to do and the end result is surprisingly sturdy, if a little challenging to photograph! The extensive use of black tiles gives it a clean and refined look. And, before anyone mentions it, I missed a step in the construction of the frame, which I hastily corrected in the subsequent photos!

The next steps including building the different sections of coral, assorted fish, an urchin and, lastly, a mini submarine complete with jewel. The inverted sections of coral are particularly effective and provide a nice colourful backdrop to the fish.

There’s a nice variety of techniques used in both the coral and fish, and it’s a thoroughly enjoyable build. My only criticism is that the translucent round bricks used for some of the supports are a little on the ‘delicate’ side, so the occasional bit of re-attaching may be required, but that’s only a minor niggle.

I need to mention at this point that my knowledge of tropical fish is limited to what I’ve managed to glean from watching Finding Nemo a few times, but I was genuinely impressed by the quality of the designs.

In addition to what looks suspiciously like Nemo’s dad (Clown fish) and Dory (Regal Blue Tang), there’s also a Yellow Tang, Cardinal and an Anthias. The latter is arguably the weakest design, but it’s still a good representation of it, especially considering the scale and limited number of parts used.

The clown Fish and Regal Blue Tang are both excellent; the cone used for the ‘mouth’ section of the Yellow Tang does look a little strange, but it certainly adds character! However, when all the sections are combined, it creates a truly beautiful model.

Next on the list is the Treasure Chest; it’s a relatively simple build and my least favourite of the three. The chest itself feels quite solid, and the top is hinged so it can be opened or positioned at a range of different angles.

The exterior uses a combination of tan plates which are covered with a mixture of plates, and a few plant elements which add some much-needed colour. The extensive use of black does look slightly odd, but this was clearly a sensible compromise and preferable to the alternative of having a brown-framed fish tank!

In addition to the chest, there’s a goblet, jewel encrusted sword, seagull and orange crab. The designs of the sword and seagull have clearly been limited by the available parts; they both have a rather ‘interesting’ colour scheme, but in all honesty they’re a little too different for my taste!

In contrast, the crab is brilliant; it’s fun to build and full of character and one of the highlights of the set. The small claw can be rotated, but the larger one uses a ball and socket-type joint which allows for a greater degree of articulation.

The overall build is considerably smaller than the tank, and there’s a significant number of parts left over, but aside from adding a few finishing touches to the chest it’s difficult to say how it could be improved.

The final build is an artist’s easel, and it’s almost on a par with the fish tank. The construction of the easel itself is quite straightforward; it feels very sturdy and was larger than I’d expected. The frame is primarily black, with some blue and grey highlighting, and it provides a nice backdrop to the painting.

I was genuinely impressed by the quality and design of the parrot; it was thoroughly enjoyable to build and includes an interesting mix of parts. Some of these are layered together which gives it a semi-3D look. The end result though is truly brilliant and it would make a great display piece, as hopefully you can see from the photos. I initially thought that the grey claws were used to create the feet, but I eventually realised they’re actually the claws, which is quite logical really!

Overall, I’m highly impressed by this set. The fish tank is very well-designed, enjoyable to build and makes a lovely display piece, or playset for younger fans, although as mentioned it does require a degree of careful handling. The alternative builds are both very different; the parrot ‘painting’ is beautifully designed and looks far better than I’d expected it to. The chest is the least impressive, and several elements of the design have been clearly limited by the available parts and colours, but that’s totally understandable given the type of set.

It will be available from 1st June at £24.99/€29.99, and in the US for $29.99 from 1st August, which seems very reasonable considering the quality of two of the builds, and I’d highly recommend purchasing it if you’re looking for something a little different.