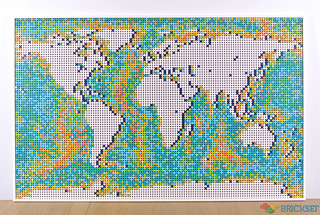 Personally, I was anticipating more conventional map colours, perhaps reflecting diverse terrain features around the world. Instead, any detail focuses exclusively upon the oceans, where vivid colours represent different depths. The land masses therefore seem relatively bland, although this design may prove appealing on display.

Reflecting the enormous size of this model, the packaging for 31203 World Map is substantially deeper and wider than previous LEGO Art products. The artwork seems remarkably drab, given the spectacular colours. However, the cardboard quality is superb, matching 42115 Lamborghini Sián FKP 37 and previous Technic supercars.

While the box seems unusual, the internal packaging corresponds with previous LEGO Art sets. Forty 16×16 mosaic panels are packaged in their own box while the vibrant 1×1 round tiles and plates are separated between bags. The instruction manual remains consistent too, displaying each mosaic panel from above and identifying the various colours using numbers.

The instruction manual also contains some welcome information about the design process, as Fiorella Groves explains that development began with a more conventional map. The colourful oceans and white land masses were introduced afterwards. I find this quite disappointing since the traditional design sounds preferable to me, although many people will doubtless favour this artistic interpretation.

31203 World Map measures nearly 104cm across when assembled, thereby achieving superb presence wherever this design is displayed. Inevitably, constructing such an enormous mosaic occupies considerable time and this process is relatively tedious, although I enjoyed identifying certain recognisable land masses on each mosaic panel throughout assembly.

Mapping the three-dimensional Earth onto a two-dimensional surface is famously challenging, demonstrated by the numerous projections which have been developed. The classic Mercator Projection is undoubtedly the most renowned and provided primary inspiration for this creation, although certain interesting modifications are apparent.

For example, Greenland is infamously enlarged on the Mercator Projection, hence this model substantially reduces its size. However, altering its scale has distorted the entire island, which has been noticeably squeezed and appears too wide. Iceland seems similarly awkward, albeit for entirely different reasons as the limited scale has entailed some obvious compromises.

India appears conspicuously inaccurate as well. The entire subcontinent looks absurdly small between the Arabian Peninsula and Indochina, even leading me to check whether I had made an error during construction. Modifications could certainly be integrated but no such alterations should be necessary, so this deviation from reality is disappointing.

Otherwise, I think the shaping of the various continents and islands is impressive. Most seem immediately recognisable and I appreciate the realistic distribution of islands across the globe, including South Georgia and the French Southern and Antarctic Lands which are both notably isolated. Several enormous lakes are also present, such as the Great Lakes of North America and Lake Victoria in Africa.

Dark blue 1×1 round tiles are placed to the east of each land mass, creating an impression of depth. This certainly appears effective for the larger continents but causes problems for many intricate regions. Italy seems especially affected by the presence of dark blue elements, which distort the distinctive Italian Peninsula. Nevertheless, I believe these artificial shadows improve the complete map.

Unfortunately, the colour scheme overshadows such qualities from my perspective. I recognise that some people will enjoy such vibrant colours throughout the oceans, which are intended to represent different depths, but I dislike the bright orange and coral shades. Moreover, omitting detail from the land was a mistake in my opinion, given the potential presence of varied terrain types and even texture.

Vibrant coral, orange, flame yellowish orange, tan and various shades of both blue and green constitute the oceans. These colours create a bathymetric map, with shades nearer to vibrant coral denoting shallower waters and oceanic ridges. I certainly appreciate some colour across the oceans but these appear much too lurid. Myriad shades of blue and green are available so those would have been more appealing for me.

The decision to use plates for the land and various 1×1 round tiles throughout the oceans also seems interesting. Plates feature distinct texture and their studs create tiny shadows, perhaps further distinguishing land from water. I am curious to experiment on that subject and discover whether employing white plates or tiles produces a substantial difference.

An attractive white frame surrounds the map, contrasting with earlier LEGO Art designs which have included black frames. The actual structure remains consistent though and is particularly important for strength here, ensuring that the considerable weight of the model does not cause certain sections to detach accidentally. Furthermore, I think the white frame looks marvellous.

Forty white cones are provided to identify locations around the world, perhaps marking those you have visited or wish to visit in the future. Each cone can be colour-coded using the round tiles which is a nice idea, but these markers become lost when positioned near coastlines. An exclusive colour chart also accompanies the mosaic and helps to identify the different colours during construction, therefore integrating printed columns of numbers.

10,240 elements are combined across the structure, excluding those which comprise the frame and base. Several hundred 1×1 round plates and 1×1 round tiles therefore remain unused after completion, including numerous orange and vibrant coral 1×1 round tiles. However, I anticipate the teal 1×1 round tiles, 1879 of which are supplied, will prove especially appealing as they are exclusively available here!

31203 World Map could prove extremely popular and does provide outstanding value, costing £229.99 or $249.99 which is significantly cheaper than I anticipated. However, I fundamentally dislike the colour choices here. Upon receiving the World Map, I was quite disappointed to find such unconventional colours and the decision feels surprising because a traditional map would presumably be more marketable.

The packaging encourages customisation of the oceans and such vibrant colours are perhaps useful there. Unfortunately, I have no desire to customise the oceans with random patterns, so these elements provide limited utility. Their incredible quantities are definitely appealing though and some colours could comprise a more realistic world map, including teal and medium azure.

Removing any detail from the land masses was another error, in my opinion. I understand that including national borders may have been challenging, especially in Europe and Southern Asia where nations are commonly rather small. However, including terrain features would have been achievable and would have considerably enhanced my appreciation for the World Map. Instead, this design is extremely disappointing.