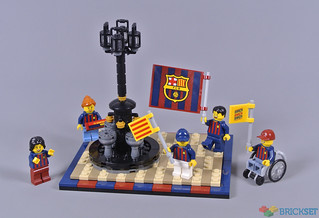 Five minifigures are provided, each wearing Barcelona’s famous blue and garnet football shirts. Those distinctive shades are represented by dark blue and dark red which work nicely together, continuing across either side of each torso. The red and yellow stripes around the collar appear perfect too. Modern shirts feature entirely yellow collars, but that would become lost against the minifigures’ skin tone.

Of course, sponsors are omitted, but these colours alone are sufficient to distinguish Barcelona and the badge shape seems authentic. While their shirts are identical, these minifigures feature legs in different colours, ranging from white to dark blue. Furthermore, an appealing selection of headgear accompanies the minifigures, including hair pieces and caps.

Five different heads are also supplied, although these are relatively common. This alternative crying face appears particularly appropriate currently, perhaps in response to the departure of Lionel Messi. Another head displays happy and sleeping faces, while the remaining three each feature standard smiles.

One minifigure includes a wheelchair which is appreciated, especially because the wheelchair elements rarely appear in smaller sets. Several flags and an FC Barcelona scarf are provided too, each integrating stickers. Printing would have been preferable, naturally, but the stickered designs are superb, including the striped Catalan flag and the year of FC Barcelona’s founding.

Sporting fans commonly gather at particular locations associated with their team and the Font de Canaletes performs that role for FC Barcelona. The drinking fountain is relatively modest in size, although its association with the football team and prominent position on La Rambla have ensured its renown. This rendition is certainly recognisable, capturing important features of the original fountain.

Beyond the actual fountain, the surrounding tan and dark tan plates and tiles are recognisable too. La Rambla, the famed street through the centre of Barcelona, features a distinct patterned pavement which comprises wavy stripes, alternating between lighter and darker colours. Those colours are depicted here, but the wavy stripes are replaced with a chequered design.

Dark blue and dark red tiles are positioned around the pavement, further relating this model to FC Barcelona. Additionally, I think these splashes of colour are important because the fountain and its base could otherwise appear bland, lacking any brighter shades. Fortunately, the muted colours are faithfully recreated on the drinking fountain.

Golden 1×1 round plates with hollow studs represent the taps, resembling their original bronze colour. They stand out against the neighbouring black and dark bluish grey elements, although their orientation varies from the catch bowls underneath. That seems decidedly odd, especially because these taps can easily be rotated to match the printed bowls, as exhibited below.

While certain decorative features are missing, these lanterns appear suitably ornate and I like the dark bluish grey highlights. Unfortunately, the lamppost underneath seems relatively broad when compared with the source material. Minifigures cannot therefore grip the lamppost, which restricts display options as Barcelona fans are known to climb the fountain during celebrations!

40485 FC Barcelona Celebration is certainly unusual, but complements 10284 FC Barcelona Camp Nou nicely and features an excellent selection of minifigures. In fact, including five such minifigures seems remarkably generous, particularly because the display base only comfortably accommodates four, with their colourful banners.

The fountain is comparatively simple, although significant details from the original location are present and this model could be integrated with traditional LEGO cities. However, the potential for true interaction between minifigures and this drinking fountain would have been appreciated, thereby achieving absolute realism during FC Barcelona celebrations!