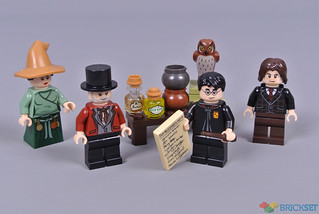 Restrictions surrounding new parts have proven decisive here, compromising the designs. Furthermore, discerning any connections between them is difficult, especially since two characters are unnamed! Nevertheless, the presence of an exclusive printed tile, featuring members of Dumbledore’s Army, is remarkably appealing.

Numerous depictions of Harry Potter have appeared throughout the range and this example takes inspiration from Order of the Phoenix, based upon his height and hairstyle. This double-sided head features cheerful and frustrated expressions while the torso originally appeared in 75978 Diagon Alley, hence its availability here is appreciated.

Despite resembling Rufus Scrimgeour in official images, the next minifigure portrays Borgin from Borgin and Burkes. This double-sided head seems appropriately sinister, returning from 75290 Mos Eisley Cantina, while the hair piece appears reasonable too. However, this formal jacket does not suit Mr Borgin, whose onscreen clothing is notably shabby. A new piece could definitely have improved this minifigure.

Borgin carries no accessories but Harry’s wand is supplied, alongside the Dumbledore’s Army membership list. This component looks magnificent, corresponding exactly with the movie and including authentic signatures for eight major characters! Moreover, their order actually reflects the onscreen list, albeit excluding anybody underneath Neville Longbottom.

Two unnamed characters accompany Harry and Mr Borgin. These consist primarily of existing elements and appear suited to the Wizarding World, although I am surprised that identities are not attributed to both minifigures. For example, the male character vaguely resembles Dedalus Diggle, whose prominence in the books is significantly greater than during the movies. The top hat certainly works for Diggle.

Minifigure packs frequently contain small models to complement the characters, although this example provides no clues regarding the unknown minifigures! Nevertheless, this dark brown table looks reasonable and supports various interesting accessories, including cauldrons and one reddish brown owl. This owl design is relatively common, unfortunately.

However, two appealing printed elements are provided. The jar of Acid Pops is only otherwise available with 76388 Hogsmeade Village Visit, while the second jar, which stores metallic gold leaves, has appeared twice before. This container is ingeniously assembled, using an inverted 1×1 tile with bar to represent the narrow neck.

40500 Wizarding World Minifigure Accessory Set contains a bizarre collection of minifigures, without an apparent relationship between them! However, some uncommon pieces are used here and the generic characters look perfect for populating Wizarding World models, such as 75978 Diagon Alley. I would have preferred four identifiable minifigures though.

Of course, the most appealing aspect of this set is easily the Dumbledore’s Army membership list, which demonstrates outstanding accuracy to the movie. The printed jars are also splendid. Despite these qualities, I think clarifying the precise theme of minifigure packs is significant, so the set disappoints in that regard. Even so, this may be worth purchasing for those planning to populate Harry Potter models, especially at the price of £13.49 or $14.99.