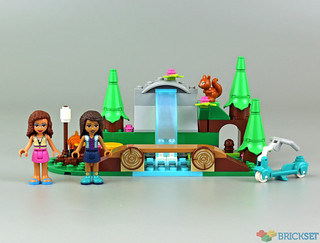 The smallest of the second half Friends sets is 41677 Forest Waterfall. It’s also the set that caused the most excitement, especially among non-Friends aficionados, likely because it’s a great smaller set that’s ideal for the start (or really entire) forest scene. There are some interesting parts included so read on as we check out this rather appealing set.

One surprising thing about this set, especially for a Friends offering – there are no stickers! While that might disappoint some of the target audience, most AFOLs looking for a straightforward scene will be quite pleased.

Another nice surprise is that there are two minidolls in a small set. I’ve mentioned this before, but this continues the trend of more minidolls (than previously) in sets and I’m quite happy to see this trend. Both minidolls we’ve seen before, but only a few times previously. Olivia is wearing the same top first seen in 41392 Nature Glamping, and it’s paired with a fuchsia miniskirt with blue flip flops. Andrea’s top is first seen in 41344 Andrea’s Accessory Store but has only been seen once a year since. She has a navy blue skirt paired with teal boots with metallic plates on the front.

Both minidolls have some printing on the back, which is always welcome. Olivia comes with some binoculars (not pictured). The obligatory Friends animal in this set is a squirrel, which has been in several Friends and Disney Princess sets.

The Friends are getting around the forest in a scooter. It’s here in teal, and it’s only the third time it’s been included in a set.

The model comes together quickly, and depicts a tranquil forest scene with a small waterfall. I love the transparent pearlescent blue piece for the waterfall – it’s terrific that this piece comes in a small set.

There is a log bridge that crosses the stream. On one side of the bridge is a small campfire, complete with two stools, a marshmallow ready for roasting, and a mug.

The other end of bridge includes the squirrel’s perch, and two very attractive trees. I really like the technique that’s been used for them.

As is not unusual with Friends sets, there’s something extra to be found. Looking at the back of the model, there’s a jewel hidden behind the waterfall. There’s also a little treasure for the squirrel, with an acorn that’s been tucked away behind one of the trees.

It’s such an idyllic scene, Andrea and Olivia aren’t the only ones who want some marshmallows by the campfire.

(Note: sloths are not included in this set.)

This is pretty much an ideal small Friends set (93 pieces, $9.99, £8.99, 9.99€). It’s perfect for an impulse spend or pocket money purchase. It’s a lovely little scene, the parts selection is quite nice, the tree builds are great. Plus it’s the first Friends sets in a while that doesn’t have stickers!

Thanks to LEGO for providing a copy of this set for review. All opinions expressed are mine.