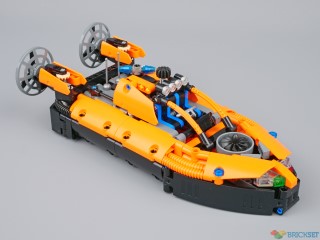 The just-released 42120 Rescue Hovercraft is only the fourth Technic hovercraft that LEGO has produced as a primary model, and the first single-seater one since 2013. Perhaps the reason for this is that there is not much functionality that can be incorporated into such vehicles.

Unfortunately, as you will see, the major function built into this one is flawed…

One particularly interesting aspect of the set is that it’s a rescue hovercraft, just like the ill-fated 42113 Bell-Boeing V-22 Osprey was supposed to be a rescue aircraft, and both models share the same stylised ‘R’ in their ‘Rescue’ logo.

I did not apply the stickers because it looks fine without them.

Construction is straightforward as there’s little in the way of mechanisms to grapple with whilst building.

Unlike real craft, this one has wheels underneath to enable it to be ‘hovered’ along the table. The lime green rear wheels are linked to the rear fans which causes them to rotate when it’s pushed. The front ones are connected to a steering mechanism operated by a gear above the cab that turns them and the fans from side to side in unison.

With the front wheels straight the two orange beams leading to the back are level. When the wheels are turned, one orange beam is pushed and the other pulled which twists the fan housings (which have not yet been added)

The lower black section represents the flexible skirt that fills out with air to keep the craft afloat. I do not like that the sides of it are vertical fore and aft, but curved in the middle There are suitably sized 7×3 flat panels available now which would have enabled a more uniform look.

As it’s pushed across the table the blue lights behind the cab and the fans rotate, but unfortunately the 6-wide parabolic reflectors used here as fan guards turn as well, which somewhat defeats the object of having them.

The fan in the bow, used to inflate the skirt, is not connected to anything so needs to be turned by hand.

The design of the hovercraft does not look to be too practical for use in rescue scenarios: there’s nowhere for the rescued to sit or stand, and I suspect getting in and out of the cab to offer assistance while the vessel is at sea would be difficult.

Civilian rescue hovercraft do exist in real-life although those used in the UK by the RNLI are much larger than this and will accommodate a crew of up to four, with plenty of room for stricken seamen or swimmers.

The rotation of the fan guards in unison with the fans is a major flaw, and it bothers me, and I’m not too enamoured with the design of the skirt, either.

However, overall it’s a good-looking model, but one that will appeal to kids more than adults, as they are more likely to overlook its shortcomings.

Here’s a modified version with flat skirt sides. I didn’t have any black 3×7 panels so used a 3×11 and some 1×3 beams. Does it look better? I think so.