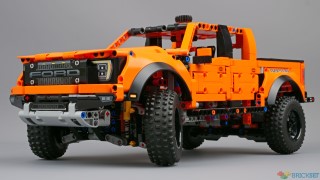 The F-150 Raptor is the high-performance version of Ford’s best-selling pickup truck. The latest incarnation, which was launched in North America this year, is the first of the motor company’s vehicles to be modelled in Technic.

The 1,379-piece 42126 Ford F-150 Raptor is released on October 1st, and it looks to be a faithful reproduction of the vehicle, offering a reasonable level of functionality for a decent price, so let’s see if that’s the case.

There are no new parts in the set, but there are number of recolours, mostly orange beams and panels.

As we have come to expect with recent Technic sets, it comes with an extensive sticker sheet.

Construction begins with the front of the vehicle The front axle features double wishbone suspension and steering, but it is not connected to the drivetrain and the 6-cylinder engine, so unlike the real F-150, the model is rear-wheel drive only, although of course it doesn’t matter in an unpowered vehicle.

The rear axle assembly, front bodywork and seats are added from the parts in bags #2.

The rear axle is a live axle, which means that the whole assembly rocks from side to side around a central pivot, through which a shaft provides power. In the case of the model the shaft is connected to the dummy engine thus causing the cylinders to move when the vehicle is pushed along, in time-honoured fashion.

With the internal complexities out of the way, the remainder of the build — the bodywork — is straightforward, so the finished model takes shape in no time. Overall I think the build took me about 3 hours.

I think the designers have done a good job of reproducing the shape and contours of the F-150 within the limitations of the Technic system, mostly without recourse to System parts, which I always appreciate.

In terms of functionality, it offers steering using the gear on the top of the cab, effective suspension, and opening doors, bonnet and tailgate (not shown here). That doesn’t sound like much but other than a complex gearbox and 4-wheel-drive there’s not much more that could be added. Implementing them would just increase the cost and complexity without any real benefit, so I have no complaints.

There’s a fair amount of detail in the cabin, including rear seats, although there’s not a lot of legroom!

The drivetrain and suspension can be admired from below.

The Raptor logo on the rear wheel arches is printed, but all other decorations are stickers.

It would look odd without them, with no front lights or engine grille, for example.

The off-road tyre is new this year, having first appeared in the abysmal Control+ 42124 Off-Road Buggy. It’s not prototypical at all, but it looks like the sort you might put on the vehicle for specialist off-road use.

Some vehicles are better suited to replication in Technic than others and I think the Ford F-150 Raptor is one of them. It makes an eye-catching display model, in part due to the orange livery, and I am sure it’ll be immediately recognisable to those familiar with the real truck.

Overall, it’s an excellent model: not too big, not too complex, and without Control+ to bloat the price and impede playability.

The only fly in the ointment is the ridiculous price differential between the USA and Europe. In the former it’s priced at $99.99 which, for almost 1400 pieces, represents good value for money. However, in Germany the retail price is €139.99 (~$163) and in the UK it’s £129.99 (~$177). I can only guess that this is to allow Amazon and other retailers to offer a 30% discount soon after release, as is often the case with big Technic sets, which would then bring the prices more in line.

It can be pre-ordered at LEGO.com, but it’s already reduced by 12% at Amazon.co uk, to £115, so if you’re in the UK and need to have it on the day of release then that looks like the best place to order it at the moment.