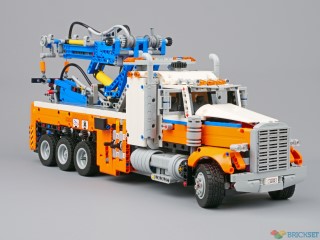 Two large Technic sets are due for release on August 1st. 42128 Heavy-Duty Tow Truck, the subject of this review, and 42129 4×4 Mercedes-Benz Zetros Trial Truck, which I’ll take a look at early next week.

Both contain around 2000 pieces. This one contains pneumatics, the other a Control+ hub and motors. One is half the price of the other.

The pneumatic system makes a welcome return in this model: it’s not been used in a Technic set since 2018.

There is one part in the set that has not appeared before now: an 11-long version of the beam with perpendicular holes, 71710 BEAM 15 MODULE, W/ 4.85 HOLE, NO. 1, which was seen in models released earlier this year.

There are also a number of re-colours, most notably the gear rack housing in blue.

I’m sorry to say that I omitted to photograph the sticker sheet before applied some of them. It contains around 30 stickers, some or which are purely cosmetic and others which label the various controls scattered around the model. I elected not to apply most of the former as I felt they were a bit unrealistic and childish.

Parts are provided in bags numbered one to four, so construction is divided accordingly.

Although the models features pneumatics there are a number of mechanical functions in it as well which require some fairly dense and complex mechanisms buried within the chassis. The rear end is constructed initially using parts in bags #1, which includes most of them.

Bags #2 complete the back of the vehicle, which includes the pneumatic controls and the towing fork at the rear.

Unlike in the olden days (the 1990s!), the flex tubes are all cut to length: there’s no need to do so yourself. The tubes are mostly routed internally so are largely hidden away when the model is complete.

A 6-cylinder engine is positioned above the front axle which is linked to the rear wheels.

After the parts in bags #3 are exhausted the vehicle’s cab and the front of the chassis have been competed.

Parts in bags #4 finish the model off by adding the bonnet and towing arm.

The truck is bigger than I expected it to be: it’s about 60cm long and 15cm wide. The orange, white and blue colour scheme is attractive although without the stickers applied the white panel behind the cab does not look good. It’s relatively easy to fix that, though, as I will show below.

The vehicle is equipped with a towing fork and an extending crane arm, which should enable it to recover just about anything.

As I mentioned, I did not apply most of the cosmetic stickers, but did attach those relating to the operation of the model: without them, it would be guessing game!

A minor flaw in the design concerns the wing mirrors: they do not protrude far enough for the driver to be able to see beyond the exhaust stacks.

The other thing that bugs me is the gap at the front of the front wheel arches. It’s particularly noticeable in this picture. Try as I might, I have not found a satisfactory solution and I guess the designers could not come up with one either.

Other than that, I am satisfied with its appearance and thankful that the use of System parts to improve aesthetics has been kept to a minimum.

A model of this type and size needs to do a lot more than look good, though, and this one does not disappoint.

Starting with the basic mechanical functions, the front wheels can be steered using the gear on the top of the cab, the bonnet opens to reveal the 6-cylinder engine, which ‘works’ as the vehicle is pushed, and the cab doors can be opened as well.

All other functions are operated using controls on the sides. On the left, a single pneumatic switch raises and lowers the towing fork while the two gears above the wheels tilt the fork and raise/lower the third rear axle.

On the right-hand side, the pneumatic controls raise and lower the crane arm, and extend/retract it. The two gears operate the outriggers and rotate the crane arm.

This is the first Technic model to feature an axle which can be raised and lowered. Typically, vehicles run with all wheels on the road under heavy load but raise the axle to reduce friction and thus fuel usage when it’s not needed.

The outriggers at the sides are neatly contained within the bodywork. They, and two more at the back, are lowered and retracted by means of small linear actuators by turning the gear on the right-hand side of the vehicle.

Here, the crane arm is fully raised and extended, the towing fork has been lowered and raised off the road, as it would be when towing. The pneumatic cylinder for pressurising the system can be seen just behind cab.

The vehicle in 42098 Car Transporter and also the 42093 Chevrolet Corvette ZR1, both released during 2019, look to be to scale with the truck and in fact the lugs on the towing fork mate with a hole in the chassis of the former which enables it to be towed securely.

The final function I have not mentioned yet is the crane hook, or hooks, as there are two independently operated ones, which can be pressed into service when recovering cars from ditches.

Without the stickers the white panel behind the cab sticks out like a sore thumb, but it can be replaced with orange and white beams to continue the split colour scheme. The exhaust stacks attach to it, which complicates it slightly, but it was easily done, and I think it looks better than the stickered version, and certainly better than with the plain white panel.

I could have continued the blue line across it too, although blue 5l half-beams are like rocking-horse droppings, and it might have looked odd ending abruptly where it meets the white line across the top of the rear bodywork.

Official image of the stickered version for comparison:

For those that prefer their Technic ‘old-school’, with lots of functionality but not a motor in sight, this is pretty much the perfect model. It packs in a lot of mechanical and pneumatic functions into a colourful and attractive vehicle. Everything works as it should and there’s something very satisfying and tactile about operating the pneumatics, which is sorely missing from the non-haptic smartphone interface of the Control+ system.

I’m not over enamoured with the stickers, or the reliance on them to address the white panel cosmetic issue but, this being LEGO, the model can be modified as I have done should you wish. The only cosmetic issue that’s not easily resolved is the hole by the front wheel arches. It’s very unsightly, but not a show-stopper.

Value-wise, I think £140 and in particular $150 is a fair price for model of this size and features. However, if past precedent is anything to go by, it’ll be reduced down to £99 at Amazon before Christmas, which of course will make it an even better buy.