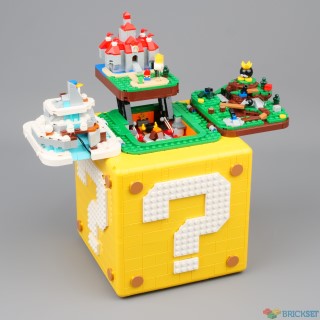 71395 Super Mario 64 Question Mark Block is the second Nintendo set aimed at adults and its unveiling last week generated a lot of interest and discussion.

It’s certainly an unusual and unexpected model, and one that should delight fans of the Italian plumber’s exploits in his first 3D adventure.

Let’s discover all its secrets…

Note: this article contains spoilers and reveals features that are not evident in official images.

67810 BRICK W/ BOW 2X2X1 1/3, below left, was introduced last year and has since been produced in five colours. It’s new in yellow here and the only reason I am pointing it out among the dozens of other recolours in the set is that there is now a plate to match: 6365891, a 2×2 curved corner, which is the only new-shaped piece in the set.

There are no stickers at all: all the decorated pieces are printed.

The block is about 17cm / 22 studs square. Externally it looks symmetrical and featureless, and at first glance the secrets it holds inside, or how to open it, are not evident at all.

Pressing down on the edge of the top face causes one of the sides to pop open, pushed outwards by the assembly inside.

The assembly has curved corners which ensures it can be pushed further round smoothly while elastic bands attached to the hinged side stop it from opening too far.

When the movement is complete, the elastic bands pull the side in to shut it, leaving the assembly sitting on top of the cube.

Pulling the sides down causes the top of the centre section to spring open to reveal four detailed vignettes representing levels from Super Mario 64: Peach’s Castle, Bob-omb Battlefield, Cool, Cool Mountain and Lethal Lava Trouble. They are populated by a number of microfigures, including Mario, who’s outside Peach’s Castle.

That’s not all: There’s another secret on the front face that is not shown in the official images, or mentioned in the set’s description at LEGO.com.

So, **Spoiler alert**, a door slides upwards to reveal Bowser!

Pushing Bowser down, or removing him first then pushing down on his pedestal, causes a flap to open underneath.

On the back of the flap there’s a turntable operated by two splat gears upon which Mario and his archenemy can battle it out.

The antagonist is about 4cm tall and cleverly constructed using a hinge brick to attach his shell which, unlike those of similar creatures in the Super Mario play sets, is brick-built.

The cube hides a lot of hidden complexity, as you might expect for such ingenious opening mechanisms.

It’s interesting how seemingly random large pieces like window frames and half-cylinders have been used to simplify construction and keep the piece count down.

At this point the exterior of the cube is complete, apart from the two side faces which are added at the end.

The vignette assembly inside the cube is built in four stages, one for each of the scenes. Its base is covered in 64 yellow 11203 FLAT TILE 2X2 INV. which, when the cube is closed, form the top face of it.

Peach’s Castle is spring-loaded with the help of elastic bands. When it’s pushed forwards and sides folded in, they hold it in place. When they are folded back down, it automatically pops up to reveal the lava level underneath.

The assembly is then mounted onto the cube via small ball joints hidden in the sides which allow it to rotate.

Finally, the question-mark side panels are added to complete the cube.

If you have the Mario or Luigi interactive figures they can be used to scan a barcode hidden under the castle. The press release states that “Fans can also add their LEGO Mario or LEGO Luigi figures for unique music and sounds from the video game, plus seek out the hidden Power Stars that reveal secret reactions from the figures. Hints for how to find the Power Stars can be found in the Building Instructions.”

I’ve not yet done that but will do, and post a follow-up article if it’s worthwhile doing so.

Those with fond memories of Super Mario 64 will enjoy all the printed tiles, characters, small details and hidden areas within the vignettes. Unfortunately, I have never played it, so they don’t mean much to me.

I think it’s fair to say that there’s never been a LEGO set like this and I applaud the company for continuing to innovate and produce models that are unexpected and out of the ordinary.

The concept is clever, and the mechanisms ingenious and flawlessly implemented. Fans of Super Mario will enjoy the detailed vignettes and micro-figures, and recalling how they relate to the game.

The thing that puzzles me slightly, though, is that it seems yellow ? blocks did not even appear in Super Mario 64, and as much is admitted in the preface to the instructions, so it’s odd that the set is being associated with that particular game.

Nevertheless, if you’re a fan of the Italian plumber you probably won’t worry about that: once you’ve enjoyed the build and admired the vignettes and mechanisms yourself, you’ll be having too much fun asking those who are not familiar with it whether they can discover all of its secrets!

If you’re not a fan, it probably won’t hold that much appeal and, let’s face it, there are dozens of big sets vying for our attention this year, so you’ll probably want to spend your money elsewhere.