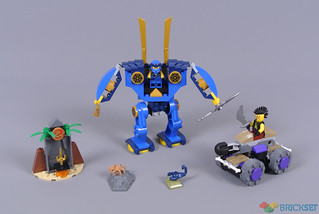 Unfortunately, such simplification here appears extremely dramatic and the resultant design scarcely resembles 70754 ElectroMech, instead featuring bizarre proportions and sparse detail. Compromises are unavoidable when 4+ sets are designed, although few creations have appeared as overtly unsophisticated as this mech.

70754 ElectroMech originated from the Tournament of Elements, where the ninja lacked their traditional hoods. Nevertheless, this Jay minifigure does feature a blue and dark blue element which seems reasonable, although matching dark blue highlights across the torso and legs are noticeably scarce. The design remains relatively cohesive though, in my opinion.

These body components are based upon the Tournament of Elements and accordingly return from two previous sets. The intricate Ninjargon text reads ‘Master’ and I love the metallic silver fastener that adorns the torso, resembling lightning bolts. The double-sided head is particularly common and displays happy and angry expressions. Unfortunately, no alternative hair piece or accessories are provided.

Eyezor does wield a roughly-hewn sword which is welcome, deviating from his two previous appearances during January. Otherwise, the minifigure remains unchanged. The intimidating Anacondrai tattoo on Eyezor’s head looks excellent, especially in combination with continued purple decoration across both the torso and legs. His vicious expression looks perfect too.

An attractive Anacondrai emblem appears on the reverse of the jacket while interlocking jaws snake jaws form an interesting belt buckle. These repeated details are appealing and the legs feature inverted colours when compared with the original Eyezor minifigure, released in 70746 Condrai Copter Attack. Ideally, some additional Anacondrai cultists might have returned for the Legacy range but this minifigure is impressive.

Multiple models are provided here, the smallest of which are rocks where native animals are residing. These seem superfluous to me, although LEGO creatures are always welcome and this dark blue scorpion is relatively uncommon, appearing in three previous sets. Using these few elements to improve the next structure might have been beneficial though.

Shrines have appeared throughout NINJAGO, displaying various mystical weapons and other artefacts. This example is fairly simple, consisting primarily of one rock component, but seems reasonable in my opinion. The pearl gold sai stands out against the dark bluish grey rock and I love the printed dragon placed above the weapon, returning from 71707 Kai’s Fire Dragon and 71703 Storm Fighter Battle.

Anacondrai vehicles traditionally display dark tan and purple accents so I am pleased to see those colours again here. Otherwise, this design is particularly bland, comprising four wheels around the standard 4+ chassis component. The bones which are positioned on the front and back look good though, along with printed wooden planks that only appear in three other sets.

The missile launcher introduced during 2020 returns here, mounted on a turntable. The actual function works nicely but the launcher looks awful, featuring few parts to smooth its integration. 76170 Iron Man vs. Thanos exemplifies how such weapons may be concealed, even in 4+ sets. Moreover, the space for Eyezor atop this cannon appears extremely basic.

The scaling between 70754 ElectroMech and 71740 Jay’s Electro Mech remains reasonably consistent, measuring 15cm and 12cm in height, respectively. However, their proportions are vastly different. The modern model is substantially stockier than its predecessor and includes numerous larger components, befitting a 4+ model. Similarities in colour are certainly evident though, thankfully.

Articulation is relatively limited, as one might anticipate. Both shoulders incorporate ball joints while the hips feature click hinges and the waist can rotate. The latter joint is especially useful, although options for displaying this mech are few without articulated ankles. In fact, the stance shown below is among the only poses which maintains truly consistent balance.

While the articulation is disappointing, the most significant problems concern the torso which integrates the cockpit element from 75237 TIE Fighter Attack. The external shape looks good but the exposed interior appears absolutely dreadful, lacking controls or any protection for the driver. The printed components flanking the cockpit are appealing though.

Additionally, the golden swords mounted on the back seem reminiscent of details from 70754 ElectroMech which is welcome. Otherwise, the disappointing design features continue as the yellow Technic brick between these swords appears rather awkward and I dislike the voids in each arm. The permanently angled legs are also somewhat odd, although the feet are neatly constructed and feature pleasant yellow highlights.

Sets which are designed for younger children obviously experience restrictions and expecting them to include outstanding detail or functionality is unrealistic. However, 71740 Jay’s Electro Mech seems exceptionally terrible! This model looks completely ridiculous, especially around the cockpit which remains exposed. The supporting models appear equally bland.

Admittedly, I find various aspects of the blocky aesthetic somewhat endearing and appreciate that features from 70754 ElectroMech are retained. Furthermore, the play value is reasonable which is paramount for young children. I would not recommend acquiring this set though, even taking the justified price of £17.99 or $19.99 into account.