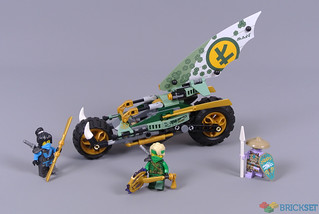 Furthermore, this vehicle incorporates excellent suspension, distinguishing the motorcycle from previous designs and reflecting the rugged aesthetic. Three interesting minifigures are provided too, including the exclusive Island Nya with Lloyd and the Rumble Keeper. These feature great detail, matching the Jungle Chopper.

Lloyd Garmadon seems exceptionally integrated with the jungle environment, corresponding with his distinctive green attire. The colour combination of green and dark green looks perfect here and the medium nougat accents appear similarly impressive. The leaves which decorate Lloyd’s torso are fantastic while the double-sided head displays unique facial expressions and camouflage paint, differing from the other ninja.

By contrast, Nya appears remarkably neat and closely resembles past minifigures. The pearl dark grey and dark azure colour scheme looks outstanding and the textured detail is splendid. Furthermore, I love the intricate white decoration across the armour, echoing waves which are ideally suited to the Elemental Master of Water. Nya’s hair component looks good as well.

Nya’s head has displayed the same cheerful and determined expressions since 2017. These look reasonable but greater variation would be appreciated. Both characters carry distinctive bladed weapons which integrate golden machetes, befitting the jungle. The trans-purple and pearl gold Storm Amulet is also provided and features magnificent moulded detail.

Several intriguing characters inhabit the mysterious island, including the Rumble Keeper who only otherwise appears in 71748 Catamaran Sea Battle. His lavender skin tone appears rather unusual, contrasting sharply against the muted armour colours. The wood grain seems realistic and I like the numerous teal highlights, appearing consistent with other Keepers.

Furthermore, jagged patterns are printed across the torso, corresponding with similar designs which cover the Rumble Keeper’s head. His malevolent facial expression looks excellent and I appreciate the distinctive elongated teeth. This minifigure wears a textured coolie, varying from the Thunder Keepers which are available elsewhere within The Island subtheme.

This minifigure wields a white spear which had only appeared twice previously, before these new NINJAGO sets were introduced. The accompanying shield is also new, displaying some additional angular patterns around an animal symbol. This design definitely resembles 71746 Jungle Dragon, although the characteristic spines which are visible here are missing from the Jungle Dragon.

Motorcycles have appeared throughout the NINJAGO range since its introduction, diverging significantly in size and design. This model is comparatively large, measuring 18cm in length, which appears appropriate for an off-road vehicle and includes enormous tyres. They provide impressive ground clearance, allowing Lloyd’s motorcycle to traverse rough terrain with ease.

Additionally, this model features a pronounced forward rake which reinforces its intimidating aesthetic. The distinctive sail accentuates that shaping too, forming a triangular profile which points towards the front wheel. Moreover, the rear axle includes basic suspension, employing rubber Technic elements which were integrated similarly on 71700 Jungle Raider.

The robust Technic frame which supports the front wheel is relatively exposed, although that structure seems appropriate here because this vehicle lacks aerodynamic bodywork. Instead, golden exhausts are fixed underneath and similar golden highlights are distributed throughout the motorcycle, including on the wheels. These hub components were introduced during 2020 and feature great moulded detail.

While the golden accents are frequent, sand green and dark green are undoubtedly the most prominent colours. They correspond with Lloyd’s associated colours and somewhat resemble the Warthog from Halo which the set designer, Theo Bonner, has cited as influential. Lloyd fits comfortably inside the cockpit, where a stickered control panel also appears.

Additional stickers are applied across the armour, notably including two towards the front that continue the delineation between sand green and dark green. Furthermore, tiny hexagons are scattered across several stickers and the fabric sail, matching details on Lloyd’s clothing which appears effective. That consistency between each ninja and their respective vehicles has been important since NINJAGO’s launch and this example seems particularly appealing.

Unfortunately, the sail is only printed on one side, although the decoration does show through this fabric. The frame is rather simple but provides adequate support to the sail and this whole structure can rotate or tilt backwards. I think the standard position looks most attractive but the articulation is certainly welcome, especially since this joint is relatively inconspicuous.

The sail and the board underneath can be disconnected from the motorcycle easily, becoming an independent vehicle. This flying windsurfer is evidently small but features reasonable detail, including adjustable sand green flaps beside the sail and two stud shooters. There is space for one minifigure to stand behind the sail, although this area is quite restrictive and the minifigure cannot generally be seen when viewing the printed side.

Nevertheless, I appreciate the separation feature and Lloyd’s chopper looks surprisingly good without the windsurfer attached. The design appears considerably sleeker in this configuration and the exposed studs immediately underneath the windsurfer look absolutely fine. However, I do prefer to display this model with the sail attached because that is its most distinctive feature and complements other vehicles.

Despite following numerous past NINJAGO motorcycles, 71745 Lloyd’s Jungle Chopper Bike appears remarkably distinctive and looks fantastic! I love the rugged aesthetic which certainly corresponds with this arduous environment and the fabric sail seems perfectly consistent with other vehicles from The Island. Furthermore, the sand green and dark green colours are quite appealing together.

The exclusive Nya minifigure provides further incentive to acquire this set, especially since the Rumble Keeper is only otherwise available in the expensive 71748 Catamaran Sea Battle. The vehicle remains my favourite aspect of this set though. Moreover, the price of £17.99 or $19.99 represents adequate value in my opinion, particularly given the size of this motorcycle.