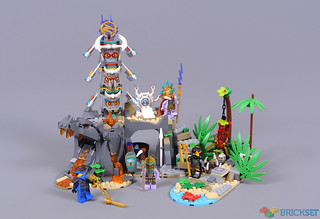 70604 Tiger Widow Island was produced during 2016 and definitely remains among my favourite location-based NINJAGO models, featuring some interesting functions and extensive detail. 71747 The Keepers’ Village includes various impressive qualities too, matching its predecessor.

The landscaping seems especially appealing and I appreciate the stylistic connections between this model and the successful Islanders range from Pirates. Furthermore, the distinctive totem appears interesting and several outstanding minifigures are provided to populate the village, including the resplendent Chief Mammatus!

Corresponding with previous seasons, Kai wears specialised attire when exploring the island, although his characteristic red and dark red colour scheme remains intact. This design strikes the perfect balance between brighter and more subdued shades in my opinion, especially with metallic gold highlights which cover the torso and legs. An exclusive hair element appears here as well, integrating a dual-moulded headband.

Reflecting his focus upon absolute strength, Cole features heavier armour than his allies and looks superb. I am especially pleased with the metallic silver scratches across the breastplate and Cole’s golden emblem is also integrated nicely. His hair component has been updated too, now including an orange headband to complement the other ninja and match the sash around his waist.

Various impressive villains have appeared throughout NINJAGO and Chief Mammatus looks especially majestic! This minifigure sports a spectacular golden helmet with dual-moulded teal blades decorating the top and white teeth on either flank. These teeth are actually represented using separate elements and could be replaced with other parts if you wish. The teal accent at the centre looks attractive too, featuring metallic gold printing.

Chief Mammatus wears a segmented cuirass which complements the helmet, featuring some additional teal blades alongside ornate patterning. The legs appear equally detailed and I love how Mammatus’ embellished armour contrasts against his lavender skin. Additionally, the dark orange cape avoids distracting from the complex decoration, providing a lovely backdrop.

Removing the superb helmet reveals continued metallic silver patterns on the head, matching those on the torso. The head also displays two expressions, although these appear somewhat similar. Naturally, the chief carries an enormous staff that conveys an appropriate impression of power and includes a trans-purple lightning bolt. However, I dislike the mixing of pearl gold with dark tan.

The torso looks equally detailed and complements the chief’s resplendent armour, combining the same shapes with unique colours. Such design continuity between characters is welcome and the contrasting materials seem appropriate, reflecting the distinct hierarchy as this warrior wears wooden armour. However, teal crystals conspicuously decorate both minifigures.

Thunder Keepers are available in three new sets, wielding unique weapons in each instance. This minifigure carries a spiked pole arm which seems fittingly rudimentary, although another such weapon appears with a heavier spike in 71748 Catamaran Sea Battle. Greater variation would therefore have been appreciated here.

71747 The Keepers’ Village comprises two distinct sections which are neatly integrated, using vegetation and rocks to disguise the connection between them. The resulting model measures 29cm across at its widest point and incorporates a delightful spectrum of colours, capturing the tropical environment which has traditionally been associated with uncharted islands.

The beach area is absolutely minuscule but features various important details, including some water with a crab which is approaching the sand. I like this colour combination of tan and dark tan beside several light bluish grey elements, softening the transition into scattered rocks. The foliage looks excellent too, although I dislike how this section protrudes from the central village assembly.

Ideally, the beach would instead have extended across the front of the village. However, I do appreciate the varying angles between sections of this model, corresponding with the natural setting. Additionally, extending this beach forwards has enabled the designer to include some interesting functions, notably including the toppled tree which appears rather unusual.

This fallen tree is surreptitiously connected to the leaves scattered across the beach and can immediately return to an upright position, as demonstrated below. Any minifigures standing on the leaves therefore risk becoming ensnared, suspended above multiple spikes! A skull signals that previous visitors to this enigmatic island have encountered the same camouflaged trap.

Another trap is concealed behind a large palm frond. Pushing the 2×2 tile which is decorated with a skull sticker will cause a leaf to swing aside, revealing a 1×1 round tile shooter situated between two trees. This function works perfectly and I like the sign which is hidden among the leaves. However, the shaping around the skull trigger could certainly have been improved and the narrower tree lacks any detail whatsoever, unfortunately.

Foliage continues around the staircase which is constructed using A-frame elements. Similar designs have appeared previously, including in 70657 NINJAGO City Docks, but these steps feature outstanding detail. Moreover, the consistent integration of jagged angles seems quite authentic and leaves are provided in three different shades of green, offering splendid variety throughout the village.

The beach and jungle are attached to the village using a single clip. This connection method feels exceptionally fragile and a proper hinge would certainly have been preferable, although permitting easy detachment is sometimes helpful for display. The various possible angles are also welcome but the standard configuration appears most impressive in my opinion.

Multiple interesting methods for constructing rocks and caves have appeared throughout the LEGO range. This design combines standard and curved slopes to brilliant effect, creating an attractive archway which seems suitably organic. I am particularly impressed with the layering here as arch bricks behind the outermost slopes produce the appearance of realistic depth.

The combination of different slopes becomes increasingly complex beside the cave entrance, where wedge slopes look magnificent together. Furthermore, I love the integration of lava and the trans-orange Power Blast element. The neighbouring shield also looks superb, resembling details from the classic Islanders subtheme where shields were commonly displayed vertically.

These shields appear throughout the new range, including an intriguing dragon symbol. This motif evidently has some importance to the Keepers as a similar design is carved outside the village, featuring menacing eyes and trans-orange teeth. The carving certainly appears rather intimidating and makes further use of different slopes to create distinctive shapes. The sticker inside the dragon’s gaping mouth looks good too.

Unfortunately, the interior is sparsely decorated. Some fish and vegetables are placed inside a cooking pot which looks nice and I like the fire pit underneath. However, the surrounding space could undoubtedly have accommodated furniture or additional storage, improving upon one clip where a reddish brown oar is attached beside the cave entrance.

The prison cell appears wonderful though, reflecting the relatively basic technology possessed by the Keepers. The door is neatly assembled using Battle Droid arms with reddish brown bars connecting them and therefore opens smoothly. However, reaching inside to situate minifigures is quite difficult, given the restricted space and the comparative depth of the prison cell.

Hinges are accordingly included and this whole wall can swing open, providing much easier access. The cell appears suitably rudimentary, containing a light bluish grey bucket beside a bone. I appreciate these sinister details which are distributed throughout 71747 The Keepers’ Village, clearly indicating the unfriendly attitude of its inhabitants!

Imprisoned minifigures can escape through the dragon carving, as demonstrated below. The lime green leaf which is situated inside is linked to a simple Technic mechanism, opening the lower jaw when the leaf is pressed. I am impressed with the subtle integration of this function, especially since the dark bluish grey Technic beam inside is camouflaged against the rock.

Climbing the stone staircase leads to the upper level, from where Chief Mammatus evidently commands the Keepers. His white throne certainly stands out against the surrounding muted tones and features an ornate sticker on the back, flanked by dark tan spikes. Fortunately, this section can be adjusted to accommodate Chief Mammatus’ billowing cape.

However, even the intricate throne is overshadowed by the spectacular Stone Golems. These vibrant statues defend the Keepers’ village and closely resemble a traditional totem pole when stacked, measuring 14cm in height from their base. Such flamboyant colours are fairly unusual within this island environment, although these certainly differentiate the magical Stone Golems from their surroundings.

The three Stone Golems are attached to a rotating Technic component, thereby causing the totem to tilt. Presumably these statues will move similarly onscreen. Furthermore, teal parts decorate the base. This colour seemingly appears on almost everything associated with the Keepers’ culture, including 71746 Jungle Dragon and their vehicle in 71748 Catamaran Sea Battle.

Despite their imposing appearance, these static Stone Golems could be avoided very easily. However, they can also separate and move independently which appears more threatening, particularly since each statue is equipped with white blades! The black Technic axles which connect the Stone Golems remain conspicuous after dividing them, unfortunately.

Stickers are applied on each character, displaying unique eyes and facial patterns that match their individual accent colours. The accompanying curved horns also seem rather intimidating. The native Keepers harness lightning powers, hence trans-purple lightning elements decorate the Stone Golems and the prized Storm Amulet is displayed atop the totem as well, where the statues can provide the best protection.

71747 The Keepers’ Village somewhat resembles two disconnected sets in my opinion. The rocky village section includes magnificent detail and interesting building techniques while the beach and jungle appear more focused upon functionality. Thankfully, those functions provide considerable play value and are integrated nicely, although the narrow tree should have been improved with additional detail.

The internal space provides scope for improvement too, although the exterior looks absolutely fantastic. I am especially pleased with the carved dragon and the textured rocks which appear remarkably realistic. The distinctive Stone Golems seem equally appealing and the minifigures maintain the high standard associated with NINJAGO. Additionally, I think the cost of £44.99 or $49.99 represents good value, based upon the size of the village.