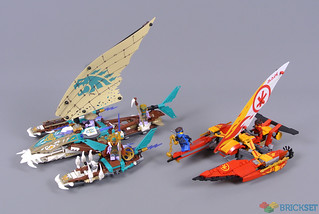 Various distinctive environments have appeared throughout the NINJAGO range and appropriate vehicles commonly accompany them. The Island continues that tradition, including the appealing 71748 Catamaran Sea Battle which contains two interesting ocean-going vessels!

These majestic watercraft certainly deviate from previous NINJAGO models and I appreciate their divergent designs, mirroring the contrast in cultures between the ninja and the resident Keepers. However, I was somewhat surprised by the price, which seems particularly expensive, following the official announcement of this set.

Contrasting with their heavy armour from Master of the Mountain, the ninja now feature more conventional attire. Kai therefore displays his traditional red and dark red colours, with golden highlights. This design looks magnificent and I love the subtle flame decoration which is visible on the torso. While the torso and legs seem reminiscent of other minifigures, the dual-moulded headband reflects the heroes’ jungle environment.

Jay appears remarkably similar to Kai, featuring the same arrangement of layered fabric with contrasting borders. However, the colour scheme is completely different and looks impressive. The flame yellowish orange accents seem particularly striking, continuing across both sides of Jay’s torso and his legs. Furthermore, I like the utilitarian straps and pouches across his chest.

Matching pouches decorate Zane, although his garb underneath is unique as the character’s metallic chest plating is partially exposed. Previous minifigures have integrated similar details and I particularly appreciate the consistent location of Zane’s pivotal power core. The medium azure printing looks great too, suiting the Elemental Master of Ice and reflecting past versions.

Each character features their normal head which is disappointing, especially for Zane whose uncharacteristic angry expression has remained unchanged since 2018. Nevertheless, these weapons seem appropriate as Kai is equipped with twin machetes, Jay wields a bladed chain weapon and Zane carries his bow. Pearl silver katana are also provided for Kai and Jay.

Collectable accessories have appeared since the beginning of NINJAGO but the treasured Storm Amulet remains identical between four separate sets. This dual-moulded component combines pearl gold and trans-purple plastics which look brilliant together while this dragon design incorporates considerable detail, without requiring any printing.

Replacing this dual-moulded design with a stud would have allowed pleasing customisation, although the ornamental teeth are removable. The chest armour includes similarly elaborate decoration, with additional teal highlights and angular patterning that appears throughout the Keepers’ culture. Metallic gold designs embellish the head, for example.

This double-sided component displays two expressions, although they seem relatively similar which is disappointing. Moreover, I think Mammatus’ lightning staff could have been improved because this accessory combines three different colours. Exchanging the dark tan 6L bar with another pearl gold element would have been preferable in my opinion.

Chief Mammatus’ subordinates share his lavender skin tone and jagged patterning. They seem particularly prominent on the Thunder Keeper, whose mask closely resembles those produced across Polynesia. I appreciate the marked consistency between the reverse of this element and Mammatus’ golden helmet, each incorporating almost identical moulded ridges.

The accompanying Rumble Keeper lacks this detailed mask, wearing a dark tan hat instead. However, both minifigures feature identical torsos and legs. Some variation would have been welcome but these designs are wonderful, matching Chief Mammatus’ armour in design. The colours are distinctive though, featuring wooden texture rather than the majestic gold worn by the chief.

Fortunately, the heads differ between these minifigures and they include unique accessories. The smiling Thunder Keeper carries an intimidating scythe while the Rumble Keeper wields a spear and decorated shield. The latter element looks splendid, featuring an intriguing creature which seemingly reappears throughout the Keepers’ island culture.

Kai’s aerodynamic vessel appears beautifully sleek, featuring narrow points towards the twin prows and smooth surfaces across the whole craft. This shape is undoubtedly distinctive and conveys impressive speed, as was evidently intended by the design. Furthermore, this colour combination of red and flame yellowish orange looks appealing and corresponds with various other vehicles belonging to Kai.

Viewing the catamaran from either side appears somewhat reminiscent of one such vehicle, 70638 Katana V11. Their profile shapes are relatively similar and this model measures 21cm long, narrowly surpassing the previous design. However, this watercraft obviously includes an enormous sail which the 2018 equivalent did not require, instead relying entirely upon modern engines.

The dagger-like twin prows successfully incorporating the 2×4 wedge plates which emerged during 2020. The layered black and red elements look superb together and I like how curved slopes smooth the transition between the forward sections and either flank. The studs behind the 1×2 wedge bows appear awkward though, interrupting an aerodynamic shape.

Technic pins connect both prows to the pontoons, creating a distinctive angle between them. The attachment point between these segments is visible but softened by the aforementioned curved slopes, once again. Spring-loaded shooters are mounted on either side and stand out among the surrounding red and flame yellowish orange elements, unfortunately. The stickers applied here look attractive though, displaying flame motifs.

While the catamaran is relatively large, there is only dedicated space for one minifigure. That seems restrictive and I think the seat could have been improved, particularly since Kai cannot actually sit while wearing his sheathed katana. Furthermore, some unsightly Technic elements are evident around the cockpit, although they are integral to an enjoyable function.

The sail is connected using a click hinge, providing adequate support and allowing this whole structure to move. While the standard horizontal design seems appropriate for a speedboat, I prefer to adjust the angle when deploying the pontoons on Kai’s vehicle. The resulting design could perhaps be described as a racing trimaran, comprising three connected hulls.

Switching the spoiler angle will deploy and retract the pontoons. This function works smoothly and I think the vessel looks good in either configuration, although those Technic pieces remain rather exposed. However, I love the four flame yellowish orange flag components which line up perfectly after extending the pontoons. These are decorated complementary stickers, featuring Ninjargon letters which read ‘Kai’.

The linkages between the spoiler and the outriggers are especially visible when viewing this model from behind. Various interesting details are also apparent though, including propellers which presumably provide the primary thrust. I imagine the sail is intended to assist when the vessel is performing advanced manoeuvres within rough seas around the island.

Additionally, this creation is considerably larger than its technological counterpart. The vehicle measures 33cm in length and incorporates multiple features resembling fish, notably including the narrow tail and teal rudder. That shape is quite attractive, although I believe positioning the sail further forwards would have visually balanced the tail more effectively.

The prow displays stylised facial features, including yellow eyes and intimidating teeth. These designs certainly look good, although placing the stickers neatly is quite challenging. Even so, the vibrant colours are appealing and continue as accents throughout this vehicle, enhancing muted reddish brown and dark tan shades. The trans-purple lightning bolts are superb too.

Matching stylised faces decorate the spring-loaded shooters. Once again, I think these could have been integrated more closely with the body, perhaps situated underneath the outriggers. The cockpit space leaves something to be desired as well, excluding any controls or detailing. Admittedly, the Keepers do possess weather-based powers so may direct their catamaran by controlling the wind.

While the central cockpit only accommodates one minifigure, two further seats are available. Both supplementary pontoons provide enough room for another minifigure, allowing all three Keepers to ride comfortably. This structure also contains storage space where reddish brown barrels are kept, each housing a trans-blue gemstone.

The second pontoon excludes that cargo area, instead featuring a rudimentary cage! I like the interlocking claws and there is adequate room for a minifigure inside, even while wearing their scabbard. However, the exposed Technic pins on either flank are rather distracting and should definitely have been covered as the model appears unfinished with them exposed.

Of course, the Technic pins are provided for good reason as both pontoons may be detached and deployed as independent vessels. They lack obvious methods of propulsion, although the lightning bolts are presumably involved. While this function is welcome, the proportions appear awkward in my opinion, especially surrounding the prominent vertical stabilisers.

After removing the pontoons, the central model remains reasonably cohesive. Teal flaps fold downwards on either flank, resembling stabilisers which would probably be necessary for the vessel in this configuration. Unfortunately, these angular flaps cannot actually extend to reach the surface underneath which seems like a missed opportunity. Such issues are becoming an irritating trend across this craft.

Contrasting with Kai’s colourful and ostentatious sail, the Keepers’ sail appears simpler. This fabric component features realistic wear beside printed stitches, showing where repairs have been made. However, the creature image returns again and includes the same distinguishing spines. The back of the sail is undecorated, although these designs show through nicely.

The tapered tail section looks marvellous, cleverly integrating a reddish brown 1x6x10 lattice element. This definitely maintains the historic aesthetic of the vehicle, corresponding with the decorative white highlights underneath in that respect. The vibrant rudder appears somewhat unusual by comparison and can rotate, presumably balancing the articulated mainsail.

Adjustable horizontal flaps are also situated beside the rudder. They seem superfluous in my opinion, hence I am inclined to fold them against the hull. I appreciate another function that is activated by pushing one of the aforementioned white structures forward though, causing twin blades to extend from the bow! This mechanism is perfectly hidden and locks in either position.

The extended blades appear rather threatening and are intended for ramming other vessels, featuring barbs which could probably slice through opponents. The vacated space behind the blades also seems reasonable because white elements are employed consistently throughout this section, interrupted only by tan brackets which remain partially exposed.

Despite neither vehicle actually qualifying as a catamaran, 71748 Catamaran Sea Battle has proven surprisingly enjoyable! Both models look impressive and incorporate superb functions, providing considerable play value. I am particularly satisfied with the clear distinction between these comparable watercraft, juxtaposing advanced technology for the ninja with the Keepers’ more traditional vessel.

The omission of any exclusive minifigures is disappointing though, especially because trailers have featured characters which are not available as physical minifigures. Furthermore, I think the price of £59.99 or $69.99 feels fairly expensive when compared with other NINJAGO sets. Ultimately, these vehicles are quite appealing but neither achieves the excellence which I was perhaps anticipating.