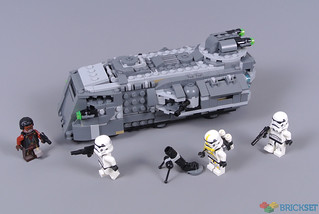 The menacing Trexler Armoured Marauder was introduced during The Mandalorian, combining heavy armour and weapons. This vehicle shares various similarities with the prominent Imperial Troop Transport, assuring uniformity within the formidable Imperial military.

Numerous functions distinguish 75311 Imperial Armoured Marauder from comparable models, especially taking the scale into consideration. Furthermore, the vehicle appears exceptionally accurate to the source material and provides excellent play value which is important, supported by an impressive collection of minifigures.

Greef Karga previously appeared in 75292 The Razor Crest but this minifigure is based upon his appearance during season two of The Mandalorian. This head accordingly features thicker facial hair, although only one expression is provided. Nevertheless, the design looks wonderful and extensive detail continues across the torso and legs.

These ornate robes correspond with Karga’s updated appearance, including golden fasteners on both shoulders with extensive detail across the waistcoat. The asymmetry works neatly too, reflecting Greef Karga’s propensity for action. This minifigure includes a standard blaster pistol rather than his previous twin pistols, which matches the second season.

Moff Gideon dispatches numerous soldiers to recover Grogu on Tython, including an Artillery Stormtrooper. These ordnance specialists are distinguished by yellow highlights which adorn their armour and the minifigure captures such details beautifully, particularly across the helmet where brilliant detail appears. Unfortunately, the printing on my helmet is slightly off-centre.

Yellow accents continue across this minifigure and the unique yellow pauldron looks fantastic. Decorated arms would have been superb, although I think the Stormtrooper seems appealing without them. Some explosive shells are printed on his back, corresponding with the onscreen character but appearing somewhat strange without any depth.

Fortunately, a separate backpack is provided too, closely resembling the classic Sandtrooper survival backpack. White lightsaber hilts represent bombs while this mortar appears authentic, despite its simple construction. The firing arc may be adjusted as the base plate and bipod are both articulated, reflecting the original weapon.

Two standard Stormtroopers are also provided. Their dual-moulded helmets have certainly proven controversial but they are exceptionally detailed, including numerous vents and other accents. Strangely, the dark bluish grey highlights present on the reverse of the Stormtrooper helmets are missing from the Artillery Stormtrooper’s helmet, as demonstrated above.

While the helmets were significantly altered during 2019, this armour has otherwise remained consistent since 2014. The detailing across the belly section appears particularly intricate and the thermal detonator on the back looks perfect, as always. The decoration on the legs seems reasonable too, although it terminates rather abruptly below the knees.

Various heads have appeared beneath Stormtrooper helmets since 2020, replacing the Clone Trooper designs which were used previously. Remarkably, two brand new heads are available here and these look magnificent, particularly because the female Stormtrooper seems suitably mean! Matching other troopers, both minifigures are equipped with blaster rifles.

Unusually, the Trexler Marauder lacks windows around the cockpit, instead featuring narrow gaps where the driver can view their surroundings. That interesting feature is replicated here, while stud shooters depict the forward laser cannons visible onscreen. However, my favourite details are undoubtedly the 2×2 angled corner tiles fixed on each side, since identical shapes appear on the actual transport.

The interior is easily accessible by opening the front and roof panels, revealing the single seat inside. The printed control console is cleverly connected to the front panel and this component remains fairly uncommon, only appearing in five earlier sets. The design looks splendid though and I love how easily the driving minifigure can be placed inside.

Characters board the vehicle through doors on either side during The Mandalorian and those doors are included here. These open in two halves which reflects the source material and the space between them can accommodate another seated minifigure. This is welcome, although weapons storage is lacking and some clips would have been appreciated here.

Another hatch appears on the roof, although this example is cosmetic rather than functional. Nevertheless, there is sufficient space to stand a minifigure here when the hatch is open, as though commanding the transport. An important 1×2 plate with side rail is situated inside this hatch, preventing the lid from closing too far.

Opening the panel behind that hatch reveals even more space for minifigures, with two more seats! This section is relatively inaccessible when compared with those towards the front, but placing minifigures inside remains easy enough. Nevertheless, some method of removing this whole internal seating area would have been beneficial, in my opinion.

The protruding sections on both flanks closely resemble the onscreen vehicle and I love how these are exploited, accommodating two decorated crates. That element was introduced with 75290 Mos Eisley Cantina and features Aurebesh text which reads ‘CARGO’. Moreover, laser cannons are positioned beside these storage boxes, rotating freely on 2×2 turntables which is sometimes irritating.

Each lateral laser cannon should incorporate twin barrels, although the single barrel features excellent texture. The dorsal turret instead includes stud shooters which are integrated neatly and the rear viewports look great, matching those at the front. Once again, the combination of light bluish grey and dark bluish grey pieces is appealing, with trans-light blue engines around them.

Rotating the external laser cannons also turns the control station underneath, since they are connected using a trans-clear 5x4x2 wall panel. The function is notably simple but ingenious, although this turret cannot rotate all the way around to prevent minifigures becoming trapped inside. However, detaching the stopper from beneath the turret removes any restriction.

Appearance, functionality and minifigures are the most important considerations for any Star Wars model, from my perspective. 75311 Imperial Armoured Marauder definitely satisfies the three factors, particularly with respect to the functions which are absolutely packed within this unassuming vehicle! Numerous seats are provided for minifigures and the rotating turrets are enjoyable too.

Furthermore, the minifigure selection is satisfying. Greef Karga and the Artillery Stormtrooper are exclusively available here, while the standard Stormtroopers are helpful for populating the transport. Of course, the Mythrol would have been another fantastic inclusion, but I think these four minifigures are sufficient, given the reasonable price of £34.99 or $39.99. I would certainly recommend this addition to the Imperial army.

Our reviews of the other Star Wars summer sets are available here: