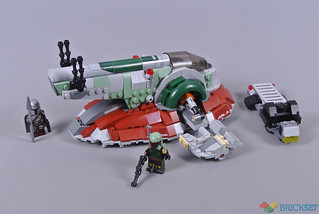 This appealing vehicle is noticeably smaller and accordingly less expensive than modern equivalents, matching examples like 75300 Imperial TIE Fighter from that perspective. Nevertheless, tremendous detail and functionality remains present, alongside an impressive Boba Fett minifigure which is based upon The Mandalorian.

Following his exciting reappearance during The Mandalorian, an updated Boba Fett minifigure has become extremely desirable and this design looks marvellous. Upon reacquiring his famed armour, Fett repairs damage and that is reflected here as metallic silver scratches are removed, when comparing this minifigure with its detailed predecessor.

This character also features a darker garment beneath his armour, further deviating from the previous minifigure. The inclusion of fabric overlapping this armour is certainly effective and I appreciate the retention of certain distinctive features, including the metallic silver emblem on Boba’s chest. Ideally, the helmet and chest armour would exhibit consistent colours, although this arrangement matches past designs.

Outstanding detail adorns both arms as well, ensuring further accuracy to the source material. Din Djarin also includes printed arms and this minifigure is accordingly identical to the variant from 75299 Trouble on Tatooine, produced during January. The intricate Mudhorn signet looks particularly appealing and I love the whistling bird launcher mounted on Djarin’s wrist.

Metallic silver is the perfect colour for the Mandalorian’s beskar armour, with metallic accents decorating the pouches and straps across his torso too. Unfortunately, the pearl silver helmet appears awkward beside the metallic silver printing. Additionally, I was rather disappointed by the absence of an exclusive head under this helmet, since the character’s face has now been revealed. Boba’s scarred head looks magnificent though.

Boba Fett includes a sand green jetpack while Din Djarin sports a dark bluish grey cape. This matches the onscreen Mandalorians, although the cape prevents Djarin from wearing his own jetpack, which is omitted. However, fitting weapons are supplied with each character, including the treasured beskar spear and Boba’s distinctive blaster rifle.

75222 Betrayal at Cloud City contained an interesting model of the Slave I, maintaining detail from previous designs while reducing the size. That creation attracted deserved attention and 75312 Boba Fett’s Starship definitely takes inspiration from the prior model, although both the scale and detail have increased somewhat. The resulting vessel seems impressive.

Comparing this rendition with 75243 Slave I – 20th Anniversary Edition and the example from 75222 Betrayal at Cloud City reveals their similarities. The new design combines attributes of those previous models, measuring 20cm in length which is dramatically smaller than the 2019 set. However, the detailing has remained intact, differing from other recent models of reduced scale that prize reasonable size over intricate detail.

LEGO has produced various Slave I models and replicating the rounded engine cowling has frequently proven difficult. This creation combines several wedge slopes to reasonable effect and makes good use of 3×3 wedge bricks which also appeared on the previous model. Some battle wear is present too, corresponding with the onscreen craft.

The boarding ramp cannot actually accommodate minifigures. However, an accurate storage space is positioned underneath the ramp and may be accessed easily, revealing an excellent carbonite block inside. The block is significantly smaller than the unique element produced for Han Solo in Carbonite, which has accompanied several previous renditions of the Slave I.

Nevertheless, this 1x2x5 brick looks superb and complements 75292 The Razor Crest, which contains two similar carbonite blocks. This example imprisons an imposing Gamorrean Guard and appears immediately recognisable, matching the appropriate minifigure. Ideally, this piece would have been printed, although I think the sticker represents an excellent alternative.

The substantial boom which extends beneath the cockpit is accurately angled here, matching other recent models of the Slave I. Moreover, this combination of light bluish grey, sand green and dark green elements appears fantastic when compared with the source material, faithfully replicating the mismatched bodywork colours that appear onscreen.

Stickers are used sparingly but successfully and this structure feels absolutely rigid. However, the laser cannons are relatively fragile which is unfortunate, although I appreciate their superb articulation. No weapons are concealed within the fuselage, but two stud shooters are situated beneath the cockpit, where an ion cannon and concussion missile launcher are located on the original vehicle.

Dark green stabiliser shrouds protect the wing supports and their curved shape looks perfect, incorporating 3×3 arch bricks which have never appeared in this colour before. The bodywork beside these shrouds seems effective too, recreating the rounded cockpit structure. I think the trans-black canopy element works neatly at this scale, although narrow gaps are present near the aforementioned stud shooters.

The cockpit is spacious, comfortably accommodating one minifigure in either flight or landing configuration. The interior accordingly includes a decorated control console and there is even enough space for Boba Fett’s jetpack, which was a pleasant surprise. However, the seat does not rotate with the wings, unlike past LEGO representations of the Slave I.

Instead, the minifigure can be placed on vacant studs and seated for flight. This arrangement appears awkward because Boba’s legs are particularly close to the canopy. Of course, certain compromises are unavoidable when constructing models at this scale and I am impressed that the minifigure can be seated in two different positions, reflecting the source material.

LEGO occasionally provides boarding ladders or storage carts which accompany larger craft. They are sometimes welcome for play but most examples are superfluous in my opinion. The boarding vehicle supplied here should definitely occupy that category, especially because this famous transport is accessed using a conventional boarding ramp.

However, the primary reason for this inclusion is actually to support the Slave I on display, as demonstrated below! The option to position this model in flight configuration is welcome and I like how the display stand doubles for play, although a dedicated display stand could probably have appeared more attractive and achieved better stability.

The current structure does work, although there are no secure connection points between the display stand and this vessel. The engine housing instead slots onto the base while the ladder nestles beneath a sand green 2×2 inverted tile. I think the designer could have employed a clip to fasten the ladder here, thereby improving this connection between the stand and the vehicle.

As normal, the wings rotate automatically as the Slave I transitions between landing and flight configurations. This mechanism is simple but ensures absolute accuracy, without affecting the appearance of each wing. In fact, the detailing is brilliant, featuring dark orange accents inside the stabiliser shrouds and adjustable flaps. The tan highlights appear authentic as well.

Viewing this model from behind reveals continued detail, including engine nacelles which are correctly positioned. Furthermore, intricate mechanical detail is present, particularly below the access ramp where 2×2 rocker elements create interesting texture. However, the upper engine band is noticeably interrupted by Technic pieces.

They comprise an excellent carrying handle, matching 75243 Slave I – 20th Anniversary Edition which incorporated a similar feature. The handle is rather small but functions perfectly, even for larger adult hands. Moreover, I am pleased by how smoothly this handle folds into the fuselage, despite obstructing an accurate engine band across the reverse.

75312 Boba Fett’s Starship achieves an unusual balance between scale and detail, capturing numerous important features of the onscreen vessel while concurrently reducing the size. The resultant model has certainly surpassed my expectations, although I am surprised by the focus upon details above size, since 75300 Imperial TIE Fighter and 75301 Luke Skywalker’s X-wing Fighter inverted those priorities.

Nevertheless, this vehicle is appealing and the minifigures are similarly impressive. Boba Fett will doubtless attract notable attention and I am pleased that both Mandalorian bounty hunters include decorated arms. The price of £44.99 or $49.99 does feel expensive based wholly upon the scale of this Slave I, although I think its quality and those minifigures justify the cost.