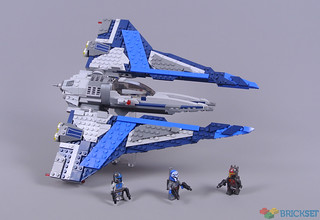 75316 Mandalorian Starfighter takes inspiration from Star Wars: The Clone Wars though and contains appropriate minifigures for that period, including Bo-Katan! This proficient warrior remains exceptionally popular while her ferocious nemesis, Gar Saxon, is provided here as well, alongside another exclusive Mandalorian figure.

Following her introduction during Star Wars: The Clone Wars, Bo-Katan Kryze has appeared prominently during Star Wars Rebels and The Mandalorian too. This character’s bright armour has remained reasonably consistent between distinct television series and her helmet displays particularly intricate detail, corresponding precisely with the source material.

Bo-Katan leads the Mandalorian Loyalist faction that emerges following Maul’s ascendancy and one such character accompanies their leader here. This minifigure is not based upon any specific Mandalorian warrior which seems strange, especially since candidates like Ursa Wren and Rook Kast occupy integral roles onscreen. Either character would have been brilliant here.

Gar Saxon appears anything but generic, sporting an extraordinary helmet which confirms his loyalty to Maul and the Shadow Collective! The distinctive horns appear slightly too short when compared with the source material, although their angular design is appealing. Moreover, I love the yellow visor and red markings that differentiate this Mandalorian helmet from others.

Unfortunately, this minifigure lacks a hair component, although his hairstyle is relatively short. Bo-Katan includes a suitable hair element though and each Mandalorian features a pearl dark grey jetpack. Furthermore, these warriors wield boxy blaster pistols which loosely resemble the WESTAR-35 weapons favoured by most Mandalorians, capturing their angular shape.

Dramatic angles are present throughout traditional Mandalorian design and the Kom’rk-class Starfighter definitely maintains that style. This distinctive vessel occupies both starfighter and transport roles and is surprisingly large onscreen, hence the LEGO creation has necessitated certain compromises. Nevertheless, this model captures an appropriate shape and measures 31cm in length, which is relatively substantial.

The most important feature of this vehicle is undoubtedly the rotating fuselage, which enables outstanding manoeuvrability while the cockpit remains relatively steady. That function is neatly integrated here, employing a ball joint to support the cockpit section. The motion certainly feels smooth and I am pleased that the cockpit cannot rotate freely because it is frequently shown in alignment with the wings, even during combat.

The wings comprise layered plates and their angular shape achieves excellent accuracy when compared with the original vehicle. The growing selection of wedge plates has proven decisive here and the patterns look wonderful, most notably beside the cockpit where 2×2 wedge plates are integrated to good effect. I think the blending of studs and tiles works nicely too.

Unfortunately, this construction method inevitably leaves the underside of plates exposed. The same problem has impacted other sets, although this example is especially bothersome as the landing configuration clearly shows the underside of each wing. That significantly detracts from the starfighter, but I am unsure how this issue could have been rectified without weakening the structure or dramatically increasing the cost.

However, the absence of landing gear to support the nose is absolutely inexplicable. The craft looks dreadful without any support, leaving the fuselage to tilt downwards. Retractable landing gear could easily have been included and was present on the rendition from 2012 so I am very disappointed by its omission. Instead, the vessel rests on 1×3 double-inverted slopes which are completely inadequate.

Substantial problems continue around the cockpit, where conspicuous gaps are visible beside the canopy. Narrow gaps are forgivable when the shape necessitates particular canopy pieces but this design is poor. Furthermore, the broader cockpit shape scarcely resembles the original vehicle, despite the addition of three stickers to augment the bodywork.

As mentioned previously, the Kom’rk-class Starfighter is considerably bigger than comparable vehicles, easily exceeding light freighters like the Millennium Falcon. Of course, recreating the vessel in minifigure-scale would therefore be impractical, although I think enlarging this design somewhat would have enhanced the model. That would benefit the cockpit in particular, which accommodates two minifigures but too closely resembles traditional starfighters.

The stud shooters mounted alongside the cockpit appear reasonable though and the textured wing mounting includes brilliant detail. However, studying the source material closely confirms that only this wing mounting should rotate, while the rearmost section remains aligned with the cockpit. These inaccuracies are frustrating because ample reference material is now available, permitting much greater improvement upon the 2012 design.

Another bewildering deviation from the onscreen vessel emerges at the back, where only one laser cannon is situated. The rotation is perfect, although a second weapon should be located opposite the first. Nevertheless, I like the simulated access ramp underneath the laser cannon, despite its obvious incompatibility with minifigures. This function is missing from official images which leaves me to wonder whether it was actually intended.

75316 Mandalorian Starfighter has proven somewhat disappointing. Certain features appear reasonably successful, including the colour scheme and wing shaping, but numerous notable issues are also present. These include the inaccurate cockpit and missing landing gear, along with the fuselage rotation which functions perfectly but deviates from the onscreen vehicle.

Personally, I would rather the starfighter had been represented at a slightly higher price point because the actual cost of £49.99 or $59.99 necessitates too many compromises. Increasing the scale of this design would enable far greater accuracy with additional functionality for play, potentially integrating troop deployment racks beneath the fuselage. However, the minifigures are truly outstanding, with Bo-Katan and Gar Saxon impressing in particular.