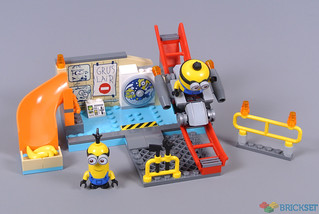 Gru’s impressive laboratory could certainly have inspired an enjoyable model, integrating various appealing functions. 75546 Minions in Gru’s Lab belongs to the 4+ range instead, simplifying the location for younger builders. This approach has restricted the potential detail.

However, these Minion minifigures are excellent, particularly given the presence of Otto. This character is only otherwise available with 75550 Minions Kung Fu Battle and this variant is exclusive. Some interesting parts are provided too.

Otto is making his debut appearance during Minions: The Rise of Gru and seemingly occupies an important role, based upon trailers. This character is noticeably chubbier than most Minions, although his blue overalls and goggles are each consistent with others. The printing here looks remarkably accurate and I like Otto’s shocked facial expression.

Moreover, the black hair component seems interesting and connects to a stud on Otto’s head. Kevin also features a unique hair piece, closely resembling the varying plant stems that have appeared in numerous colours recently. Both elements could prove helpful for other creations and they look perfect here, corresponding with the onscreen characters.

Kevin’s printed facial expression is shared with 75551 Brick-Built Minions and their Lair which seems somewhat disappointing, although the eyes vary between sets. However, both Minions here feature nearly identical eyes, differing only in their pupil orientation. Spare decorated eyes are provided for both minifigures.

75546 Minions in Gru’s Lab resembles numerous 4+ sets, integrating the 8×16 element which appears very frequently throughout this series. Medium azure seems reasonably bright for the environment but the cohesion between distinct sections of Gru’s lair is appreciated. The model feels accordingly robust too, as one would anticipate for younger builders.

Minions are known for their obsession with bananas and three bananas are therefore located beneath an orange slide. This substantial component has not been available in orange before and comfortably accommodates Stuart, although Otto’s arms overhang the side. Nevertheless, this slide is a welcome addition to the model for play.

However, my favourite section is definitely the centre, which integrates two exclusive printed elements. The first displays two screens beside a handwritten sign, identifying Gru’s lair. The rough decoration looks perfect for a young Gru and the neighbouring washing machine is fun too, containing two unfortunate Minions! I dislike the uneven addition of one 1×2 slope on top though, as if another slope has been accidentally excluded.

This decorated dish is connected using a flick-fire missile element, enabling you to rotate or launch the drum from behind. Otherwise, the reverse appears completely bland, as one may expect given the appropriate focus upon play throughout the 4+ range. There are some great details across the front though, fortunately.

While the floor surface consists primarily of the aforementioned 8×16 plate, a 8×8 lattice plate extends this space further. This extension is necessary to secure the short roller coaster track and also features a yellow railing, where some tools are kept. Moreover, another yellow railing accompanies the model, seemingly creating a buffer for the roller coaster track.

The track is extremely short and seems accordingly silly, although I can imagine the Minions devising such peculiar transportation methods. This red track component returns from 10261 Roller Coaster and the rocket-powered vehicle presents a welcome contrast, comprising light and dark bluish grey pieces. These wheels slot nicely onto the track but there is no means of securing the vehicle anywhere along this curve which is disappointing.

Play is obviously paramount in LEGO sets, particularly in those developed for younger children. 75546 Minions in Gru’s Lab succeeds in that regard, combining some interesting functions and details into a relatively small set which costs £17.99 or $19.99. The accompanying Minions are appealing as well, replicating the onscreen characters while maintaining the aesthetic of LEGO.

However, the cavernous laboratory which appears during the Despicable Me movies, to which this lair is presumably the forerunner, could have provided inspiration for an outstanding model. Expanding this set to match something like 79103 Turtle Lair Attack could have been fantastic, providing potential to include numerous creative functions and embracing the utter chaos which characterises this location onscreen.