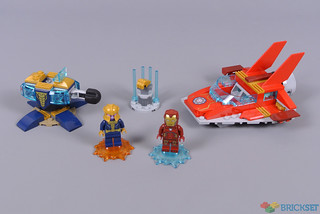 76170 Iron Man vs. Thanos features two famed characters which seem appealing, although the omission of unique minifigures is disappointing for seasoned Marvel collectors. Both characters enjoy notable popularity though and I welcome their presence together.

The accompanying models seem comparatively simple, as one might anticipate for a 4+ set. Nevertheless, these match their respective pilots and various interesting pieces are provided, including new display bases for each minifigure!

An impressive Iron Man minifigure was introduced with 76140 Iron Man Mech and that figure has subsequently appeared on numerous occasions, including here. Greater variety would be appreciated, although this colour combination of red, dark red and metallic gold looks fantastic. The golden faceplate appears particularly attractive, contrasting against the white eyes.

Outstanding decoration continues across the legs and the reverse of the torso, where metallic silver accents are prominent. Additionally, I love the dark tan highlights which are visible within metallic gold panels, producing lovely texture. Removing the helmet reveals Tony Stark’s head which features a heads-up-display on one side and a standard smiling expression on the other, as normal.

Thanos lacks an alternative expression, instead conveying permanent anger! This minifigure originates from 76141 Thanos Mech and his diminutive appearance worked quite nicely there, given the comical nature of those mechs. I think he suits the 4+ range perfectly too, especially because Thanos’ bigfig appearances are restricted to more expensive sets.

The malevolent Mad Titan sports a golden helmet, matching continued metallic gold designs across his torso. However, the legs are undecorated which is disappointing because the last minifigure from 76141 Thanos Mech did feature printed legs. Nevertheless, I think this villain appears sufficiently intimidating with plain dark blue legs instead.

Neither minifigure incorporates new printing but unique trans-light blue and trans-orange bases are provided. These exclusive elements somewhat resemble the power accessory packs which have accompanied earlier sets, featuring similar texture around their edge. However, the pieces include two studs with anti-studs underneath on this occasion, firmly securing a minifigure.

Of course, Thanos rarely appears without the Infinity Gauntlet. Its design varies considerably though and this golden element returns from 76072 Mighty Micros: Iron Man vs. Thanos. The knuckles could perhaps have included colourful printing to represent Infinity Stones, although simplifying the gauntlet complements the minifigure. Moreover, I like the muted colours of the protected plinth, ensuring that the Infinity Gauntlet stands out.

Thanos rarely requires vehicles or weaponry, particularly when wielding the Infinity Gauntlet. Nevertheless, an impressive cannon is provided here, launching a rubber-tipped missile that launches when a button is pushed. The function works nicely and I appreciate the consistent colours between Thanos and this weapon, despite the Mad Titan seeming unconcerned with such matters!

Printed 2×3 pentagonal tiles are attached on either flank, returning from 76141 Thanos Mech, while the dark blue 2×3 curved slopes around the base are brand new. Thanos can sit neatly above the missile launcher but without controls, unfortunately. While this weapon looks good, Thanos’ presence in a 4+ set offered LEGO an amazing opportunity to produce the infamous Thanos-Copter and it is unfortunate that was not taken.

Contrasting with his opponent, Iron Man employs numerous vehicles throughout the comics. This distinctive craft is constructed around the established 12×12 fuselage base component which has proven remarkably versatile. The element certainly feels robust which is great for young children and I appreciate the contrast between this light bluish grey piece and the red bodywork.

The vehicle measures 12cm in length and features projecting vertical stabilisers. They appear disproportionately large in my opinion and could perhaps have been replaced with one central stabiliser. However, I do like the adjustable dark red elements on both sides, matching another dark red component which is situated between the stabilisers.

Consistent colours continue throughout this model, including around the cockpit where trans-light blue windscreen elements form an appealing shape. The golden accents look superb as well, beginning on a printed component towards the front. This element also integrates an arc reactor adorns the nose, presumably generating energy which powers the aircraft.

Unfortunately, viewing the model from behind reveals the exceptional simplicity of the engine nacelle. This design appears too basic in my opinion, although I do recognise that the 4+ age recommendation restricts alternative possibilities. The disc launchers, on the other hand, look reasonable and remain easily accessible beside the engine for play.

76170 Iron Man vs. Thanos was designed for younger Marvel Super Heroes fans and satisfies that requirement. These models comprise basic construction techniques and their appearance does therefore suffer somewhat, albeit not to the dramatic degree sometimes seen elsewhere! The integration of the functions is particularly impressive, especially on Thanos’ cannon where the unsightly launcher is well hidden.

These minifigures, or slightly better equivalents, are available elsewhere with 76140 Iron Man Mech and 76141 Thanos Mech. Exclusive variants could have been included and might have been appealing, although offering younger children an opportunity to acquire these appealing characters is undoubtedly the most important factor. For this age group, the price of £17.99 or $19.99 represents good value but there is little to interest older collectors here.