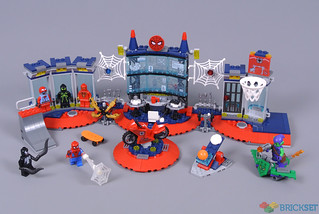 Superheroes frequently possess concealed lairs from which they operate, integrating enormous computer systems alongside cabinets for varied armours and costumes. Among these countless characters, Spider-Man is rarely associated with such elaborate sanctuaries.

76175 Attack on the Spider Lair embraces those conventions, displaying various memorable Spider-Man garbs beside an immense computer which seems decidedly reminiscent of the Batcomputer. That notable similarity to numerous Batman sets is potentially disappointing, although some impressive minifigures are included.

An updated Spider-Man minifigure has been introduced this year, incorporating new head and torso elements. This certainly represents an improvement upon the previous design from 2019, especially because printed arms are now included. Additionally, I like the bolder black webbing across each component but the absence of dual-moulded legs is rather disappointing because they did appear on the previous minifigure.

Three additional Spider-Man costumes are provided, including the rudimentary suit created by Peter Parker upon acquiring his abilities. This minifigure combines aspects of varying sources, resembling the homemade suit from Spider-Man: Homecoming in appearance while the colour scheme matches Ben Reilly’s garb. The belt and hooded jacket are fantastic, although I dislike the large spider emblem on the reverse.

Peter Parker’s double-sided head is shared with several past minifigures, displaying cheerful and worried expressions. These seem appropriate for the character and I love the printed hat which was designed for 76129 Hydro-Man Attack, representing Spider-Man’s raised mask. An alternative dark brown hair piece and trans-clear head are provided too, along with trans-clear web accessories that return from 76174 Spider-Man’s Monster Truck vs. Mysterio.

The classic Iron Spider suit has appeared in various Marvel Super Heroes sets, although this example remains unchanged from 76151 Venomosaurus Ambush. The intricate armour design and metallic gold decoration looks splendid, especially with the supplementary articulated arms. However, the decoration does not continue on the legs and I would have favoured another new Spider-Man variant to replace this one.

My favourite of these minifigures is undoubtedly Ultimate Spider-Man, whose design takes inspiration from the comic-book Stealth Costume and looks absolutely outstanding. The lime green and black colour scheme is beautiful, complemented by green and dark blue highlights. These lurid stripes correspond exactly with the source material and I anticipate the minifigure becoming as popular as the original suit, which has become known as Big Time Spider-Man!

Villains frequently accompany these superhero sanctuaries and two such minifigures appear here. Venom has remained unaltered since 2019 and seems suitably fearsome, featuring an intimidating head with bared teeth. The torso design is comparatively simple but matches the character’s traditional comic appearance and I see little justification for alterations.

Green Goblin has been updated though and appears better than ever, in my opinion. Purple dominates the design and his clothing is completely tattered, conveying the unhinged psyche which characterises this villain! The detailed dark bluish grey padding on his chest and knees looks wonderful too, along with Green Goblin’s double-sided head and accurate headgear.

The head features an evil grin on one side and a grimace on the other, both of which appear perfect for this character. Unfortunately, he is equipped with a pearl silver stud shooter rather than pumpkin bombs while Venom carries black tendrils. These new pieces were presumably created for another purpose but look appealing here, although I have found them surprisingly difficult to clip into the Symbiote’s hands.

Green Goblin is almost invariably accompanied by his Goblin Glider, the design of which has changed frequently. This example is relatively large and features angular wings, supported by rigid A-frame elements underneath. The resulting shape seems fittingly intimidating, especially in combination with the 2×3 pentagonal tile at the centre which displays decorative yellow eyes.

The colour scheme of green and purple is attractive and I like the contrasting horns which are situated towards the front. The thrusters mounted on the underside look reasonable too. This vehicle omits dedicated control surfaces, although that reflects the source material as Green Goblin generally directs his glider by shifting his weight. Fortunately, there is sufficient space where he can stand.

Of course, the view from behind is considerably worse as some unsightly colours are visible, notably including a conspicuous trans-green plate at the centre. However, the base structure does feel exceptionally robust and the entire model is easily transportable, although that is of limited importance for location-based sets which are typically going to remain stationary.

Spider-Man possesses various vehicles throughout the Marvel Super Heroes range and his concealed lair contains a maintenance area for one such vehicle. The colour combination of dark blue and red continues here to good effect and I like the trans-yellow lights beneath the motorcycle. Additionally, this vehicle can rotate on its elevated plinth and seems accordingly attractive.

LEGO has produced several motorcycles belonging to Spider-Man, including many elaborate mechanisms and aesthetic features. This vehicle lacks such complexity, instead incorporating the standard motorcycle fairing element that is decorated with stickers on either side. Webbed designs and blue highlights are integrated neatly, although the white antenna towards the rear appears awkward to me.

Advanced computer systems are valuable assets to any superhero and Spider-Man certainly impresses in that regard. His computer display features six trans-light blue screens which are decorated with individual stickers and packed with references! Applying those stickers is quite tricky but they look fantastic, undoubtedly improving upon the recent Batcomputer from 76122 Batcave Clayface Invasion.

However, I think this computer could have been further separated from Batcomputer designs, simply by adjusting the screen arrangement. This configuration seems extremely familiar and Spider-Man deserved something tailored more specifically to him. The seat seems very basic too, although some appealing details are present. Peter Parker’s camera and the video game controller are particularly fun.

The accompanying video game screen displays Spider-Man swinging through New York City. Certain aspects of the design resemble the recent PlayStation 4 game, although not perfectly. Five varying Spider-Man suits appear beside the video game, including one which is enlarged and reminds me of the original Spider-Man minifigure from 2002. However, the most intriguing example is the Bombastic Bagman costume!

Enjoyable details continue across the higher level of screens, notably including an email from the infamous J. Jonah Jamieson! The character seems absolutely furious with Peter, as usual. Iron Spider’s supplementary arms appear on the neighbouring screen, alongside Spider-Man’s nimble drone which corresponds exactly with the physical element.

Two such drones flank the computer, adorning webs. This mechanical spider component was originally created for NEXO Knights but seems ideal for Spider-Man, having accompanied the hero thrice before. The prominent Spider-Man branding above this computer looks marvellous, although I was somewhat disappointed to discover that this is formed using a sticker.

Various pearl silver tools are stored underneath the drones. Unfortunately, they are relatively inaccessible, situated behind a support for the Iron Spider’s separate arms. This entire model lacks cohesion in my opinion and the absence of connective walkways or steps is certainly an important detrimental factor. 76122 Batcave Clayface Invasion exhibited the same issue.

Furthermore, details are noticeably limited. The trans-light blue display cases for Spider-Man costumes appear bland and the aforementioned rack where the arms are stored seems quite disappointing. However, the curvature of these display cases is excellent, evoking 76125 Iron Man Hall of Armour which seems suitable given the connection between Spider-Man and Iron Man.

Peter Parker sometimes demonstrates an interest in skateboarding, hence a ramp is situated beside the display cases. This design looks good, although I think separating the leisure area from crime-fighting equipment would have improved the entire model. Instead, those sections are arranged at either end of 76175 Attack on the Spider Lair which seems illogical.

For instance, the prison cell at the opposite end is overshadowed by a basketball hoop. Both subjects are ideal for Spider-Man’s refuge but this configuration seems completely ineffective. Moreover, the single weight which is placed in a rack beside the cell seems out of place and I think the designer could easily have included a much more substantial exercise space.

However, I appreciate the consistent design features which appear repeatedly throughout the model. Trans-yellow elements are ubiquitous and the prison cell reflects the costume displays, although that decision has compromised its size. There is ample space for a minifigure though and the differing modules can be reconfigured very easily, detaching from the base and linking together using clips.

The basketball hoop is certainly an unusual inclusion but looks good, especially because the backboard features an identification badge from Spider-Man: Into the Spider-Verse! That was presumably the primary inspiration for this model so the reference is welcome. The basketball launcher is superfluous though and those elements should have been used to improve details elsewhere throughout the lair.

76175 Attack on the Spider Lair presents an interesting concept which provides spectacular creative potential, as demonstrated during Spider-Man: Into the Spider-Verse. However, this execution is poor. The model appears jumbled, lacking successful cohesion as the disparate sections seem almost unrelated. The central computer is the only structure which looks truly impressive, in my opinion.

Fortunately, this minifigure selection is more appealing and I am particularly delighted with the Stealth Suit. The integration of enjoyable references is also appreciated, although they cannot excuse disappointing design. Additionally, the price of £69.99 or $69.99 feels rather expensive and further impedes this set, despite those superb minifigures which may be worth purchasing separately.