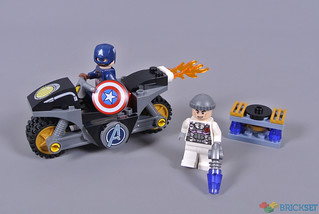 The accompanying motorcycle seems especially simple, reflecting the 4+ age recommendation. However, I think this model looks reasonable and several unusual elements are supplied. Moreover, the minifigures alone may be enough to interest Marvel Super Heroes collectors, especially given the modest cost of £8.99 or $9.99.

Captain America minifigures have changed since the Avengers: Age of Ultron range became available during 2015, now featuring removable headgear. This component displays authentic decoration, featuring decorative wings on each side. The double-sided head underneath looks excellent too, including a printed strap which complements the separate helmet.

The torso appears similar to its 2015 counterpart, by comparison. This design has remained consistent, with only subtle refinements to the metallic silver star on Captain America’s chest and improved detail across his reddish brown belt. Unfortunately, the legs remain plain which certainly detracts from the minifigure, although I appreciate the accurate dark red gloves.

An alternative medium nougat hair element is included to replace the helmet. Steve Rogers’ smiling face looks reasonable and the character wields his famous printed shield, as normal. Unfortunately, the decoration on my shield is off-centre so I hope this issue will not prove too widespread, since the error is noticeable.

While alterations to Captain America are relatively minor, other than his headgear, the Hydra Agent scarcely resembles his predecessor! This minifigure looks appealing, sporting realistic snow camouflage which appears perfect for the Sokovian environment. Ideally, these designs would continue across the torso and legs, but the body armour includes fantastic detail.

I am particularly impressed with the pixelated pattern underneath the soldier’s chest armour, matching the gloves and knitted cap. Furthermore, the sinister Hydra symbol decorates both sides of the torso and the minifigure’s facial expression appears fittingly evil, following its two previous appearances with a Harry Potter reference book and 75288 AT-AT.

Captain America frequently employs motorcycles during missions and this design takes loose inspiration from the vehicle featured in Avengers: Age of Ultron. The black colours correspond with the onscreen Harley-Davidson and I like these proportions, making great use of elements intended for 4+ motorcycles. This chassis was introduced in 76172 Spider-Man and Sandman Showdown but appears more effective here.

The vehicle measures nearly 9cm in length, excluding the trans-orange flames. Despite being relatively large beside minifigures, this is actually among the smallest Super Heroes bikes and benefits from that limited size in my opinion. Captain America does not appear ridiculous when riding it, unlike certain previous creations which have overwhelmed the minifigure!

Printed elements are always an appealing feature of 4+ sets and this motorcycle integrates a decorated 4×3 wedge slope, displaying a yellow headlight. The shaping seems attractive here and I also like the printed Avengers emblems on each flank. Moreover, the red seat stands out nicely against the muted bodywork, providing ample space for Captain America.

Two trans-orange flames are positioned at the rear, denoting exhausts. The white component supporting these flames looks great and some interesting new wheels are available here. The tyres cannot be removed from their golden hubs which seems unusual, evidently reflecting the young age recommendation. The yellow Technic pins are uncommon too, returning from 76172 Spider-Man and Sandman Showdown.

Avengers: Age of Ultron introduces the Avengers while dismantling Hydra’s network of bases, where Chitauri technology is being used. This disc launcher therefore features pearl gold and trans-purple pieces which distinguish Chitauri weapons. Helpfully, the gun situated on top can be removed and carried separately by the Hydra Agent.

76189 Captain America and Hydra Face-Off was developed for young children and definitely seems appropriate for that audience. Both models are easy to assemble and brilliant for play, without compromising their appearance too significantly. However, the unique minifigures are undoubtedly the highlight because they both look marvellous.

Captain America combines the best qualities of previous and modern designs while the Hydra Agent achieves much greater accuracy than its equivalent from 2015. Of course, a completely different version of Captain America, perhaps inspired by Captain America: The Winter Soldier, would have been even better. Nevertheless, this small set has exceeded my expectations.