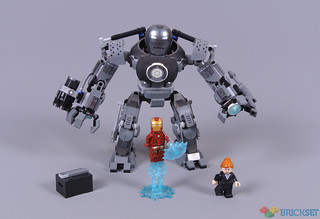 Furthermore, the enormous Iron Monger model features considerable detail, as one might envisage given the scale. Unfortunately, that scale is probably the most disappointing aspect of Iron Monger, given its notably disproportionate height beside minifigures. Hopefully such compromises will improve the function and design.

Following previous appearances from the Mark I and Mark II armours, Iron Man Mark III now completes the collection of armours from the original Iron Man movie. This minifigure includes exceptional detail, particularly across the torso where intricate armour panels are present. The dark red accents are superb too, alongside metallic gold decoration on the faceplate and each leg.

76007 Iron Man: Malibu Mansion Attack introduced the first Pepper Potts minifigure and this version improves upon the 2013 design, although I dislike the dark orange hair element. The double-sided head seems appropriate for Pepper though and her new torso works fairly well when compared with the onscreen character.

Obadiah Stane opposed Iron Man during the hero’s original movie, becoming the first Marvel Cinematic Universe villain! His availability in minifigure form is accordingly appreciated and he seems suitably threatening here, particularly because the bearded head closely resembles the original character. The combination of light and dark bluish grey in this beard is brilliant.

Additionally, the dark blue suit, which appeared with white sleeves in 71044 Disney Train and Station, seems fitting for Obadiah Stane. The villain wears dark overalls when piloting his Iron Monger suit during the film, but is more commonly shown sporting business attire. This design should therefore prove versatile, representing Obadiah throughout the movie.

Obadiah Stane’s intimidating Iron Monger armour is considerably larger than Tony Stark’s suit onscreen, although not to the extent portrayed by this design! Iron Monger measures 18cm in height and towers above minifigures which feels disappointing when displaying them together. However, this enlarged scale enables extensive detail, broadly corresponding with the original character.

Reasonable articulation is also included, enhanced by the notable scale which accommodates hinged fingers and a rotating waist joint. Comprehensive articulation is important here because Iron Monger’s stance should certainly appear heavy, as though the legs are straining to support the rounded torso. Unfortunately, the knees are fixed but their angled position looks good.

The static head, which cannot move sideways, is more limiting. Nevertheless, the decoration compares favourably with the onscreen character and I love the pearl dark grey colour here, continuing across the upper body. Neither the 3x6x1 windscreen nor the 3×4 bonnet element have appeared in this shade before and complementary accents adorn the arms and legs too.

Obadiah Stane controls his armour from a cockpit inside the torso. Raising the head reveals space for the minifigure inside, alongside a printed control panel. The integration of tiles and curved slopes looks perfect, although the cockpit should be more enclosed around the sides. Moreover, I would have liked the chest to open when accessing Obadiah Stane, for complete film accuracy.

Tony Stark’s refined Arc Reactor powers the Iron Monger armour and its circular housing is represented by a glow-in-the-dark 3×3 round tile, decorated with a clear-backed sticker. The design looks magnificent and definitely stands out against the dark armour. Furthermore, the 3×3 round tile has never appeared in this glow-in-the-dark colour previously.

Stickers are rarely applied on glow-in-the-dark elements and I was concerned this would spoil the glowing effect. Fortunately, the glow functions beautifully and reminds me of Iron Monger’s sudden appearance during Iron Man, when this armour surprises Pepper Potts upon emerging from the darkness. Ideally, the printed eyes would also glow.

Powerful pistons that support the shoulders are another distinguishing feature of Iron Monger. Two such rams are accordingly positioned here and they look absolutely superb. Furthermore, these are securely attached using ball joints and clips which can rotate in numerous directions. Once again, the shoulder motion therefore remains free from obstruction, despite the accurate pistons being included.

Heavy weapons are mounted on both arms, reflecting Obadiah Stane’s focus upon absolute firepower rather than speed and manoeuvrability. The left arm therefore features a simple tile launcher, shooting three trans-orange 1×1 round tiles as the plunger is pressed. This exposed plunger seems somewhat awkward, although I appreciate that the launcher is adjustable.

The rotary stud shooter mounted on the right arm appears more realistic than its tile-shooting counterpart. The onscreen armour features a heavy Gatling gun here, hence the stud shooter looks brilliant. Additionally, the hands include articulated fingers around trans-light blue dishes, portraying repulsors which are not deployed during the movie but are briefly visible.

While the proportions between the torso and arms correspond with the onscreen armour, the obvious gap between the legs appears odd. The broad stance is definitely effective but I think the thighs should have been enlarged, reducing the space between them. Nevertheless, great mechanical detail is present, particularly around the knees where the texture looks perfect.

Pistons are attached to each leg, matching the film and those above the shoulders. However, these are not functional because the knees are fixed in position. They look marvellous though and the ankles are articulated, providing welcome support to the whole model. Even so, I think sufficiently sturdy knee joints could have been included, as proven by 71738 Zane’s Titan Mech Battle.

Additional ammunition is provided for both the stud shooter and tile launcher. These elements are stored in a black crate which is splendid, albeit perhaps unnecessary. This addition seems particularly remarkable as this crate component has not appeared in black since 7264 Imperial Inspection was released during 2005! Presumably it has returned for another purpose, outside 76190 Iron Man: Iron Monger Mayhem.

The associated Iron Monger model seems more difficult to assess. While increasing the scale has undoubtedly enhanced the detailing, proportional problems around the legs are frustrating. The articulation is relatively limited too, although I am delighted with the functional pistons. The price of £34.99 or $39.99 also represents fair value, given Iron Monger’s scale. Even so, I think the size could have been reduced, without requiring dramatic compromises.