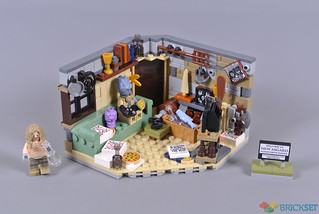 Furthermore, the environment includes superb details, seeming reminiscent of modern sitcom-based sets! The model achieves outstanding accuracy when compared with this onscreen location and various references are included as well. However, the exclusive minifigures are definitely the most interesting feature of the set.

Unfortunately, the double-sided head returns from previous versions of Thor, exhibiting cheerful and determined expressions. Neither seem appropriate for the minifigure which is disappointing because Thor’s misery is notably important to his development during Avengers: Endgame. The dishevelled dark tan hair component looks excellent though.

Korg was introduced during Thor: Ragnarok and has become extraordinarily popular, hence I anticipate this minifigure proving desirable. The new component which forms the top of Korg’s head includes fantastic rocky texture and complements the head underneath, which continues that texture through decoration. Both endearing facial expressions appear perfect as well.

These minifigures are focused upon leisure and carry appropriate accessories. Thor therefore wields a trans-clear bottle alongside Stormbreaker, while Korg includes a slice of pizza and an intricate video game controller. This element returns from 71025 Collectable Minifigures Series 19 and another is supplied inside Thor’s hut.

Korg rarely appears without Miek and this interesting character is accordingly available here. This design is undoubtedly simple, comprising a decorated minifigure head and two lavender flowers which represent the alien’s stubby limbs. However, this figure appears quite charming and the printed head looks marvellous, incorporating Miek’s insectoid eyes.

Following the destruction of their home, any remaining Asgardians relocate to the Norwegian village of Tønsberg. Those entering the village, which becomes known as New Asgard, travel past this welcome sign. The sticker corresponds precisely with Avengers: Endgame, featuring accurate text and an attractive serifed font that also matches the source material.

Thor’s messy home contains numerous intriguing curios and the model undoubtedly captures this chaotic environment. The balance between earthy shades and more vibrant colours looks superb and I think its size seems reasonable, comfortably accommodating the minifigures and various significant details which are present during the movie.

Focusing that detail upon the interior has detracted attention from the exterior, which appears comparatively bland. However, the austere entrance looks great and the textured walls seem reasonable because the original structure is constructed from roughly-hewn stone. Improved detail would have been appreciated though, perhaps including the base of the roof above the mismatched walls.

Pizza boxes are found throughout the house, featuring stickers which advertise Stormbaker’s Pizza. The red and white colours reflect the source material and some printed pizza elements are provided too. The stickered newspaper has inspired minor controversy, since the headline mentions the ‘Blip’. That typically describes the period between Thanos’ and Hulk’s respective ‘Snaps’, rather than Thanos’ original action.

Otherwise, the attention to detail remains tremendous. The sand green sofa provides room for the three minifigures and reflects the movie, while the surrounding accessories are also based directly upon the onscreen location. The black whip, for example, represents a coiled rope that appears during the film, while the flame yellowish orange feathers portray darts thrown against the wall.

Additional items include a decorative pitchfork and a model sailing boat, both of which appear onscreen and demonstrate brilliant attention to detail. The keg situated beside the door is also interesting because this features two trans-yellow 1×1 round plates, presumably depicting beer and seemingly contradicting LEGO’s long-standing policy concerning alcohol.

The fireplace is almost completely concealed, between the keg and a chest containing several trans-clear bottles and a fish. However, the trans-orange flames look splendid and I like this air conditioning unit too, under a photograph of Thor, Valkyrie, Korg and Miek during happier times. This wall also features a clip for attaching Stormbreaker, efficiently using every available space.

Among the copious enjoyable details distributed throughout this model, the most appealing is perhaps the television screen. This sticker displays a neat hybrid between Fortnite and LEGO video games, capturing the camera position and inventory panel present on Fortnite, while the stud counter and the LEGO environment originate from LEGO games. Additionally, the screen includes mention of NoobMaster69, Korg’s apparent nemesis!

Furthermore, this model achieves fantastic accuracy when compared with the source material, integrating numerous subtle details from the movie alongside more prominent references. This set costs £27.99 or $29.99 which feels fairly expensive, although I find the minifigures and their jumbled environment sufficiently appealing to warrant that price. After all, the set contains Korg!