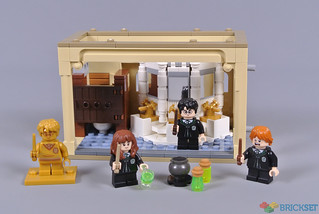 LEGO Harry Potter was introduced during 2001 and numerous appealing models have become available subsequently. Nevertheless, there are various memorable moments which have been overlooked, including the blending of Polyjuice Potion during Chamber of Secrets.

Harry Potter and his friends prepare to infiltrate Slytherin common room by acquiring suitable robes, hence these minifigures feature the unique dark green colours of Slytherin. I appreciate the consistency between these robes and those belonging to other Hogwarts houses. The new design looks splendid, although I would welcome slight variation between the Slytherin robes.

Alternative hair pieces and faces are provided for Harry and Ron, disguising these heroes as Gregory Goyle and Vincent Crabbe, respectively. Hermione Granger memorably attempts to disguise herself too, with problematic consequences. The talented witch accidentally muddles Millicent Bulstrode’s hair with one from her cat, thus partially transforming into the feline!

This unusual component slots over Hermione’s head and looks splendid, displaying a fittingly concerned expression. Moreover, the consistency between the texture of Hermione’s hair and this element is marvellous. Some appealing accessories accompany the minifigures, including two potion jars, a cauldron and an exclusive dual-moulded glass which contains an interesting trans-bright green liquid.

Moaning Myrtle’s bathroom contains the concealed entrance to the Chamber of Secrets. Even so, this important location has not been represented at minifigure-scale and looks immediately recognisable here. This characteristic arrangement of basins seems particularly distinctive and scaling the bathroom down has proven successful, recreating the necessary details.

The extensive internal furnishings limits options for the exterior, which appears relatively bland. Nevertheless, the presence of exposed medium nougat masonry bricks corresponds with other sections of Hogwarts Castle and I like the protruding lattice window. The sand green 1×1 slopes above this window are satisfying too, again complementing equivalent models.

Despite the restricted space, these basins recreate their onscreen shape successfully. There should be eight separate basins but three is sufficient and their white colour stands out nicely beside the neighbouring walls. In addition, I like the reflective stickers which represent mirrors and the stacked 1×1 round bricks create excellent texture, reflecting the source material.

Unfortunately, this scale does not provide an opportunity to include any distinguishing snakes which identify the Chamber of Secrets’ entrance. The opening function works perfectly though, revealing a hole through the floor underneath. Additionally, the beam which would obstruct this opening basin can be removed easily, as demonstrated below.

76389 Hogwarts Chamber of Secrets accommodates this model neatly, connecting above the slide which leads into the mysterious chamber. Minifigures can slot through the hole with ease and such continuity between sets is impressive. The consistent architecture looks attractive as well, since identical 1x6x7 arch elements appear in 76386 Hogwarts: Polyjuice Potion Mistake and 76389 Hogwarts Chamber of Secrets.

The wooden toilet cubicle closely resembles the onscreen location, making brilliant use of the stable door element. Once again, space is restricted and this structure is accordingly built into the wall, although I think that arrangement seems reasonable. This colour combination of dark brown and reddish brown also appears appropriate.

Opening the door reveals the toilet inside. Like the surrounding cubicle, this toilet is integrated with the external walls and certainly appears realistic. However, the original bathroom features toilets with high-level cisterns and assembling those here would have been superb, particularly to differentiate the older Hogwarts Castle toilets from modern examples.

76386 Hogwarts: Polyjuice Potion Mistake contains everything required to recreate Harry, Ron and Hermione’s first experience with Polyjuice Potion! The bathroom contains numerous noted details from the movie, including the distinctive sink configuration, the entrance to the Chamber of Secrets and the cubicle where Hermione takes refuge, following her accident.

Of course, the minifigures are similarly important and also look excellent. Hermione’s cat head appears particularly detailed, while these versions of Crabbe and Goyle are appreciated, since those characters have remained absent since 4735 Slytherin was released during 2002. I think the price of £17.99 or $19.99 represents great value too, hence I would recommend this set.