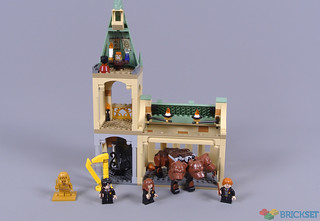 Numerous memorable subjects have appeared frequently throughout the LEGO Harry Potter theme. However, the secure third-floor corridor remains noticeably uncommon, only appearing twice since this impressive range was launched twenty years ago.

76387 Hogwarts: Fluffy Encounter shares some interesting similarities with 4706 Forbidden Corridor, representing exactly the same location and integrating certain consistent functions. Of course, the most notable continuity between them is the presence of Fluffy, although his appearance has changed dramatically since 2001.

Upon discovering that somebody is attempting to seize the Philosopher’s Stone, Harry Potter and his friends enter the underground chambers to protect it. The minifigure features a familiar tousled hair component and his double-sided head is common as well, appearing in fifteen sets since 2018. This design remains effective, but an alternative would be appreciated.

Ron Weasley also integrates an existing head, displaying cheerful and frightened expressions with unusually large pupils. However, each character wears new Hogwarts robes which feature the Gryffindor colours and some pleasing texture. The variation between minifigures is splendid, although I would question whether such frequent changes to students’ uniforms are necessary.

Additionally, the heroes wear casual clothes when entering the underground chambers during the movie, although their Hogwarts robes are worn upon initially encountering Fluffy. However, the presence of all three characters is welcome, completed with Hermione Granger. As usual, her hair piece looks marvellous and each minifigure wields an appropriate dark brown, reddish brown or dark tan wand.

This component is shared with the celebratory versions of Harry and Ron, available in 76386 Hogwarts: Polyjuice Potion Mistake and 76388 Hogsmeade Village Visit, respectively. I would prefer completely distinct decorations, although the exclusive heads and hair elements assure sufficient variation between characters. Each minifigure is connected to a golden display base and carries a pearl gold wand.

The exterior appears similarly generic, although I appreciate such consistency throughout the new Hogwarts modular system. Several medium nougat elements are distributed across each model, complementing the tan pieces. Furthermore, the textured rocks seem reasonable while these sand green roofs remain consistent between sets.

The third-floor corridor space is sparsely furnished, containing two candles, a chicken leg and the harp which is enchanted to keep Fluffy asleep. This instrument is cleverly constructed and captures an appropriate shape, with stickered strings at the centre. However, the bright yellow colour appears decidedly awkward, presumably resulting from the limited selection of available pearl gold elements.

While some recessed statues or ornaments would have been excellent, this corridor needs to remain relatively empty to accommodate Fluffy! Hagrid’s petrifying three-headed dog reaches 12cm long and therefore requires considerable space. Fortunately, the 1×14 brick with groove which crosses the chamber can be removed for easier access to Fluffy.

Fluffy was represented by a specialised component with extremely limited articulation during 2001, reflecting LEGO’s method of depicting animals throughout that period. This design has been completely overhauled, hence the creature now consists primarily of standard elements. Only the heads are formed using specialised components, which look brilliant.

Nevertheless, the three heads are outstanding. Despite sharing the same mould, each piece displays varying decoration to portray angry and sleepy appearances! These designs feature extensive detail and the option of displaying Fluffy asleep is appealing, although this sleeping face restricts options when posing the animal, to some degree.

When this model is displayed as the instructions recommend, the opening trapdoor becomes useless. Thankfully, each section may be reconfigured to situate the trapdoor over the Devil’s Snare, as demonstrated below. That arrangement is great for play, although the Devil’s Snare appears disappointing because the plant should have been substantially larger and integrated greater detail.

Moreover, placing the balcony structure underground seems strange, although that becomes unnecessary after combining this model with others. Once again, the interior seems relatively sparse and recalls 4706 Forbidden Corridor, including two flaming torches which are mounted on the wall. While the balcony seems adequate, perhaps these pieces could have created the entrance for the Chamber of Winged Keys instead.

The upper floor seems disproportionately detailed beside the aforementioned chambers. The precise purpose of this space is unclear, although the banners appear appropriate for Ancient Runes or Divination. Applying this sticker on the concave surface of the 8x4x6 half cone piece was remarkably difficult, but the design looks fantastic and contains a depiction of a 2×4 brick! The colourful potions bottles and jars are appreciated too.

The updated Hogwarts modular system has proven somewhat divisive, although both 76386 Hogwarts: Polyjuice Potion Mistake and 76389 Hogwarts Chamber of Secrets have definitely provoked positive responses. 76387 Hogwarts: Fluffy Encounter seems less successful in my opinion, particularly because the arrangement of different sections is inefficient.

Moreover, most individual rooms are exceptionally bland, while Fluffy’s light bluish grey pieces completely spoil his appearance. These minifigures are appropriate, but only golden Hermione features exclusive elements. Even though the cost of £34.99 or $39.99 feels reasonable based upon the size of this structure, I would not recommend 76387 Hogwarts: Fluffy Encounter.