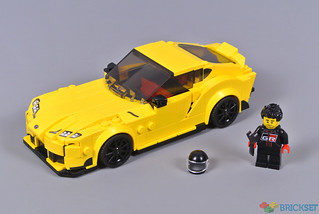 However, criticisms have been directed towards the shaping, particularly across the front because the structure appears comparatively bulky. Additionally, the stickered headlights look awkward, covering several pieces. I appreciate the significant differences between previous Speed Champions models and this example though.

Speed Champions minifigures are usually branded to match their respective vehicles and this example maintains that convention, displaying prominent Gazoo Racing decoration. The black and red colour combination looks brilliant, complemented by white accents around the emblem. The recognisable Toyota logo adorns the reverse, as anticipated.

The double-sided head includes different smiling expressions and an alternative hair piece is provided to replace the helmet. Unfortunately, the Toyota GR Supra cannot accommodate the chosen component, which is relatively tall. That seems surprising because many other options are available, including several that would fit beneath the roof.

Several generations and variants of the Toyota Supra exist, beginning during 1978. The latest design, which is depicted here, was launched during 2019 and this creation closely resembles the original vehicle. I am especially impressed with the distinctive radiator grille which certainly appears recognisable and necessitates some elaborate construction techniques!

Furthermore, this model seems reasonably accurate when viewed from the sides. The cockpit position differs from other Speed Champions vehicles, moving closer to the back and therefore reflecting the source material. However, I think this windscreen component appears too angular and detracts from the design, particularly around both sides where the dramatic angle becomes most visible.

The aforementioned radiator grille is among the most interesting features of the Toyota GR Supra. Replicating its unusual shape was accordingly important and I think the design looks good, making exceptional use of brackets and differing slopes to produce an accurate profile. The pronounced nose section appears slightly awkward, although compromise was probably unavoidable at this scale.

Speed Champions models commonly include unorthodox construction methods. The radiator section demonstrates many such techniques, projecting studs in four directions! However, the headlights above the radiator have provoked criticism. Three stickers comprise each headlight, resulting in unsightly gaps between them. The layered curved slopes are disappointing as well, although no suitable alternative is currently available.

Additional stickers form curved bonnet vents and the door panels achieve excellent accuracy too, featuring realistic intakes which appear beautifully narrow. Unfortunately, this windscreen element should be steeper when compared with the source material. Enhancing this structure would have required an entirely new element, but I think that was probably justified here.

The interior is relatively simple, although I appreciate this red upholstery which is available in reality. Unlike several other Speed Champions vehicles, this model lacks a gearstick because the actual Toyota GR Supra is exclusively available with an automatic gearbox. Such attention to subtle details is impressive, although a stickered console would have been welcome.

Dramatic curvature around the rear wheel arches is another distinguishing feature of the GR Supra and these 1×4 curved slopes look marvellous. Additionally, I love how the elegant side skirts are assembled, integrating black brackets nearest to the wheels where the skirts widen. Recreating such details generally requires stickers, hence their avoidance here is remarkable.

Moreover, printed elements are positioned towards the back, forming the Gazoo Racing logo above the unconventional rear fog light. This decorated 1×1 slope appears relatively versatile, so the presence of a spare is pleasing. The twin exhausts look superb as well, matching other Speed Champions cars where the rear structure frequently seems the most authentic.

76901 Toyota GR Supra exhibits numerous appealing details and obvious attention has been paid to the source material. However, I think the source material creates challenges which the present collection of LEGO parts is unable to overcome, particularly around the headlights and windscreen. These important sections certainly leave something to be desired.

Nevertheless, I am pleased with the radiator grilles and the bodywork shape towards the back, which each avoid relying heavily upon stickers. I think the price of £17.99 or $19.99 represents good value too, although 76900 Koenigsegg Jesko is my favourite among the three new Speed Champions models which occupy this price point.