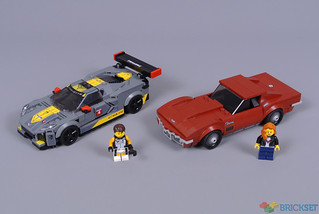 The associated Chevrolet Corvette C8.R features extensive detail too, although the shape deviates somewhat from the source material around the nose. Nevertheless, these GT cars have proven excellent before, hence I anticipate similar distinction here. The celebrated 1968 Corvette seems more interesting though, in my opinion.

The considerable differences between these vehicles is reflected in their drivers. The female minifigure features a black jacket with the Chevrolet Corvette emblem on the reverse and the same design decorates her shirt underneath. Components like these can prove useful beyond the Speed Champions theme, wherever generic characters are needed.

While the first minifigure appears reasonably casual, the second sports accurate black, white and yellow overalls which are associated with Corvette Racing. These colours are impressive while the tiny advertisements are splendid. However, the continued printing between the torso and legs looks dreadful, primarily because LEGO continues to encounter issues when printing lighter colours on darker elements.

Crash helmets in appropriate colours are supplied with each minifigure, alongside fitting hair elements. These and the single-sided heads are relatively common, although they look good. Unfortunately, this female hair piece obstructs the roof on the 1968 Chevrolet Corvette, which remains frustrating because I believe this could be avoided.

The renowned Chevrolet Corvette C3 was introduced during 1968 and maintains continued influence today, attributed primarily to the characteristic curves above the wheel arches and unusual pointed nose. These important features are captured on the LEGO model, although compromises are also apparent where the shape presented particular design challenges.

Matching other Speed Champions vehicles, this car is eight studs wide and measures 17cm in length. The proportions therefore appear reasonable, although I dislike the angular windscreen which varies significantly from the source material. However, the dark red bodywork is fantastic and contrasts against previous Speed Champions models which is appreciated.

The distinctive pointed nose is constructed using 2×4 wedge plates. The resultant shape looks good, although the transition between these plates and the neighbouring curved slopes seems awkward. Unfortunately, improving upon this design would probably necessitate the creation of unique elements. However, the stickers situated underneath look superb, accurately portraying the radiator grille.

Additional stickers portray vents and metallic trim along either flank. These stickers are clear-backed, so they may be used on models in alternative colours, although dust and air bubbles are sometimes visible. The printed wheel covers avoid such problems and they look excellent, displaying an attractive radial design. Another printed dish is provided, as a spare.

Removing the windscreen reveals ample space for two minifigures inside, around a simulated handbrake. As normal, the steering wheel is offset slightly which is irritating, although I like the stark contrast between the dark red exterior and the black interior. Both the 1×4 slopes and the 2×6 tiles incorporated here have never appeared in dark red before.

The least successful aspect of the Stingray is certainly the rear, which lacks proper curvature when compared with the source material. I understand the difficulty in capturing subtle curves but some shaping around the wheel arches was an absolute necessity. The twin exhausts and rear lights achieve impressive accuracy though, accentuated by stickers between them.

While the 1968 Chevrolet Corvette incorporates clear-backed stickers, those decorating the Chevrolet Corvette C8.R feature opaque backing. These are certainly simpler to apply in my opinion, although their quantity remains intimidating! Some 31 stickers adorn the vehicle and replicate authentic designs from the original touring car, alongside a few printed elements.

While certain distinguishing shapes from the source material are captured here, the general profile appears rather blocky. That becomes especially visible when viewing the vehicle from each side, where the horizontal lines above both wheels are conspicuous. However, I like the unusual colour combination of dark bluish grey and yellow, with authentic red accents.

Despite their substantial separation in time and technology, both Chevrolet Corvettes should integrate similar pointed nose shapes. Unfortunately, this distinctive feature is missing, which noticeably detracts from the whole model in my opinion. Moreover, this splitter should capture the same angular aesthetic and the vehicle is hardly recognisable without it, despite featuring accurate details.

Another disappointing issue relates to colour matching between the stickers and actual parts. This should be easily resolvable so the pronounced difference on dark bluish grey pieces, for example, is frustrating. The stickered designs are excellent though, particularly on the bonnet where the stripes and asymmetrical racing decals look wonderful.

Accurate designs continue onto the sides, where 1×2 curved wedge slopes are employed to good effect, creating realistic air intakes. The red racing numbers and matching door mirrors demonstrate similar authenticity, although I think the mirrors should reach further beyond the bodywork. Furthermore, unsightly gaps remain exposed around the dual-moulded wheels.

The windscreen includes intricate metallic silver highlights and is easily removable, providing access to the interior. There is adequate room for two minifigures and the dashboard shaping looks splendid, as normal. Superb detail continues behind the cockpit, where the yellow stripe matches beautifully and terminates underneath the adjustable rear wing.

Tooth pieces are ingeniously integrated around the lights, forming perfect shapes. Otherwise, the rear appears fairly simple, featuring five stickers across tiles and curved slopes. They are faithful to the original car but the overwhelming reliance upon stickers is obvious. The diffuser seems appropriately dramatic though, closely resembling the source material.

76903 Chevrolet Corvette C8.R Race Car and 1968 Chevrolet Corvette includes two vehicles from completely different periods, thereby maintaining a convention which has proven divisive. However, this instance seems fairly tolerable because the cost of £34.99 or $29.99 represents good value for two Speed Champions cars, particularly within the US.

Unfortunately, the standard of these cars leaves something to be desired. Both models feature positive qualities, including the 1968 Stingray’s bulbous wheel arches and authentic decoration across the modern Corvette C8.R, but the shapes are commonly inaccurate. This is particularly discernible on the touring car, where reproducing the characteristic pointed nose was important and its omission is decisive.