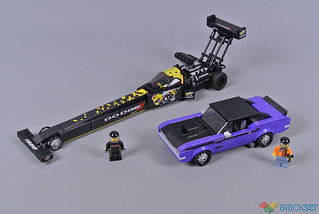 Drivers are provided with both vehicles, wearing completely different racing attires. The male minifigure is intended for the Dodge Challenger, according to packaging images. That seems somewhat odd because his orange shirt displays Dodge’s famous ‘Angry Bee’ emblem which decorates the Top Fuel Dragster, rather than the classic Dodge Challenger.

Nevertheless, this branded shirt looks superb and the double-sided head, belonging to Duke DeTain, works nicely. The female character features comparable detail, although her overalls appear more modern and share their colours with the Mopar Dodge//SRT Dragster. I love the yellow stripes and subtle stitched patterns, accompanied by Dodge symbols at the centre.

Both minifigures include black helmets with opening visors and alternative hair elements are provided too. These are relatively common but look reasonable and the black component fits inside the Dodge Challenger, unlike several examples released during 2020. The female hair element cannot fit inside the Top Fuel Dragster, although one should probably sport a helmet when driving a dragster!

Dodge has appeared previously in the Speed Champions theme, represented by 75893 2018 Dodge Challenger SRT Demon and 1970 Dodge Charger R/T. Comparisons have accordingly been drawn between this Dodge Challenger T/A and the equivalent Dodge Charger since both vehicles originate from 1970 and share visual similarities. Their angular designs are especially consistent.

The purple and black livery, officially known as ‘Plum Crazy Purple’, was available during 1970 and distinguishes this model among other cars. The black stripe through the centre is correctly positioned and those on either flank also correspond with the original vehicle, nicely combining black elements with clear-backed stickers to create a continuous stripe.

Chiselled shapes have become inherently associated with Dodge, particularly around the radiator grille which is beautifully rendered here. The clever use of purple tiles to enclose the headlights and radiator is marvellous and I like the round headlights as well, further replicating the source material. The trans-orange indicator lights, located beneath the headlights, appear equally authentic.

Unfortunately, the shaping does deviate from the original vehicle in some important respects. Subtle curvature should continue above the wheel arches and around the doors, although no appropriate elements are available to recreate such curves. Additionally, the intake above the engine appears slightly too prominent, but I consider that excusable given the modest scale.

As usual, the doors cannot open but the roof is removable, revealing dark bluish grey seating inside. These seats look relatively basic but accommodate minifigures neatly and the controls seem adequate, comprising the steering wheel and gearstick. One aspect of this model which does disappoint is the door mirror colour because I believe they should be purple, based upon reference images.

Extensive detail continues when viewing the Dodge Challenger from behind, where trans-red tiles depict the characteristic rectangular lights. Suitable branding appears between these two lights and another sticker adorns the spoiler. The yellow number plate is fittingly positioned too, integrating an inverted 1×2 slope. In fact, the whole lower section is attached upside down.

LEGO has released numerous Top Fuel Dragsters at different scales, although the enormous Mopar Dodge//SRT Top Fuel Dragster is unlike any previous examples! The spectacular scale permits extensive detail and the vehicle looks accordingly excellent, measuring 34cm in length, with the adjustable rear wing excluded. The size beside minifigures therefore seems extremely large, although it does correspond with other vehicles.

The proportions appear accurate when compared with the source material, featuring a fittingly elongated nose and low ground clearance. The black and yellow colour scheme looks realistic too, although certain alterations have been implemented to these graphics. Numerous stickers are accordingly necessary, although I was delighted to discover that the cockpit is printed.

Dragsters traditionally include narrow front wheels, represented here by spoked components which were developed for LEGO wheelchairs. Their shape and size look reasonably accurate, although the bodywork shaping between the wheels could be enhanced. This structure seems comparatively bulky towards the front and I dislike the visible dark bluish grey plate beside the wheels.

An attractive honeycomb pattern adorns the nose section, comprising eleven stickers across curved slopes and tiles. Lining up the designs is surprisingly simple and they look marvellous when combined, reflecting the ‘Angry Bee’ brand from the original dragster. The yellow details near the cockpit are particularly appealing, occupying numerous hexagonal cells.

Despite appearing comparatively simple from outside, the internal construction is interesting. Stacked 1x2x1 bricks with studs on three sides are arranged inside, creating a spine through this entire vehicle which is strengthened using tiles around four sides. The bodywork appears perfectly smooth and the yellow tiles underneath are effective, forming authentic stripes. The upper layer is connected using clips immediately in front of the cockpit.

Dodge branding appears prominently along both flanks, alongside an enormous ‘Angry Bee’ emblem. A similar design adorns Leah Pruett’s Mopar Dodge//SRT dragster that participated during 2019, although that bee was significantly smaller. However, I like the enlarged version and matching symbols decorate aerodynamic panels which protect the engine.

These bee and honeycomb designs continue across the cockpit canopy, which opens using hinges. Yellow decoration continues inside, where there is sufficient space for one minifigure. The cockpit is relatively tight, although this corresponds with conventional Top Fuel Dragsters, where weight and space are inevitably restricted.

The most dramatic distinction between this dragster and previous versions is undoubtedly the engine detailing. 1×1 round plates with bars depict exhausts while flexible reins form authentic cables, connecting the supercharger. The light bluish grey elements beneath this supercharger appear somewhat out of place though, among the black pieces.

Mechanical detail continues onto the opposite side, where twin fuel pumps are located beside the exhausts. The support structure under the spoiler looks fantastic, although I was surprised by the omission of a wheelie bar. The vehicle arguably looks better without the wheelie bar but that would definitely have been appreciated, as an option.

Enormous rear wings are an integral feature of Top Fuel Dragsters and this example satisfies that requirement. The whole wing is mounted on four struts which appear appropriately fragile, although they are robust and permit some articulation. Unfortunately, my least favourite aspect of the model is probably the rear wheels. Their diameter and width appear comparatively small and a unique tyre should perhaps have been employed instead.

76904 Mopar Dodge//SRT Top Fuel Dragster and 1970 Dodge Challenger T/A comprises two completely different vehicles, appealing to unique audiences. The execution of both models is impressive in my opinion, although potential for some improvement remains in each case. The aforementioned rear wheels of the Top Fuel Dragster are especially disappointing and broader racing tyres would have been beneficial.

However, the bodywork shape on the dragster looks superb, complemented by the honeycomb decoration. The purple colour scheme across the Dodge Challenger is splendid too, although I find the increased width slightly less effective for classic vehicles than with modern supercars. Moreover, the price of £49.99 or $49.99 feels somewhat expensive to me. Nevertheless, both vehicles are enjoyable.