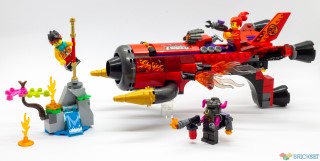 Red Son is one of Monkie Kid’s many enemies, the son of the terrifying Demon Bull King. According to LEGO, he’s a short-tempered evil genius who builds diabolical weapons, and featured in three sets last year, including 80011 Red Son’s Inferno Truck.

This year he’s back in 80019 Red Son’s Inferno Jet, but as the name implies he’s swapped the truck for an aircraft. There is still a lot of fire involved, even though it’s a much smaller build; but one that is no less entertaining or, er, diabolical…

We get three minifigures in the set, none of which are new or unique. Monkie Kid has appeared in the majority of the sets in the theme (well, it is named after him, I guess!) and the version here is identical to quite a few of last year’s. Other sets in this wave give him a new hoodie instead of the headphones, but not this one. However, it’s a fantastic design and not one that I feel needs any particular alterations.

The first antagonist is named on the box art as Bob, one of the Bull Clones. As previously, the head is an unprinted trans-red, but the pearl grey legs, torso, and helmet look fantastic with the purple horns and arms.

Finally, the eponymous Red Son features his extravagant red hair and tailcoat over detailed purple trousers. It is a shame that there’s nothing new here, considering he’s been included a couple of times before with this exact appearance and he lends his name to the set.

Both Monkie Kid and Red Son have their usual angry or happy dual expressions.

The three minifigures are given a variety of accessories. Monkie Kid’s wielding the Golden Staff, Bob is wearing a jetpack and holding a flamethrower (a great little model of only a handful of pieces,) and Red Son has his Power Glove and a pair of what LEGO describe as “firing flame-energy elements.” I’ve not personally come across these before (although they are not new), and they are quite fun to fire out of the minifigure’s hand by pressing them into his arm.

A small sticker sheet is included with the single instruction book. As usual, I’ve applied them, because I feel like they add quite a bit to the overall look of the model (and the sets are aimed at children, who love stickers; even if I do have to keep reminding myself of that!)

A small side build is included, to give Red Son’s Inferno Jet a target and Monkie Kid something to defend. It’s a miniature version of the Legendary Flower Fruit Mountain (though obviously nowhere near as impressive as set 80024!) It’s made from just a handful of pieces, but looks quite cute. A sticker on a transparent tile gives the impression of a waterfall. The pink and green tree is an effective use of just four parts.

A couple of flame elements are included, presumably so you can act out either Red Son or Bob having set the mountain on fire.

The inverted 1×1 tile with bar on the top of the mountain is actually a holder for the Golden Staff, and there’s a little green frog hidden beneath the waterfall.

The main build, however, is the Inferno Jet itself. It’s a fascinating vehicle with a very unique design, and a fantastic play mechanism built inside. It doesn’t stand at a sensible angle by itself, so the photos below include a few trans-clear bricks to hold it up that aren’t actually included in the set.

The jet’s striking red and purple colour scheme matches that of its owner; the flames down the side, coming out of the exhaust, and on the rear tail fin leaving no doubt as to Red Son’s weapon of choice.

The main body of the jet is built around a small Technic frame, but the front has been rounded with the use of various sloped tiles, and capped off by quarter-circle bricks and a large cone. The resulting shape strongly resembles that of a jet engine, albeit one that is significantly oversized compared to the rest of the vehicle! Large dual-moulded flames spew from exhausts that protrude from the engine housing on either side.

From either side of the fuselage at the front of the jet protrudes a pair of curved pearl grey arms ending in spiky pearl gold cones. Both the large “macaroni” tubes and the spiked round 2×2 bricks are new in this colour.

There’s room on top of the jet for Red Son to stand, and a control handle for him to hold onto. A great use of an unexpected part is MetalBeard’s beard being used as the front of the cockpit, which surprisingly doesn’t look out of place at all!

Three engines at the rear of the jet form a triangle, with the lower engine mounted on part of the vehicle that extends below the fuselage to form a handle, designed for children (or adults, I suppose!) to grip the model single-handedly, with a finger resting on a trigger in front. When pulled, the trigger fires a pair of concealed spring-loaded missiles out the cone at the front of the jet.

However, perhaps my favourite part of the model is the hinged section at the front. The entire front assembly detaches from the single clip at the top and folds down, allowing you space to insert the missiles and reload the jet. There is something very satisfying about unclipping the front, loading the missiles, and snapping it back into place!

Removing most of the fuselage around the chassis gives a good look at the way the trigger mechanism works. It’s very simple but effective—pulling the bottom of the trigger backwards pushes the top into the spring-loaded missiles to release them. One side of the trigger has a single 1×1 plate attached, meaning that the right-hand missile actually fires a fraction of a second before the left. It’s a tiny unnecessary detail, but one that I was impressed by. It also means that careful trigger handling allows you to fire the missiles one at a time rather than both in a single pull.

From the front, the jet is very imposing, and you can just about see the two spring-loaded missiles nestled in the cone in the photo below.

The Inferno Jet is a very swooshable model, with a brilliant play feature that children will have hours of fun with, even if it’s quite tricky to encourage them not to fire the missiles at each other when they’re literally holding the model like a gun! It looks great, in a very striking colour scheme, with a suitably wacky minifigure to pilot it.

The build of the mountain, although small, is very cute, and gives Monkie Kid something to defend against the onslaught from Red Son and his henchman. Bob does feel somewhat superfluous to the set, but I am not going to complain about the inclusion of a minifigure!