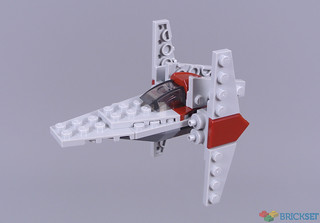 The monthly LEGO Star Wars magazine provides an unrivalled opportunity to acquire uncommon minifigures, although various brilliant miniature models appear too. They include 912170 V-wing which accompanies the newest issue and seems remarkably detailed.

Additionally, this elegant starfighter has recently appeared during The Bad Batch, becoming the leading space superiority fighter immediately following the foundation of the Galactic Empire. The model should therefore prove enjoyable.

Aerodynamic shaping is undoubtedly the V-wing Starfighter’s most important feature and that looks excellent here, particularly when viewed from the side. I appreciate the narrow fuselage and this model measures almost 10cm in length, which enables reasonable detail. The colour scheme of light bluish grey alongside dark red appears authentic as well.

However, dark red accents are missing from the prow and I think its shaping could have been improved too. These simple 2×4 wedge plates somewhat resemble the original craft, although their sharper 2×4 wedge plate equivalents might have been more effective here. Nevertheless, the canopy looks great and the complementary curve behind the cockpit compares favourably with the source material.

Unfortunately, recreating that elegant curvature has prevented the designer from including the Astromech droid which should slot behind the pilot. The trans-bright green engine nacelles are appealing though and both wings appear impressive. Their angular design matches the source material, making good use of dark red 2×3 pentagonal tiles that create an accurate shape. The laser cannons seem rather short though.

Both wings are connected to the fuselage using Technic pins, enabling them to rotate during landing. This function works nicely and matches the onscreen starfighter, although nothing is included to restrict the wing movement. Moreover, the dearth of forward landing gear seems somewhat disappointing, needing another brick beneath the fuselage for accurate display.

912170 V-wing closely resembles the onscreen starfighter and incorporates satisfying detail, particularly towards the rear where the wings and engines look appealing. The rotating wings function nicely too, although including stoppers to limit their motion would have been splendid. The absence of forward landing gear is also disappointing.

Nevertheless, this model represents an attractive addition to the selection of LEGO Star Wars magazine gifts, especially because the marvellous Alpha-3 Nimbus-class V-wing has not been available at any scale since 75039 V-wing Starfighter became available during 2014.