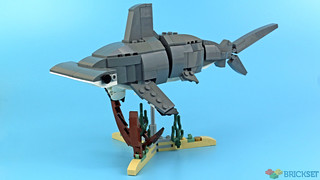 Build Better Bricks is commonly known as being a high quality instructions provider, has started providing custom sets as well. To give a sense of the sets that are available, they sent two sets along to us for review: a Monarch Butterfly and a Hammerhead Shark. The designer of the sets is none other than Tyler Clites, competitor in the first season of US LEGO Masters.

The sets come in very sturdy boxes with flip top openings such as we’ve seen on recent LEGO Ideas sets. Parts are included in a freezer-thickness Ziploc-like baggies. The general feeling from opening the sets is that you’re getting a quality product. Of course, all the parts are LEGO parts.

Instruction were included in the box for the Monarch Butterfly. I found the instructions to be clear and straightforward to follow, though definitely geared to a more advanced builder. The final result is quite realistic, and looks quite attractive.

The hammerhead shark is a larger build, so in lieu of an instruction booklet I received a link to download the instructions. I rather like electronic instructions because of the ability to zoom, and it also helps with differentiating the colours.

Here’s a screen grab of the instructions – again, quite clear and straightforward, even though the instruction style isn’t quite the same as what I’ve seen in official sets.

On to the build – the hammerhead build starts with the head and a Technic base. You can see that the joints – one rubber, one ball and socket – that can be used on finishing the model to wiggle the shark to simulate its swimming movement.

The body of the shark is all clad over the Technic base.

The build is quite substantial, here’s a minifigure for scale.

The display stand and sea greenery are included in the set – I think this is a really nice touch. It doesn’t take a lot of parts, but definitely helps to suggest movement in the model.

Tyler Clites (and his wife Amy) were in LEGO Masters for a reason. The butterfly is a lovely model. The shark is quite realistic, especially with the thoughtful addition of joints to allow the shark to simulate a swimming motion. They look great on display.

The downside to the sets is the price. On BBB’s website, Monarch Butterfly is currently offered at $24.99 for 124 pieces, and Hammerhead Shark is an eye-watering $74.99 for 289 pieces. Clearly BBB can’t take advantage of LEGO’s efficiency of scale, and the designer needs to be compensated appropriately. Hopefully BBB will find some additional efficiencies in their process to bring the price down on the sets a bit, as the models are quite nice.

I’ve noticed that they do offer 20% off sales rather frequently, so you may want to wait for one of those to buy the sets if they interest you. While you’re there, check out their instructions; they have an impressive array of them and they’re much more reasonably priced than the sets.

Visit Build Better Bricks for more information and to purchase these, and many other, models.

Many thanks to Stephen Forthofer at Build Better Bricks for providing a copy of these sets for review. All opinions expressed are mine.